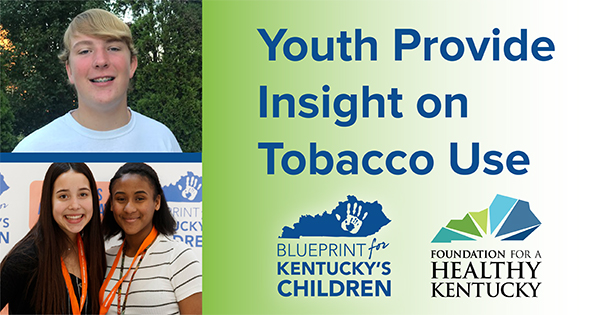 Foundation for a Healthy Kentucky

More than a third of Kentucky middle and high schoolers responding to a recent survey say the pandemic has increased students using e-cigarettes, or “vapes,” and other tobacco products. And more than 14 percent said they believe e-cigarettes are safer for them to smoke than traditional cigarettes, according to the survey, which was announced today by the Foundation for a Healthy Kentucky and Kentucky Youth Advocates.

The youth also overwhelmingly support giving local cities and counties the option to pass laws that reduce tobacco use, often referred to as local tobacco control, the survey found.

“The perspectives of these Kentucky pre-teens and teens show us that we, as a society, still have much work to do to help protect our youth from e-cigarettes and other tobacco products that can cause them so much harm, both immediately and throughout the rest of their lives,” said Ben Chandler, president and CEO of the Foundation for a Healthy Kentucky. “Public health measures to reduce the spread of Covid-19 may have increased parental oversight and reduced vaping for some youth, but certainly not for all. The children of essential workers who haven’t been able to stay home may well be the youth for whom vaping increased.”

“Through the work of the Foundation for a Healthy Kentucky, we’ve seen the success of youth as their own best advocates for health in their communities. These survey results give youth new data to share with local elected officials and urge leaders in cities and counties across the commonwealth to more quickly and effectively act on efforts to curb youth vaping,” said Terry Brooks, executive director of Kentucky Youth Advocates.

A total of 400 middle and high school students from 22 Kentucky counties responded to the survey, conducted by the Foundation for a Healthy Kentucky in partnership with Kentucky Youth Advocates, in November and December 2020.

While it is difficult to measure exactly how the pandemic is affecting youth tobacco use, this survey offers some alarming insight, Chandler and Brooks said. More than half of youth who expressed an opinion about how pandemic impacted their peers said they believed that it increased tobacco use (39.2 percent of the total).

When asked about the safety of e-cigarettes compared with traditional cigarettes, 14 percent of students surveyed reported they believe e-cigarettes are safer. But e-cigarettes contain nicotine, which is highly addictive and can harm adolescent brain development, according to the Centers for Disease Control and Prevention. Moreover, youth who use e-cigarettes may be more likely to smoke cigarettes in the future, the CDC says.

“As a dentist in Western Kentucky, I am all too familiar with the effects of tobacco and vaping products on our oral health. As a mom of four, I am even more concerned. Vaping products are misleading our youth to think they offer a “safer” alternative. We must continue work in the area of tobacco cessation and prevention to improve not just oral health but overall health,” said Dr. Laura Hancock Jones of Union County.

When asked about local tobacco control, more than 70 percent of the youth said they were in favor. Nearly a fourth said they needed additional information, and five percent opposed it. Both the Foundation and Kentucky Youth Advocates support local tobacco control to give cities and counties tools that they previously have had to improve community health. Those tools were taken away in 1996 by a state law adopted at the behest of big tobacco companies seeking to pre-empt local control. Sen. Julie Raque Adams and Rep. Kim Moser have filed bills (SB81 and HB147, respectively) in the current legislative session to restore these tools as options for local jurisdictions where there is sufficient community support.