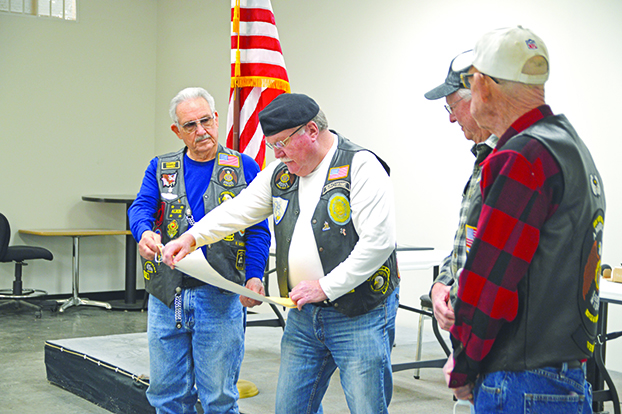 Post 46 celebrated the event with a cake. – Photo by Olivia Mohr

“Our Post has always had some members with motorcycles and an interest in forming a Legion Rider’s Chapter,” said Post Commander Tony Cromwell in an email.  “About a year ago, I asked Legionnaire Gary Clay, a longtime Legion Rider, to try to recruit enough members to form a Post Chapter.”

Cromwell said Clay contacted other riders in the Veterans of Foreign Wars of the U.S., the AMVETS and Post members. As a result, he formed 12 veterans interested in starting an American Legion Rider Chapter.

Clay designed and purchased initial Post Legion Rider patches, and Cromwell appointed Tibbetts as the temporary chapter secretary so he and Clay could complete the charter application, which was submitted this month, Cromwell said.

Cromwell said the charter allows for a group to legally form a chapter of the Department of Kentucky American Legion Riders and operate under the guidelines of the program.

“While we had an interested group of motorcyclists for some time, they were not ‘Legion Riders,’” Cromwell said. “This is the first time in the history of this Post that we will enjoy a Legion Rider chapter.” 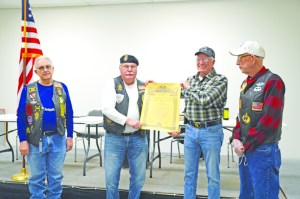 Cromwell said there are 425 chapters of American Legion Riders nationwide, and each state department establishes their own specific programs, all of which “support the national American Legion mission to Americanism and children and youth programs,” Cromwell said. The Riders also make efforts to support veterans, give to charities and honor military men and women who have died, among other efforts.

The formation of the chapter at Post 46 allows for new ways for the Post to get involved in the community and spread awareness for the Post. A chapter rides with their Legion and Post attire and can ride in events like local parades, and per the Legion mission of raising funds for children and youth programs like scholarship programs, the chapter will be able to formally ride to raise funds for the programs.

“The public recognizes this Legion organization and donates to this worthy cause,” Cromwell said.

At the event Wednesday, in a speech, Cromwell said, “Working with those youth is probably one of the most rewarding things we do.”