(This is the second part of a two-part article about a former Danville city school teacher, coach, principal and administrator. This story covers Davis’s time in education from 1992-2020.) 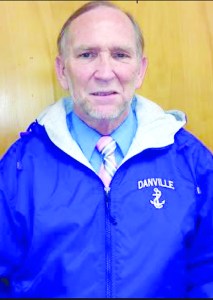 David Davis was named principal at Bate Middle School for three years in 1992 and served three years in this position. “The principal job was challenging and difficult, and there were huge commitments that cost me time with my wife and children. I was a 24/7 principal who worked the job days, nights and weekends to ensure that everything I did would further the goals of the school. At the end of the 1994-95 school year, I resigned as principal, but only after I had transferred myself back to being a social studies teacher for two more years.”

In 1997, Superintendent Bill Grimes appointed David Davis as the director of administrative services at the Proctor Street office of the Danville Board of Education.

His duties included: Oversight of career and technical and adult education, English language learners program and testing coordinator, Title IX coordinator, district contact for KDE regarding employee access to user identification and passwords for web based programs. He was a contact for extended school services coordinator and the district contact for the Southern Association of Colleges and Schools; trainer for the bloodborne pathogens program and Hepatitis B immunizations through the local health department; asbestos management plans and abatements and coordinated disposal of hazardous materials; coordinator for the monitoring and maintenance of the underground storage tank for gasoline and diesel fuel; Office of Civil Rights and later the Civil Rights Data Collection and submission projects every other year; and Danville school board policies, including the maintenance, distribution and public inquiries for these policies.

“My full-time employment with the Danville Schools ended with my ‘real’ retirement on February 1, 2014,” Davis said. 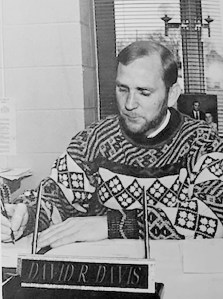 David Davis was principal at Bate Middle School in 1992.

However, after 90 days of retirement, Davis became a volunteer in the Danville schools to assist with spring assessment with David McAfee. In July 2014, Keith Look became the superintendent of the district and hired Davis as a part-time administrator at the district office.

From 2014-2020, Davis was employed in this capacity while also being the district assessment coordinator for the Burgin Independent School District.

“I count and cherish my 48 and a half years in education, having the honor of teaching and serving as a school and district leader, serving students and working in concert with many outstanding educators,” Davis said.

Davis was born and grew up in Totz, KY, a small community in the mountains of Harlan County.

He is one of nine children of John and Dolly Davis, who lived to be 91 and 99 respectively.

Davis’ wife, Monica Davis, was secretary at Toliver Elementary School for 25 years before retiring in 2011.

They have two children, David Davis II and Heather Patterson, who were educated in Danville Schools.

David II graduated from DHS and EKU and is a major in the Lexington Fire Department.

His wife, the former Katie Stallard, is a registered nurse and professional photographer. They have three children, Peyton, Parker and Presley, and live in Danville.

Heather graduated from Boyle County High School, graduated from Campbellsville University, and completed the nursing program at EKU to become a registered nurse.

She and her husband, Jeremy Patterson, a drill sergeant at Fort Leonard Wood, Missouri, have three children, Barry, Natalie and Joshua, and live on post.

David and Monica have moved to Fort Myers, Florida and he may be working in education a few more years. He has applied to transfer his Kentucky certification credentials to Florida.