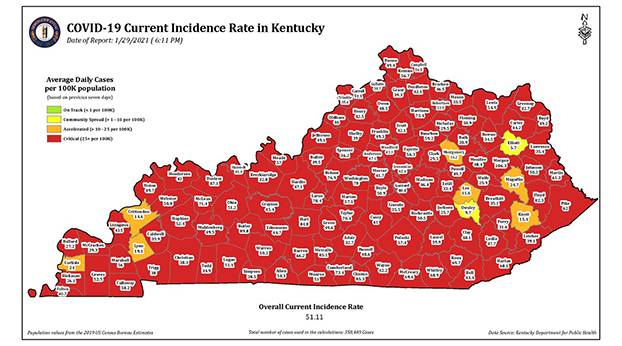 Kentucky’s COVID-19 positivity fell for the 11th straight day on Friday, while the number of new cases and deaths also decreased.

“Our declining positivity rate shows that Kentuckians are continuing to make those small sacrifices we’ve been talking about all year in order to protect each other until we get enough vaccines for everyone who wants one,” said Gov. Andy Beshear. “Wearing masks around people from different households, social distancing, washing their hands, staying home when they can and getting tested regularly.  It’s the simple things you’re probably sick of hearing about by now that can make the biggest difference as we near the finish line.”

A total of 2,608 new cases of the coronavirus were reported to state health officials on Friday, a drop of 339 from Thursday, and bringing the pandemic total to 358,478.

Kentucky also had 57 new deaths on Friday, following Thursday’s single-day record of 69.  This raises to 3,668 the number of Kentuckians lost to the coronavirus.

The latest victims ranged in age from 47 to 101.  Six were from Pike County; Fayette and Warren counties each had five; there were four in Christian, Grayson, and Jefferson counties; three in Madison County; two each in Jackson, Lawrence, McCreary, Muhlenberg, and Simpson counties; while Barren, Boone, Bourbon, Boyd, Boyle, Caldwell, Clay, Clinton, Daviess, Hart, Hopkins, Lewis, Logan, Marshall, Monroe, and Union counties each had one.

A total of 1,505 Kentuckians were hospitalized on Friday with COVID-19.  Of them, 355 were in intensive care and 199 on a ventilator, all lower than on Thursday.

Gov. Beshear does not have a live press briefing schedule until Monday afternoon at 4.  However, his office is expected to report the daily numbers throughout the weekend.

Playing and working in the snow