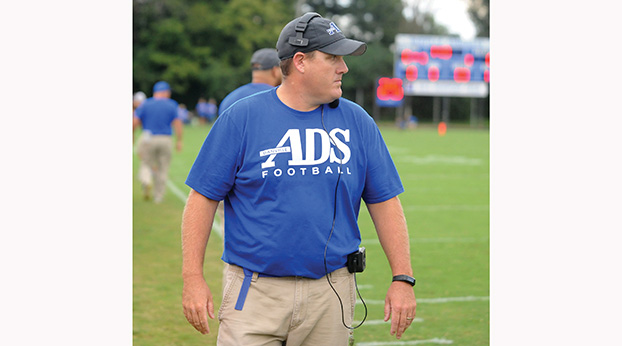 By MARTY WARREN
and ROBIN HART

Clay Clevenger, who guided Danville to the 2017 Class 2A State Championship and a 2016 Class 2A Runner-up finish, was fired after eight years as head coach of the Admirals on Friday. His eight year record was 65-32.

Clevenger, a 1996 DHS graduate, also played on two unbeaten state championship teams for his alma-mater – he was a freshman in 1992 and junior on the 1994 team.

“I had no idea this was coming,” Clevenger said. “There were some things they tried to say I had done wrong. I got a text during my planning period at 2:45 wanting to know if I was in the building. I said yes and (DHS principal Thad Elmore) asked if I could come to his office. I walked into his office and was handed a piece of paper (by Superintendent Tammy McDonald) saying that I wouldn’t be retained. Coaches have one-year contracts and it wasn’t being renewed for next year. This was my notice.”

“Superintendent McDonald is the one that presented me with the paper and I asked her,

“Is there a reason?” She said “Not really, other than that we feel we should go in another direction.”

Clevenger was asked if losing a $6,000 stipend for weightlifting and having an assistant coach taken away from the program had anything to do with it.

“It probably had something to do with it,” he said. “I questioned them about that when it happened. I also questioned them when they took the youth football program out from under the umbrella and basically kicked it under the curb. I’m not good about just taking something and just saying OK. I’m going to fight for our kids and program. I don’t know what caused all of this. You’ll have to ask them that.”

Social media posts have been abuzz since it was reported that Clevenger would no longer be the coach at Danville. Parents, coaches and players all spoke out about the move.

There is even a petition asking for his reinstatement.

“For every Facebook post that I have seen, I’ve probably got twice as many text messages and testimonies,” Clevenger said. “I’m getting them from Henderson (where he held his first head coaching job) and that’s what makes this very rewarding. That’s been the biggest win for me out of this whole situation. Obviously, Friday was a gut punch, but seeing the reaction on social media, especially from my former players, means the world to me.”

He said coaching to him wasn’t entirely about winning games.

“As a high school coach, my goal has always been to touch lives,” he said. “Being able to win championships was great, but the whole goal of this is to use the game of football to better young men and to teach them valuable life lessons. Give them a chance to move on and better their career. I think after this year we have had about 35 that have had that opportunity. We have a lot more out there that are policemen, firemen, and players that have turned into great husbands and Dads. I felt like we were producing a quality kid.”

Running a quality little league program and watching kids grow was something he and former assistant coach Dukie Turner took a lot of pride in.

“Obviously, you want as many kids out playing that you can get,” he added. “Stuart Critchfield ran the program for years for Coach (Sam) Harp and did a phenomenal job.

He left and it was kicked to the curb by Superintendent McDonald in 2019 when she said we didn’t have proper this or proper that. That’s when I went out personally and started our own 501C3 which is a non-profit for Danville Youth Sports. I decided to include volleyball, track, wrestling, and cheerleading in order to let other kids participate. My thought process was that if it wasn’t offered by the recreation department as a youth rec league in town, we would offer it.”

Clevenger was fortunate to have coached the 2017 Kentucky Mr. Football, Dmauriae Van Cleeve.

“To see a kid from Danville – that’s the best thing about that 2017 team – they were all Danville kids – win Mr. Football was outstanding. No one moved in. They had Danville blood in them. You don’t find that a whole lot anymore. To see one of them get the ultimate prize of Mr. Football was awesome.”

While Clevenger said he is not worried about finding a job, he does care about his assistant coaches.

“They are the casualties in some of this stuff,” he said. “I’ve got coaches with young families that are probably not sure about what they are going to do. If another coach comes in, will they keep them around? There is a ripple effect. I’ve had great assistants and I hate to see anything happen to them.”

What’s next for Clevenger?

“You know I don’t know,” Clevenger said. “I’ve had some people reach out with some opportunities. I could go out and be a head coach tomorrow if I would go for an interview. At the end of the day, our family is from Danville. We have really strong roots here. To pick things up and move away from that just to satisfy my needs would be selfish and would not be fair to them. It will be a family decision. I have to do what is best for my family.”

Members of the Danville Board of Education “had no clue” that the head football coach’s contract was not going to be renewed last Friday.

On Monday, board chair Steve Becker said, “We didn’t know this was going to happen.”

But they, along with other coaches, teachers and stakeholders in the district were sent an email explaining that coach Clay Clevenger’s head football coaching contract was not going to be renewed at the end of June, he explained.

Becker said the only hiring and firing responsibility the board has is for the positions of school superintendent and school district attorney.

However, state law dictates that school boards, “truly have no say in any personnel hiring or firing.” Becker explained. “And the superintendent has no obligation to say, ‘This is what I’m going to do.’”

When asked why Clevenger’s contract was not renewed, Superintendent Dr. Tammy McDonald stated in an email, “I am unable to comment on personnel issues.”

According to the Kentucky School Boards Association website, “School board members have a very limited role in personnel matters. … School boards are prohibited from influencing who is hired, transferred, non-renewed, etc. An attempt by a board member to influence the hiring of any school employee can lead to disqualification from the school board…. They also should not limit or attempt to limit the superintendent’s discretion in personnel matters.”

The website states, “A superintendent is responsible for all personnel acts within the district. This includes the hiring, promotions, transfers, assignments, reinstatements, suspensions and dismissals of district employees.”

Clevenger is a special education teacher who is Kentucky certified tenured. His teaching job “is not, and was never in jeopardy,” Becker said. But every extra-curricular coaching position, whether it’s for athletics, drama, or forensics, is a year-to-year contract. There is no guarantee that anyone will be rehired from year to year.

Becker said Clevenger’s football contract will end June 30. Until then, his salary and coaching stipend will continue.

Announcing McDonald’s decision this early will “give him time to make decisions and gives the high school time to rehire a coach,” Becker said.

He added, “Coaching is always tied to teaching positions 99% of the time.”

Becker said, “We do not have the freedom to say to the public, ‘This is not true,’” in response to some of the comments being made about the firing.

“We do not have that luxury.”

Becker added, “We have nothing to do with this. It’s a horrible situation.”