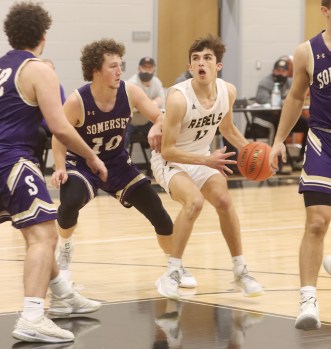 William Carr of Boyle County looks to the basket as Somerset’s Dylan Burton guards him during the first quarter Saturday. - Photo by Mike Marsee 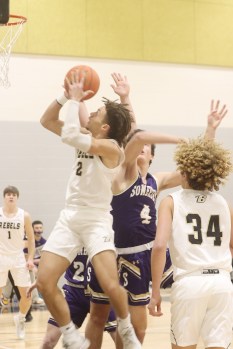 Luke Imfeld of Boyle County gets past Somerset’s Gavin Stevens for a shot during the first quarter Saturday. - Photo by Mike Marsee 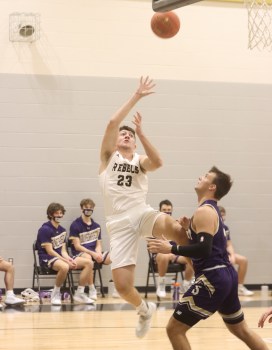 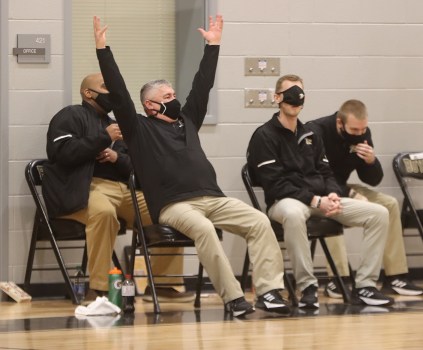 It was a short trip from “fat and sassy” to flat and humble.

Boyle County had, according to its acting head coach, gotten a bit too comfortable after a 6-0 start that left it as the last undefeated boys team in the 12th Region.

But the Rebels came back down to earth Saturday in a game that left a blemish on their record but also left them with a learning opportunity.

Even before halftime of their game against Somerset, they learned the importance of answering the bell, especially against good teams, as they fell behind by 15 points in the second quarter and spent most of the rest of the game trying to overtake the Briar Jumpers.

Boyle caught but could not pass Somerset in the closing minutes, falling 72-68 for their first loss of the season.

“We started out 6-0, and we got a little fat and sassy,” acting head coach Darryl Adams said. “This’ll be a good game for us to learn from.”

The first thing the Rebels should learn, Adams said, is what can happen when they aren’t fully focused. He said they were flat fat the start of Saturday’s game, and they paid a price.

“We have stressed all this week that we have got to be focused,” he said. “We can’t come out here and be lackadaisical and just think things are going to go in, and I think we did that tonight to start the game.”

Boyle (6-1) split two games against 12th Region contenders last week that was part of a particularly difficult stretch of their schedule, beating West Jessamine before losing to Somerset (9-2).

Adams said the Rebels are better for the experience, but not as good as he thinks they will be.

“I think we’re getting there, but we’re nowhere near where we’re going to be at the end,” he said.

The Rebels may also be better for having dealt with some difficult circumstances last week, from adjusting to the absence of their coach and one of their top players to practicing and playing in unfamiliar surroundings.

Boyle is facing the same issues that other teams have faced in this season affected by the COVID-19 pandemic, but the Rebels also have had some issues unique to their team.
Coach Dennie Webb and junior Hagan Webb have missed the past four games while in quarantine or isolation. They are expected to return for Monday’s game at Lincoln County.

And conflicts caused by reconstructed schedules for this and other Boyle athletic teams forced them out of their gym for Saturday’s game, which was played at the new Boyle County Middle School in a gymnasium in which none of them had shot prior to a shootaround that morning.

Boyle’s second-half rally was powered primarily by two things:
• The offense of Luke Imfeld, who scored 30 of his career-high 37 points in the second half. Imfeld, who had 20 points in the fourth quarter, finished 4 for 8 from 3-point range and 12 for 24 overall from the field.

• Better defense that stopped Somerset’s 3-point barrage and forced the Jumpers to shoot 10 percentage points lower from the field in the second half, when they shot 38 percent, than in the first. Kannon Tucker was 4 for 5 and Somerset was 6 for 13 from long range in the first half, when shooters were often open, but the Jumpers were just 2 for 7 in the second, when they were challenged on the perimeter.

The Rebels missed two chances to take the lead, then saw Somerset go up by three.

Trailing 71-68, they got one final chance to tie the game when a 3-point shot missed the mark with nine seconds left.

Carr scored 11 points for Boyle but was the only Rebel other than Imfeld in double figures. Adams said the team typically has had three or four double-figure scorers per game.

Luke Sheperson had 11 rebounds for the Rebels.

Kade Grundy scored 27 points for Somerset, and Tucker finished with 16.

“They fought, (and) we got down and guarded people for a while,” Adams said.

The game began a stretch of three games in four days for Boyle, which follows its game

Monday at Lincoln with another Tuesday at Southwestern, then hosts Pulaski County on Saturday.

“We’ve got our hands full,” Adams said, “but that’s what the season is about, preparing you for the postseason.”

District doubleheaders: The boys and girls teams at Boyle County and Danville return to 45th District play this week in a series of doubleheaders.