Personal Effects: Is there a market for Steuben crystal?

Question: Hey Jerry, how’s the market for Steuben crystal going now? My brothers and I have all of Mom and Dad’s now. Thankfully it’s mostly bar ware and we can all use that. 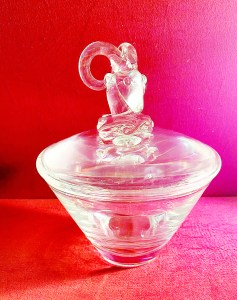 I know years ago it was so expensive. A favorite piece is this deer candy dish. We have the paperwork and the original box and little bags too.

What would it sell for today at the Steuben store? Are they still open? Thanks for your time in looking at this.

The Carder period (1903 – 1932) was known for its amazing colors, designs and decorations. Steuben is still in business, though they no longer have the Manhattan flagship store, but operate strongly online and through a series of exclusive brick and mortar establishments, mainly the Corning Glass Museum.

Steuben was named after its home place, Steuben, New York, where it’s headquartered.

This is the second official period of Steuben. This was the world of Houghton, when color was pushed out in favor of, stunningly clear, prismatic crystal.

This ram’s head candy dish was featured in its catalogs for decades but, as far as I could find, it was discontinued in the late 1990s.

Originally, it would have retailed for $450. I found one candy dish online, at a replacement store, priced at $299.

However, I found more than one example at some online auction sites, selling for under $100. Having the original box, papers and dust bags only add to the appeal. Realistically, I think yours might be priced in a store for about $150.

Its a great piece. Enjoy it everyday. Thanks for a great question.