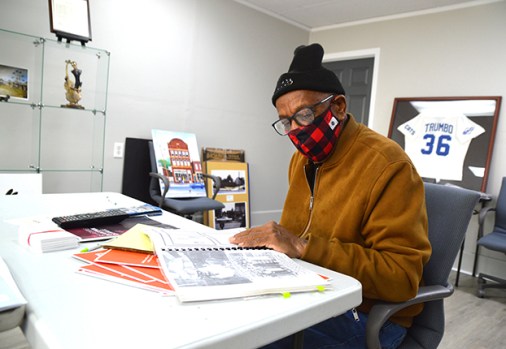 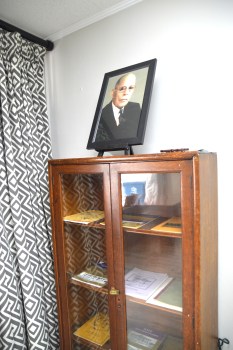 Hughes said this piece of furniture is from Bate High School, which was for Black children prior to integration. He said John W. Bate (pictured above) started the school in 1912. “This is one of the only pieces of furniture that was kept,” Hughes said. The building lasted into the ‘70s after integration and then was torn down since students transferred mainly to Danville High School. A teacher salvaged this piece of furniture because she “thought that was a travesty” that not only furniture but also trophies and other meaningful items were thrown away, Hughes said. The woman kept it for about 30 to 40 years before giving it to Hughes. DBCAAHS has had the piece for about four or five years. - Photo by Olivia Mohr 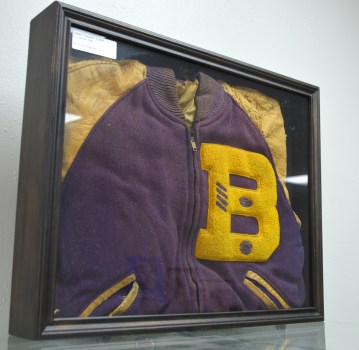 This jacket is from Bate High School graduate James “Jackie” Lewis, who graduated in 1960. Hughes said he would like to restore the jacket at some point. - Photo by Olivia Mohr 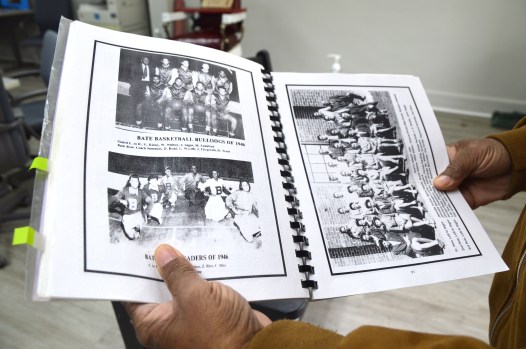 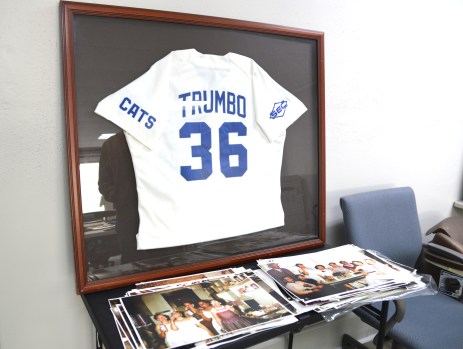 Pictured above is a jersey that belonged to a Danville High School student named Troy Trumbo. Hughes said Trumbo was a basketball and football “star” at the high school who went on to play baseball at the University of Kentucky, but then he died at a young age, around his early ‘20s. “His parents wanted us to have that to display,” Hughes said about the jersey. - Photo by Olivia Mohr 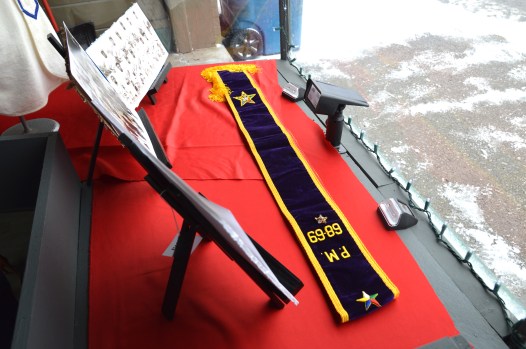 This banner is in the display window at the DBCAAHS building. Hughes said it was from a Black women’s social organization called the Order of the Eastern Star. Hughes said the society received the banner from a woman who was involved in the organization. - Photo by Olivia Mohr 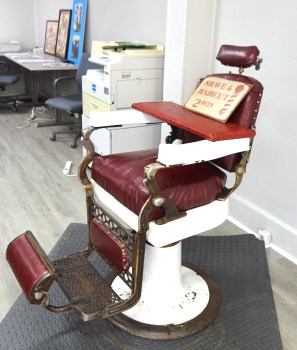 This barber shop chair is probably about 90 years old,, Hughes said. It’s from the barber shop that was next door to the pool room that was on Second Street in what used to be Danville’s Black business district. The woman who gave it to DBCAAHS got it around 1930, Hughes said. - Photo by Olivia Mohr 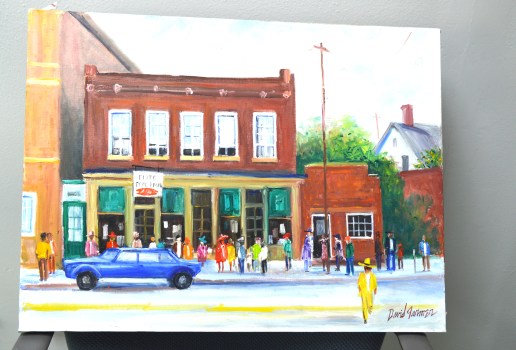 Hughes said there are a few of David Farmer’s paintings in the DBCAAHS building. This one features the Elite Pool Room, which was on South Second Street, Hughes said. - Photo by Olivia Mohr 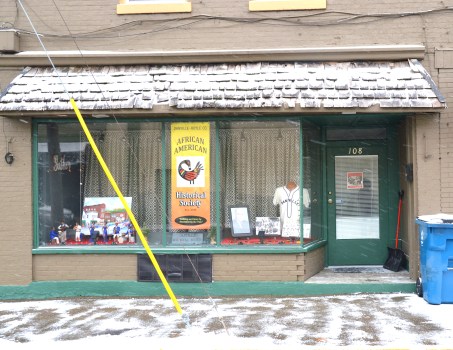 Snow flurries past Danville-Boyle County African American Historical Society building, located in the old Henson Hotel, at 108 North Second St. on Feb. 1. President Michael Hughes said he hopes the building will be open to the public once the society feels it is safe, considering the pandemic. - Photo by Olivia Mohr

Located at 108 N. Second Street, which is the site of the old Henson Hotel, the Danville-Boyle County African American Historical Society’s building is coming together. Copies of photos president Michael Hughes has collected from Black people in the community are on display, and Hughes wants to put them on the walls. Pieces of historical furniture and other items are also on display in the building. The building is still in progress, he said, and the photos and items come from members of the community.

Many of the old photos, strongly featuring what used to be Danville’s African American business district, are black and white, so Hughes likes to colorize them.

The business district was a heart of the African American community, especially prior to integration, Hughes said. In interviews he has from 1991, almost all of the people he interviewed mention Second Street because it was central to the Black community. Restaurants, businesses and social clubs for Black people gave them a place to feel safe and together, especially on weekends. However, in the early ‘70s urban renewal bought up the land, cleared it and sold it to the state. The area is where Constitution Square now stands — it was turned into a park.

Especially since many young people don’t know what the business district was like, photos and recorded oral interviews with Black people who remember the community back then are important, Hughes said. The building will serve as a hub of history.

“He did just an amazing job,” Hughes said.

Hughes said DBCAAHS, which is a nonprofit organization, has spent a considerable amount of money on the building and other efforts and always welcomes donations so it can pay for things like utilities for the building and raise money for events like future Soul of Second Street festivals. Hughes said once the DBCAAHS feels comfortable enough considering the pandemic to open the building to the public, it will be able to host tours and other events, and people will be able to come in and learn about the history. Hughes also said the organization has a bench they will put outside when the weather is better so people will be able to sit outside and talk about history as well.

To donate to the DBCAAHS, checks can be sent to Michael Hughes or Betty White made payable to the Danville-Boyle County African American Historical Society and addressed to P.O. Box 597, Danville, KY 40422.