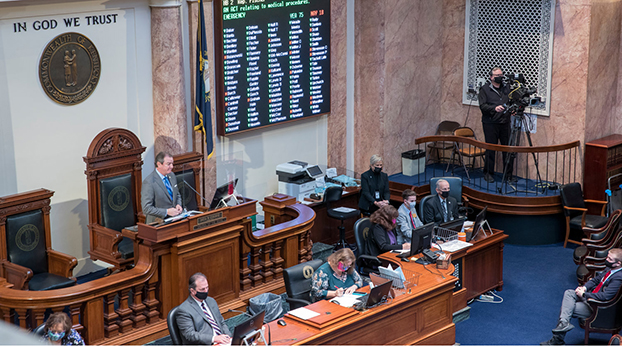 The General Assembly return to session Tuesday and voted to override Gov. Andy Beshear's vetoes on six bills. The governor filed suit against three of the bills. (Kentucky Today/Brandon Porter)

Lawmakers returned from their recess on Tuesday with the main action being an override of all six vetoes by Gov. Andy Beshear, which in turn prompted a lawsuit against three of the bills.

Of the seven bills passed by lawmakers during the first part of the 2021 session, the governor vetoed six, and allowed the seventh to become law without his signature.

Utilizing their super majority powers, they used the opening day of the second part of the short session to override the governor’s actions.

–Senate Bill 1 limits a governor’s emergency executive orders to 30 days, unless an extension is approved by the General Assembly, meaning he would have to call them into a special session, for any emergency lasting longer than 30 days.

–House Bill 1 allows any business, for-profit or not-for-profit organization, local government, association, or any school or school district, public, private, or religiously affiliated, to remain open and fully operational for in-person services so long as it adopts an operating plan that meets or exceeds all applicable guidance issued by the Centers for Disease Control and Prevention or by the executive branch, whichever is least restrictive. This bill is only in effect until the end of the year.

–HB 2 allows the attorney general to proactively take legal action against abortion providers who violate state law, instead of having to wait for the Cabinet for Health and Family Services to ask them for help.

–HB 3 eliminates the requirement that civil lawsuits against the state be heard in Franklin Circuit Court.

While Congress requires a 2/3 vote to override the veto of a President, the General Assembly only needed a simple majority in both chambers to override a Gubernatorial veto. Since the Republicans hold a supermajority in both the House and Senate, they had no problem mustering the needed votes.

Because each of the six bills contained an emergency clause, they become effective as soon as they are filed with the Secretary of State’s office.

Gov. Beshear quickly filed a lawsuit at Franklin Circuit Court as soon as the votes were recorded, asking that three of the bills be thrown out as unconstitutional, and that temporary and permanent injunctive relief be grated, to halt enforcement of the new laws.

The suit says SB 2 is unconstitutional, “By invading the executive power and function of the Cabinet for Health and Family Services – an executive branch Cabinet – to act to protect Kentuckians from infectious or contagious diseases by limiting any administrative regulation issued under KRS Chapter 214 from being in effect longer than 30 days if it places restrictions on the in-person meeting or functioning certain entities.”

In a statement, the governor said, “Today, the General Assembly attempted to surrender to COVID-19 and accept the casualties. As your governor, I cannot let this happen. I have filed this action to continue to fight for the protection of all Kentuckians.”