Pause turned out to be a plus for Wildcats; UK faces Missouri tonight at 7 p.m. 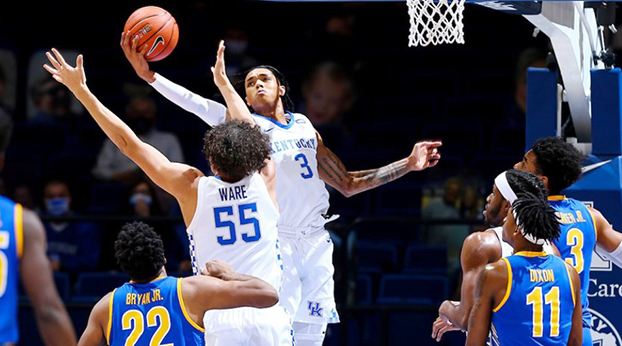 An unexpected interruption gave Kentucky a chance to take a deep breath, reboot, and refocus on the rest of the season.

“We all took the time off and kind of used it as a refresh and, you know, got our minds right,” Kentucky freshman Lance Ware said. “It gave us some time even though we were still working out. It wasn’t practice. It wasn’t a two-hour-long practice. We kind of like got to decompress and just kind of refocus on the main goal and what we need to do to play and obviously win games.”

The Wildcats (5-10, 4-4 Southeastern Conference) will resume the season Wednesday following a 48-hour pause last weekend because of COVID-19 protocols. Because of the shutdown, a showdown against No. 6 Texas in the Big 12-SEC Challenge was canceled last weekend. The Missouri contest was moved from Tuesday to Wednesday, giving Kentucky extra time to prepare for the matchup.

The Wildcats didn’t practice three of the previous four days and returned to the court Monday. Kentucky coach John Calipari expects the roster to be mostly intact Wednesday night in Columbia.

Upon his team’s return to practice, Calipari is still trying to get his squad to understand the importance of not passing up a good shot and added that he stopped practice “at least 10 times” to ask his players why they didn’t shoot the ball when given an opportunity.

“(By) passing up a good shot, (it) leads to a turnover or a worse shot that we can’t rebound,” he said. “We’re working on that. How can we try to create some better opportunities, some earlier opportunities? We’re trying to figure out that.”

Although the Wildcats have yet to hit their stride, Calipari said they are “not that far away.”

“We’re just not,” he said. “It’s not my perception that’s reality — it’ll be their perception. Which is why I said, ‘Let’s restart. Let’s reboot. Forget all this. Let’s start anew. Let’s be energized in what we do and let’s go from here.’ We’ve got nine games left. We got nine games left. Let’s go. I’m watching this team move to here, this team moves to — we’re not that far off. But it’s what I believe. And I keep telling them, it’s what they believe.”

Like his coach, Ware believes a breakthrough is closer to becoming a reality and said the Wildcats need to just “keep on getting better.”

“That’s the same thing we said at the beginning of the season,” Ware said. “I mean your goal should never change whether you win or you lose. They’re goals for a reason, so if you just keep on changing them, it’s never a goal. The same goals that we had set on day one are the same goals that we’re still looking forward to having now.”

Calipari’s squad hasn’t played since a 70-59 loss at No. 10 Alabama on Jan. 26 in Tuscaloosa. Overall, Kentucky is 13-1 against the Tigers and own a 4-1 record in games played in Columbia. The Wildcats have won three in a row in the series between the two conference rivals.

The Tigers (11-3, 4-3) dropped six spots in the latest Associated Press Top-25 poll from 12th to No. 18 in the rankings released Monday. Missouri has won four of its past five games, including a 102-98 win over Texas Christian in the Big 12-SEC Challenge last weekend.

Calipari said the Wildcats are eager to get back on the court and his team was disappointed when last weekend’s contest against the Longhorns was canceled.

“These kids want to play, and they want to play good teams,” he said. “I just want us to play better in winning time, last four minutes. We’ve just got to play better then, and that means playing to win, playing to be the dagger, playing to make the rebound or the play or the stop or the block that ends the game. Not, ‘Ugh, we may not win.’ You can’t play not to lose. Play to win.’”