Art of Being Black exhibit: A look at the art and themes 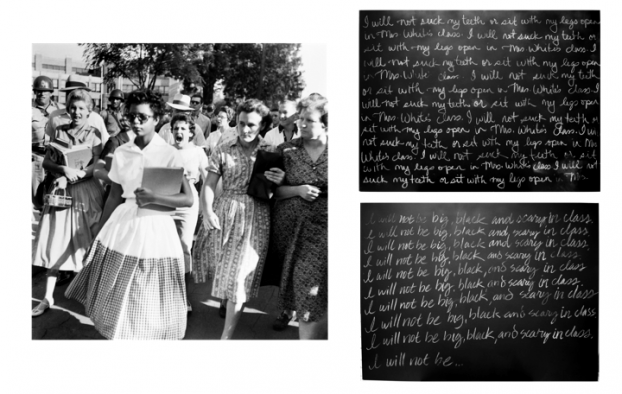 Frank X Walker’s “Policing Black Bodies #1 and #2” features two chalkboards next to a 1957 photograph of Elizabeth Eckford during integration of Little Rock schools. The first chalkboards reads “I will not suck my teeth or sit with my legs open in Mrs. White’s class” over and over, and the second reads “I will not be big, black and scary in class” over and over. - Photo from Art Center website, used with Walker’s permission

“The Art of Being Black: Conversation and Experience” is the Art Center of the Bluegrass’ winter show. The show will run until April 17 in the grand hall and upstairs galleries. There’s also a virtual version of the exhibit, complete with photos of the art pieces, artist testimonials and recorded accounts of the pieces, on the Art Center’s website. The exhibit focuses on the Black experience from different perspectives, tying in voices from the community.

Andrea Abrams is the chair of the exhibit advisory committee and also associate vice president for diversity affairs at Centre College.

“Particularly important to the project was making sure that we heard from a diverse cross-section of Black Danville,” she said in an email. “Older residents, younger residents, those who grew up in Danville but had moved away, and those who had just moved to Danville in the past few years were invited to participate.”

She said the conversations focused on “the Black Lives Matter movement, the 2020 election and the ongoing quest for racial and social justice,” as well as “Black neighborhoods, Second Street, churches, restaurants and social clubs.”

“Older community members spoke about Danville during segregation and recalled both painful and cherished experiences,” Abrams said. “They reminisced about Black schools as spaces where Black excellence was nurtured and celebrated. Both younger and older community members remembered the teachers, preachers and neighbors who were active members of the Black community and of Danville as a whole. Each conversation considered what the Black community had contributed to Danville and the ways that they would like to see Danville grow in the future. Educational programs and green spaces dedicated to developing the potential of Danville’s Black children is a hope of many of those who participated.”

The artists translated the ideas the community shared and what resonated with them into art, she said.

Associate director for the Art Center Kate Snyder said the advisory committee established goals for the exhibit that were largely related to community response, including exposing visitors to art that reflects “a different lived experience from their own,” prompting visitors to reflect on those experiences and for them to respond and engage. Whether visitors are viewing the exhibit in person or virtually, the exhibit offers active involvement in conversation — like the hands-on quilt collage project, a community response chalkboard and a series of response questions, Snyder said, and “that community response then becomes part of the show and deepens the experience of future visitors.”

Executive director for the Art Center Niki Kinkade said with the pandemic in mind, the Art Center knew the exhibit would need to be offered both in person and online, and both mediums are beneficial in different ways.

“The impact of the artwork is strong,” she said in an email. “The pieces in the show are large and powerful. Standing next to them is something I hope our audience is able to do. Having the online gallery and the various links to conversations and artist statements, etc., broadens our audience to include people from all around Kentucky and all around the country.”

The exhibit examines what it means to be Black in Danville, Abrams said. In discussions surrounding the exhibit, “community members discussed the Black Lives Matter movement, the 2020 election, and the ongoing quest for racial and social justice,” she said.

“Many recognized a direct connection between economic empowerment and the ability to develop and sustain positive social change,” Abrams said.  “Recalling the pride and success of Second Street, they would like to see Danville invest in Black entrepreneurship.”

The exhibit is made up of three different exhibits: “Conversations,” which focuses on community stories, “Momentum,” which responds to the “ongoing struggle for racial justice” in art inspired by civil rights photos, and “Call and Response,” which invited artwork from the community, Snyder said.

In “Conversations,” art by Ashley Cathey, Sandra Charles and LaVon Williams is featured. According to an artist statement on the Art Center’s website, Cathey’s work focuses largely on what it means to be Black in white spaces, which she says in her statement “forces you to sometimes stick out … like a red dot or maybe even like a fly in milk.”

Charles’ work reflects similarities between the younger and older generations who participated in community conversation. The subjects in her paintings are Black women, one old and one young, with African-inspired quilts. Each holds a book, and whether they have it open or closed has symbolic meaning.

“Momentum” features art by Tomisha Lovely-Allen and Frank X Walker. Lovely-Allen’s work is shown side-by-side with the protest photos her work was inspired by, one from 1968 and one from 2020. Her artist statements reflect how she used background and foreground in her paintings to show an ongoing struggle through the ages. Walker’s pieces are largely inspired by how Black bodies are policed in education and exploited in athletics.

The artists from the first two exhibits also have some work featured in “Call and Response,” along with many other pieces from the community.

In an email interview with Walker, he said he has a total of eight works in two different exhibits. In “Momentum” are “Policing Black Bodies #1 & # 2” “in response to a 1957 photograph of Elizabeth Eckford during the integration of Little Rock schools,” “Get the Ball to Harriet,” and “The New Field Hands” and “African American History 101,” which are “in response to a 1968 photograph of Tommie Smith and John Carlos taken at the summer Olympics in Mexico City,” he said. He has pieces called “Black Star Seeds,” “Not So Cheap Side” and “What I Want to Remember” in the “Call and Response” exhibit. He also recorded video talks for the exhibit. Walker is a Danville native.

“I think my work shows how being Black in Danville is connected to being Black everywhere else in the South,” he said. “And attempts to convey important issues that deal with the policing of Black bodies in classroom settings, exploiting Black athletes, and the importance of being connected to our history.”

It’s his first time exhibiting in Danville since 1976, when he painted fire hydrants in his neighborhood red, white and blue in honor of the bicentennial and the annual Christmas theme he painted on the windows of Baskin-Robbins.

“I’ve been excited about participating and nervous since most people only know about my poetry,” he said. “I was invited to participate.”

He said since he’s a multidisciplinary artist, he recognizes sometimes there are no words that can express an idea, so words and images are best to convey it. And representation is important, he said, so his subjects in “Black Star Seeds” show how important it is to see “our reflections everywhere,” even in spaces where Black people have “been largely absent.”

“I also love history, so much of my work tries to teach the viewer a lesson about something they may have missed in school,” he said.

Later, he said, “My work that is considered controversial deals with themes that generally are difficult to talk about. Most people come to galleries not expecting to be confronted with images of enslavement, oppression, or systemic racism. Some refuse to acknowledge that such things ever existed in our country or even in Danville or that it’s not important. I like to challenge those ideals.”

Learn more about the exhibit here.