Cats falter down the stretch again, lose at No. 18 Missouri 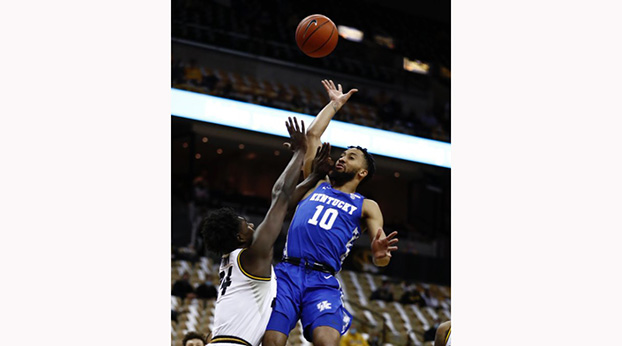 Davion Mintz goes up for a shot in a 75-70 loss at Missouri Wednesday night in Columbia. - SEC Photo

Kentucky has struggled down the stretch in close games this season. The trend continued in a 75-70 loss to No. 18 Missouri Wednesday night in Columbia.

The Wildcats (5-11, 4-5 Southeastern Conference) suffered their fifth loss in the past six games and face an uphill climb to make the NCAA Tournament going into the final month of the regular season.

Kentucky trailed by three with under five minutes remaining, but collapsed at crunch time as the Tigers pulled away to earn just their second win in 15 tries against the Wildcats.

Kentucky was playing its first game in more than a week following a 48-hour pause because of COVID-19 protocol last weekend. The shutdown led to the cancelation of last weekend’s showdown against No. 6 Texas in the Big-12-SEC Challenge. The contest against the Tigers, originally scheduled for Tuesday, was moved to Wednesday night.

The signs of a lack of practice time showed for the Wildcats, especially in the first half as Missouri knocked down seven 3-pointers and led 40-27 at the half.
Despite the double-digit deficit, the Wildcats roared back and outscored the hosts 15-3 to open the second half and remained within striking distance until the closing minutes.

A consistent issue throughout the season, turnovers, again plagued Kentucky when it mattered the most. Kentucky had four miscues in the final four minutes and totaled 17 for the contest. Missouri tallied 19 points off those turnovers, which proved to be a decisive a difference-maker.

“It’s not like we didn’t play in the last four minutes,” Calipari said. “We knew that we were playing. We defended. We just — again turned it over, 17 turnovers. You’re not going to win a game like this. “

The performance by Mintz was overshadowed by Missouri guard Dru Smith who led all scorers with 26 points.

Kentucky shot a blistering 59 percent in the second half as Calipari went with his most potent lineup as one of his top 3-point shooting threats, Dontaie Allen, watched from the bench.

Staying behind
Kentucky’s Jacob Toppin missed the contest because of a non-COVID illness and Kentucky assistant coach Joel Justus and freshman Terrence Clarke also weren’t with the Wildcats in Columbia.

Calipari is hopeful Clarke can play this weekend against Tennessee.

“He needs to get ready to try to play that game Saturday,” Calipari said. “If he can practice without limping Thursday and Friday, then he will play Saturday … Let’s see where this thing goes.”