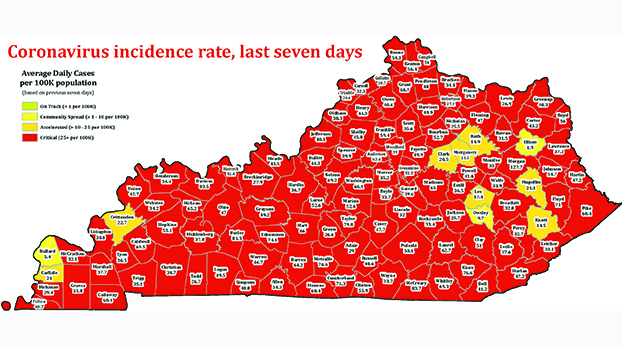 By Melissa Patrick
Kentucky Health News
As most of the metrics used to measure the coronavirus continued on a positive trend in the state, Kentuckians were encouraged to minimize their social contacts this Super Bowl weekend in order to thwart the virus.

“This is just like any other holiday or social event,” Health Commissioner Steven Stack said at a news briefing. “We can’t afford to have the disease spread now. With these mutations and these variants, every time we allow it to infect more people, it gives the virus the opportunity to mutate, it gives the virus the opportunity to learn how to defeat the antibodies that our bodies are forming based on the vaccines or the natural infection.”

Stack said the safest way to watch the Super Bowl is at home with immediate family, but if you do choose to gather, it is important to follow the state’s guidance that calls for only gathering with two families for a maximum of eight people, to practice social distancing, and to wear a mask at all times because “when people get together in private residences in close proximity, that is one of the single most effective ways to spread the disease.”

Beshear announced 2,592 new cases of the coronavirus Wednesday, 100 more than last Wednesday, but less than two weeks ago. The seven-day rolling average of new cases rose by 24, to 2,376 per day.

The share of people testing positive for the virus in the last seven days was 8.53%, down 0.3 points from yesterday. “That shows you that this is real,” Beshear said of the decline in new cases. “It’s not just a result of how many tests there are. We’re seeing a decrease in the virus.”

The metric that remains high is deaths, partly the result of the escalation of cases seen in November and during the holidays. Beshear announced 51 deaths from Covid-19, seven of them 60 and under. That brings the state’s death toll to 3,863. Beshear noted that January was the worst month for Covid-19 deaths, and warned that “February is going to be tough, too.”

Despite the high number of deaths in Kentucky the last few weeks, Beshear said, the state is among the 10 lowest when it comes to Covid-19 deaths according to population.

“Let’s not fumble at this late stage,” he said. “Let’s make sure we continue to do what it takes to protect our people through the end of this virus to the point that we defeat it.”

Masks: Asked if people need to be wearing two masks to ward off more contagious strains of the virus, Stack said theoretically two masks may be better, because it would increase the filtration in front of your mouth and nose.

However, he said if you follow the current recommendation to wear a three-layer cloth mask, you are already sort of doing that. And while masking is important, he said, “The most important thing you can do is stay six or eight feet away from everybody. And that, plus a single cloth mask with multiple layers — you’re probably pretty good.”

“I’m not going to tell you that two is not better than one, but one [mask] plus more than six feet of distance is probably still pretty good — and what we need everybody to do all the time,” he said.

Dr. Anthony Fauci, the nation’s top infectious disease expert, said in a White House Coronavirus Task Force briefing that there is nothing wrong with wearing two masks. “I myself often wear two masks,” he said, although he couldn’t yet make that recommendation based on science.

Vaccines: The state’s vaccine report shows 385,695 Kentuckians, or 8.63% of the state’s population, have received at least one dose of vaccine. Today, the state changed how it reports vaccine data, reporting only first doses allocated.

Moderna vaccine will get the second.

Stack reiterated that demand is greater than the supply, and the state only gets about 68,000 doses a week.

“It’s going to take a while to reach everyone who wants to be immunized,” he said.

He said when one region opened its phone lines for the first time to schedule appointments, for 700 vaccination slots, it received 110,000 phone calls in the first two and a half hours.

“So please know, they are vaccinating,” he said. “They’re using everything they’re getting as quickly as they can. It’s a matter of needing more vaccine to fulfill the demand right now, which is very large.”

Beshear said the state is working on a program to allow Kentuckians to sign up for a vaccine several weeks in advance, in hope of alleviating some of the anxiety people have when they try to make appointments, only to find out all of the slots have been taken for that given week.

In the state Senate, Sen. Robbie Mills, R-Henderson, spoke to the frustration of his senior constituents, saying there are “zero vaccines available” in a three-county area and there is a perception that Indiana is doing better than Kentucky in its vaccine rollout. Mills said he has talked to Transportation Secretary Jim Gray, the vaccine coordinator, and that knows “they are trying,” but it would be helpful if they knew more to be able to better inform their constituents.

Asked about the perception that other states are doing better, Beshear said Kentucky is a top 10 state for vaccinations, and is ahead of Indiana. He said many doses have been provided to Mills’s district, and vaccines have been distributed equitably across the state. He said there is simply not enough supply to vaccinated everyone who wants one: “We’re getting it out as fast as we can.”

Beshear said local health departments will be provided a consistent supply of vaccine for the next three weeks. He said the national 5% increase in vaccine shipments amounts to about 2,000 more doses for Kentucky.

The governor said he will have more information tomorrow on which local pharmacies will be getting vaccines from President Biden’s Federal Retail Pharmacy Program.

Schools: Beshear said Kentucky is still on track to be the first state to vaccinate all of its teachers who want one, increasing opportunities for more in-person schooling. But he cautioned, “One size can’t fit all the different districts” because they all face different challenges.

Further, he said the Centers for Disease Control and Prevention told governors in a call that to open safely, schools will need to provide for density control, universal masking, proper ventilation and community mitigation.

He said his team is working with the state Department of Education to provide clear guidance and instruction for how schools can open in some fashion by March 1. He added that the plans will require a virtual option for families who are not comfortable sending their children to in-person classes.

This week, the K-12 school dashboard shows 586 new students and 229 new staff have tested positive for the vaccine and 2,101 students and 327 staff are quarantined.