Kentucky School for the Deaf: Looking back, 1921 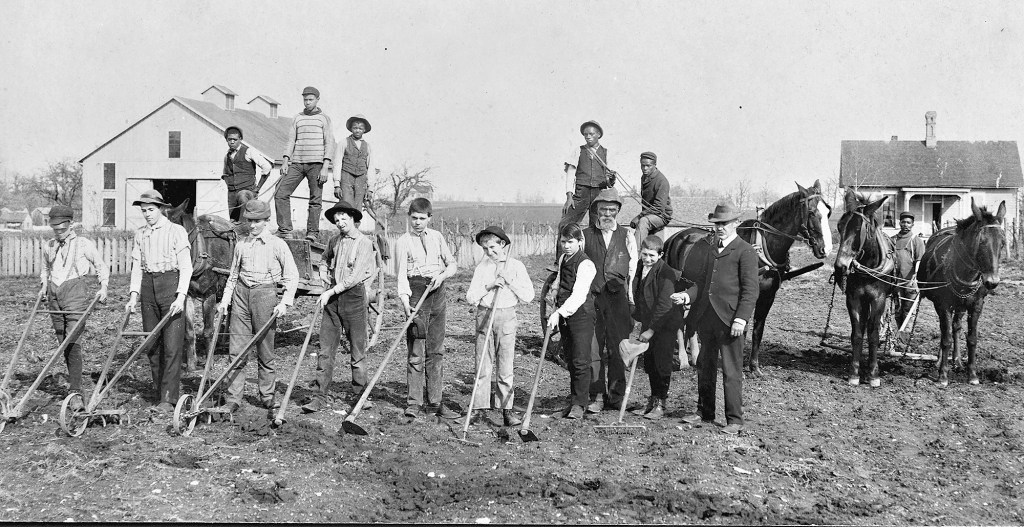 William “Uncle Will” Tompkins was employed by KSD for 57 years, beginning in 1868, He worked as a farmhand and “yard boy” . He also repaired and painted buildings, inside and out. The photo shows him with a group of teen-age vocational students and other farmhands as they prepare to do some cultivating. It is dated 1902. Tompkins was about 66 years old. (Photo courtesy of KSD Jacobs Hall)

On Jan. 6, The Standard editor, George McClure wrote, “In looking through the KENTUCKY DEAF-MUTE, of July 17th, 1873, we came across the following bit of local history that will interest the older residents of Danville and the old-time students of the school.”

In January: “The boys of the Y.M.C.A. gave an entertainment last Saturday, charging ten cents admission, the proceeds going, for the second year in a row, to “Uncle Will” Tompkins, our old colored servant who is bedfast, having lost the use of his lower limbs. The receipts were $21.69 which has been turned over to Uncle Will who is deeply grateful for this kindness from the pupils of the school he served for over fifty years. Uncle Will has a good wife, considerably younger than himself, who cares for him most kindly, but as she cannot leave him alone such help comes handy.”

Editor’s note: Records show that Tompkins died March 13, 1921. Tompkins is mentioned in the Kentucky Standard periodically and was definitely a well-loved and respected figure on campus.

Also, “Charles Henderson became a member of our Board in 1824 and served continuously until his death in 1862, a period of 38 years. He was also the school’s auditor from 1854 to 1862. In 1823 nineteen of the leading citizens of Danville subscribed $950.to the establishment of the school. There appear to have been some “Indian givers” in those days. Of this sum, $50 subscribed by Charles Henderson was the only one paid. The others were carried on the books for several years as uncollected assets and then quietly removed from subsequent reports.”

In the same issue, McClure announced that, “Preliminary work on Danville’s new asphalt streets was started Monday at the corner of Third and Green (now Martin Luther King Blvd.) streets, adjoining the school premises. A force of men is engaged in laying drainage pipe to connect with the storm sewer on Green street between Third and Fourth streets. Danville has been behind some of her neighbors in the matter of street construction, but when we get the new streets for which contracts have been let, we expect them to be just a little better than those of any other town in the State.”

Later, in the January 20 issue, the editor bemoaned the fact that “Third and Green streets at their intersection and for a block or so each way is about the “messiest” place in town just now. A large crew is engaged in laying pipes on both sides of the street, and both streets are closed to traffic and completely filled with great piles of excavated earth, tile, brick, etc. Our folks at KSD get lots of the mud as they come and go. As all this work is preliminary to the laying of asphalt streets, however, they do not mind the inconvenience.”

On the local economy, on January 20, McClure wrote, “The Danville tobacco warehouses opened for business Tuesday, the 4th inst. The first basket sold at twenty cents per pound, and the prices of the better grades averaged about that figure. The highest price paid was fifty-four cents a pound, and the lowest a half-a-cent a pound. Prices are about half what they were last year and in many places in Kentucky, the growers are refusing to accept the bids of the agents of the tobacco companies. The prosperity of this section depends largely on the prices obtained for tobacco. Many of our school patrons are growers, and large numbers of deaf farmers make it through the year on proceeds from tobacco sales.”