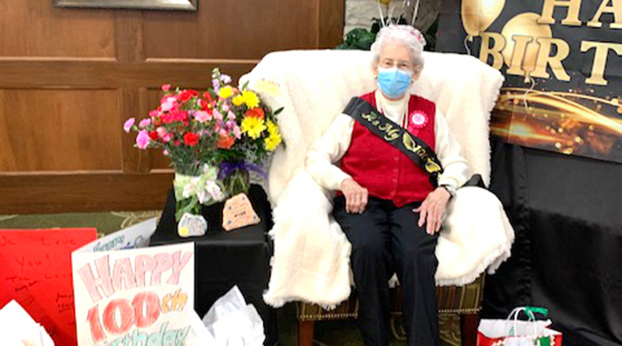 June Wiley celebrated her 100th birthday at Morning Pointe of Danville, where she is a resident, on Feb. 4. She got gifts, a bucket full of cards, flowers, balloons and a couple other surprises. - Photo submitted 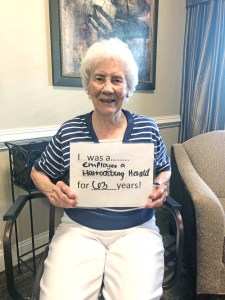 Pictured is June Wiley. This photo was taken pre-pandemic. Wiley was an employee at the Harrodsburg Herald for 63 years. – Photo submitted.

At Morning Pointe of Danville on Thursday, staff and family celebrated June Wiley’s 100th birthday with her.

Her niece and nephew she hadn’t seen since March because of pandemic visitation restrictions surprised her by getting permitted to visit and bring her a gift, staying six feet apart.

In the evening, her friends from Harrodsburg surprised her with a drive-by parade. She was also celebrated with treats, snacks, and cards. A 50-year-old aide at Morning Pointe had the same birthday as Wiley, so Morning Pointe celebrated her as well.

Wiley was born in Mercer County in 1921. Her parents raised her on their family farm, where she helped them can vegetables and sell blackberries.

“I’ve eaten good, fresh vegetables all my life, so I think that might be what contributed to my long life,” Wiley said with a laugh.

Wiley also is a woman of Christian faith, so she said trusting in God helped her live a long life as well.

Wiley lived with her parents even after she started working at The Harrodsburg Herald, where she helped proofread and mainly worked with ads. She raised enough money to buy a house herself and then her parents lived there with her until they died.

Nicole Walton, life enrichment director at Morning Pointe, reads the Harrodsburg Herald to Wiley frequently, since Wiley struggles with her eyesight and likes to keep up with the obituaries and what is going on in Harrodsburg. She said Wiley loves daily devotions at the facility and her exercises every morning. Wiley is very self-sufficient for her age, Walton said. She changes her own batteries in her hearing aides and asks for little help.

“She’s amazing, just absolutely amazing as to what she can do,” Walton said.

She said Wiley has an excellent memory — Wiley remembers the exact day she began working at the Harrodsburg Herald: March 11, 1943. She retired in 2006. She worked there full-time for 50 years, and 63 years total.

Her starting pay was $1 a day, and she saved up her money to buy her first car for $800, a two-door Chevrolet. She traded her cars several times.

Wiley was active in church at Mackville Christian Church and Magnolia Christian Church, and she and some women from a church group called Young at Heart got lunch together every month at different restaurants around Kentucky. She said still hears from her church friends.

Even though people can’t typically visit her right now, and haven’t for several months because of the pandemic, Wiley said she doesn’t feel lonely.

“There’s always something going on here,” she said about Morning Pointe.

Walton said Wiley “is very loved at Morning Pointe,” and added that for last Valentine’s Day, Wiley was voted the “queen of Morning Pointe.” She has a friend across the hall from her who reads to her, and the two women walk up the hall together for their meals.

Wiley has made other friends at the facility as well. She has lived at Morning Pointe since May 26, 2017.