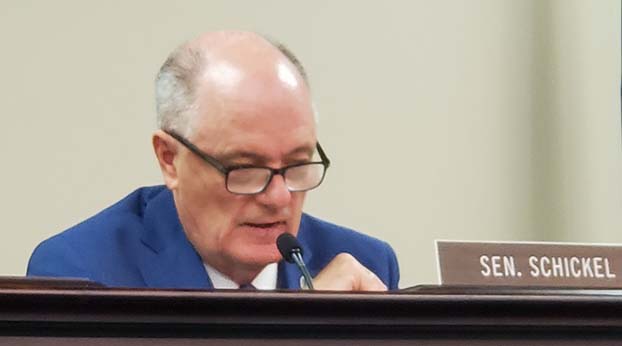 Sen. John Schickel said the measure to legalize historical horse racing is a vote for full-blown casinos in Kentucky. "I'm just one person, but I don't want that," he said. "I want the focus to be on our horse industry." - Photo by Tom Latek/Kentucky Today

A bill to legalize historical horse racing, which are essentially slot machines, in Kentucky cleared its first legislative hurdle on Thursday as it passed the Senate Licensing and Occupations Committee without dissent.

However, not everybody is happy about it. The Kentucky Baptist Convention and the Family Foundation are both opposed to the measure.

The measure looks to fix what led Kentucky’s Supreme Court to unanimously rule that at least some forms of the slots-like historical horse racing don’t meet pari-mutuel wagering standards under state law.

Senate Bill 120 is sponsored by Sen. John Schickel, R-Union, who chairs the Licensing and Occupations Committee, along with Senate President Robert Stivers, R-Manchester.

Tom Drury, a horse trainer, testified he relies on the smaller racetracks like Turfway and Ellis Park to make a living, and that the tracks need the historic horse racing to survive and be able to increase purses at the races so he can stay in business and keep people employed in Kentucky’s signature industry.

“Today, the purse in a maiden race, that’s for a horse that has never won a race, is $32,000 at Turfway Park,” he said. “You can go to Louisiana, Florida, Pennsylvania, New York, and several other states that run for a lot more money. At Oaklawn Park in Arkansas, that same race has an $82,000 pot.”

Schickel described why he supports the measure, which supporters testified merely maintains the status quo. “I don’t want full-blown casinos in Kentucky. I’m just one person, but I don’t want that. I want the focus to be on our horse industry.”

KBC Executive Director-Treasurer Dr. Todd Gray is opposed to any form of gambling.

“Kentucky Baptists continue to believe there is a better way to provide the financial resources needed by the state than partnering with an industry that harms people through expanding the devastating reach of gambling.”

“This is not the right way to do it,” he said. “The right way to do it is to amend the Constitution, something that advocates for expanded gambling simply refuse to do. That’s been the assumption around here for as long as I can remember. It changed only when we started talking about this issue.”

Family Foundation Attorney Stan Cave agreed with Cothran: “This bill is unconstitutional. A vote for this bill will be a violation of the oath to uphold the Constitution as members of the General Assembly.”

SB 120 cleared the committee on a bipartisan 8-0 vote, and now heads to the Senate floor. Stivers and Senior Majority Leader Damon Thayer back the measure.

The bill could have the most opposition in the House although Speaker David Osborne, R-Prospect, is in favor of it.