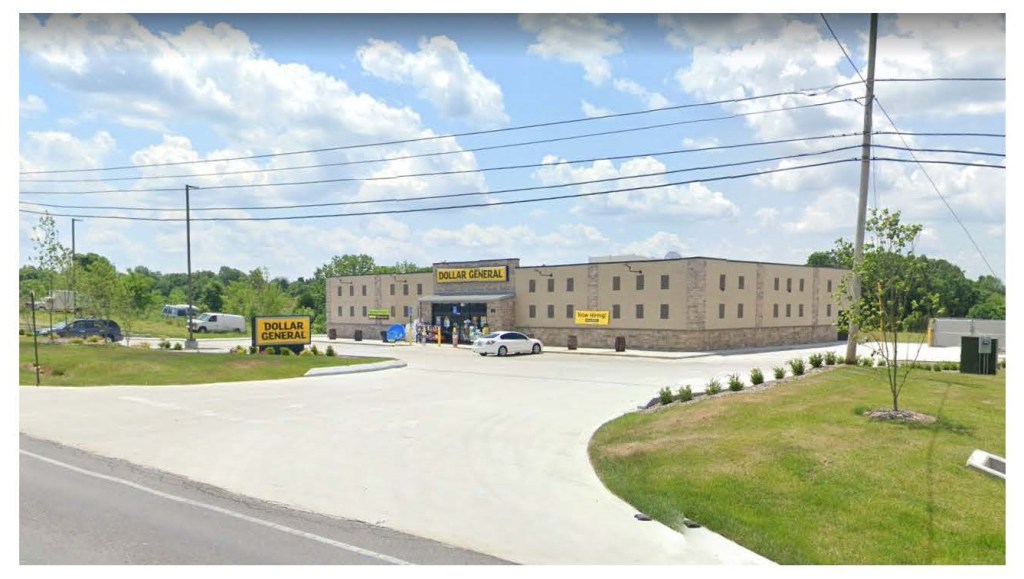 This is just one rendition of a Dollar General Store that was proposed for Ky. 33 near the roundabout. 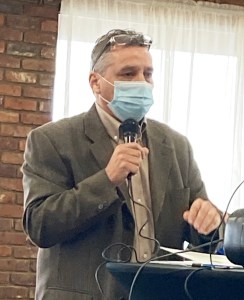 After a two-and-a half hour hearing where attorneys, developers and concerned residents stated their cases for and against zoning regulation changes for a Dollar General Store to be constructed on a portion of a five-acre tract on Ky. 33 on the south side of the roundabout, the commission voted to deny both the FLUM amendment and zone change.

However, the request for nearly the same amendment and zone change for 19 acres on Perryville Road, but without a proposed project in mind, were approved by the commission within 15 minutes and without any debate. 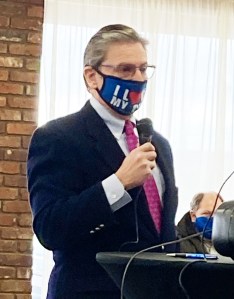 Perros stated that the tract was too wet for farming, “unless it’s frog farming.” There are several businesses already in the area but he personally had no plans for developing it. “It’s a blank slate right now. Someone with a vision,” would need to develop the property, he added.

Both of his requests were approved unanimously.

On the other hand, Kentucky Lodging and Development Co. Inc., and the Peggy Y. Caldwell Irrevocable Trust requested the same FLUM amendment and zone change from Agriculture to General Business, both were unanimously denied by the P&Z commission with considerable debate.

P&Z Director Steve Hunter told the commission he thought the FLUM was more of “an existing” land use map and not really a “future” land use map. He described it as being “consistent of what is actual and is not what we want. … This map is a disaster.”

He said the developer submitted revised conditions including a two-year moratorium on developing the remaining three acres after the Dollar General Store was constructed and agreed to not build a street directly connected to Streamland subdivision. 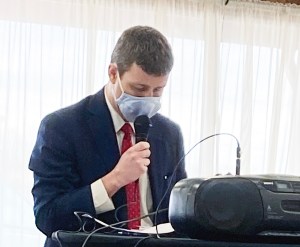 Attorney Justin Manning reads from a prepared speech explaining why is was good for the county to recommend a zoning change for a 5-acre tract to build a Dollar General Store on. (Photo by Robin Hart)

During more than a 40-minute presentation, Justin Manning, attorney for the developers, laid out several reasons why a dollar store at that location would benefit residents and the county. He stated that the Dollar General’s assessment of the area showed there was “a strong need for the Dollar General Store,” because of residential growth along Ky. 33.

He also pointed out that Danville would receive property tax revenue and a small number of jobs would be created. In addition, Manning said “growth should radiate equally” throughout Danville, including the north end. He added that businesses were already established there, referring to WHIR Hometown Radio station and Danville Christian Academy right across the highway.

Kendal Wise, with Vantage Engineering who would be working on the project and as a nearby resident in favor of it, told the group that the area was undeveloped, but the infrastructure and roads were already in place to support growth. The five-acre tract is just a part of the entire farm that will eventually be sold, Wise said.

“You better be saving up some money if you want to prevent growth from happening out there, because it’s all going to become for sale soon.”

Several residents spoke against the proposed development, sometimes passionately, citing safety concerns with vehicles coming to and leaving the store parking lot, and traffic entering and exiting at the school.

They also pointed out that the proposed project was “clearly in violation of the FLUM” which shouldn’t be amended.

Other arguments included: there wasn’t a need for a 14th Dollar General Store in Boyle County; the undeveloped farmland “is what makes us special,” “spot zoning” was not good for the town, and

Dollar General stores usually have their front facades piled up with merchandise and litter is abundant.

In the end, the commission voted to deny both the FLUM amendment change and zoning change requests, which was met with applause from the residents who spoke against the project.

But the debate isn’t over.

P&Z’s decision to deny the developers’ requests is only a recommendation, Hunter said after the meeting. The project will now go before the Danville City Commission to take final action.

In other business, P&Z approved rezoning 30.76 acres at 1695 Lancaster Road from Agriculture and Highway Business to Light Industrial for LMD Holdings LLC. The property is part of a larger distillery project by Francesco Viola, owner of the Luca Mariano bourbon brand.

He said he plans on building up to four rickhouses initially on the property and eventually have 10. Later, he will add a distillery, bottling facility, visitor’s center at the historic William Crowe house, which he’s renovating, and the farm land will support his endeavor.