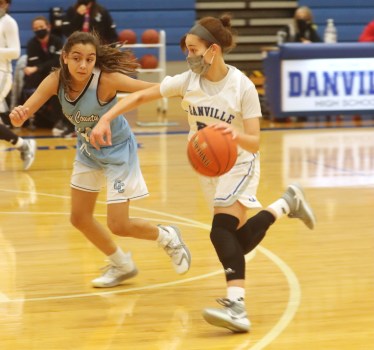 Lara Akers of Danille drives into the frontcourt against Casey County’s Jalee Yocum during the third quarter Tuesday. - Photo by Mike Marsee 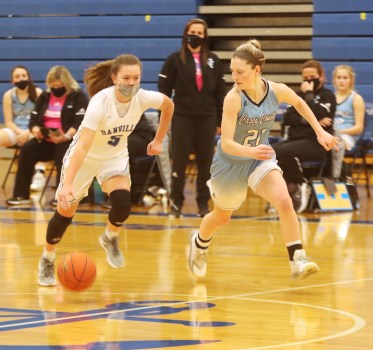 Sam Bottom of Danville pushes the ball across midcourt against Casey County’s Jalee Yocum during the third quarter Tuesday. - Photo by Mike Marsee 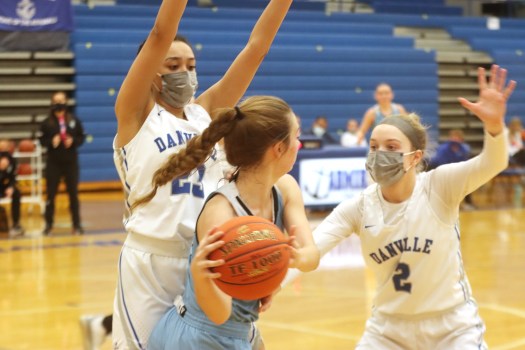 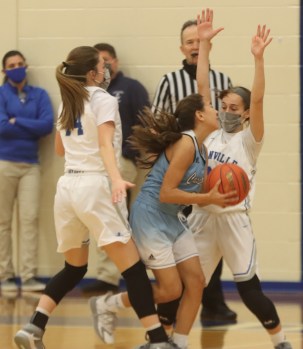 Danville defenders Haley Price-Hancock, left, and Ahyana Burnett try to keep Casey County’s Chloe Dunn from getting to the basket during the second quarter Tuesday. - Photo by Mike Marsee 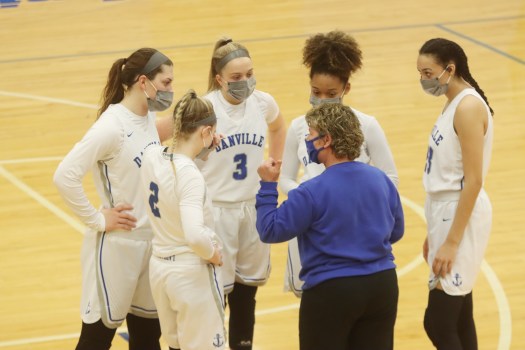 If Judie Mason has taught her players one thing over the years — besides how to play a pretty good brand of basketball, of course — it’s the importance of the All “A” Classic.

In 12 seasons as the girls coach at Somerset and 10 at Danville, Mason has placed a high value on the statewide tournament for small schools.

It’s a big week for her teams, particularly when one of those teams has a chance to make a deep run through the bracket, as the Danville girls did last year and have a chance to do again next week in Richmond.

And the players on this year’s veteran team have gotten the message.

“It’s definitely important,” senior guard Lara Akers said. “Everybody’s got to be on their ‘A’ game for us to have a shot at winning it.”

Danville certainly has a shot. With a core of six seniors, the Lady Admirals (9-3) are rated among the top three teams in the field in the current statewide RPI rankings.

Their 78-42 victory over Casey County on Tuesday night was their fourth consecutive victory, and they rank eighth among all teams in the state in scoring (68.6 points per game) and 11th in scoring margin (22.8).

They will be among the top contenders to win the 12th Region in next month’s postseason tournaments. But for now, it’s all about the All “A.”

“Once it’s done, it’s done, and then we’ll move on to the district and region. But we put everything in leading up to it into the All ‘A’ state tournament,” Mason said.

This will be Danville’s eighth All “A” appearance in 10 seasons under Mason. The Lady Admirals’ best result came in 2014, when they advanced to the championship game before losing to Glasgow.

The seniors who lead the Lady Admirals this year have gone 2-2 at the All “A” in the two seasons since Mason returned to the program following her resignation in 2015. A year ago, they lost in the semifinals to eventual champion Bethlehem, which will be the favorite again this year.

“For the past two years we’ve gone up there and gotten almost there and got knocked out. Now it’s our last time to go out there and give it our all,” senior guard Ahyana Burnett said.

“They made the comment before the region, ‘If we don’t win the region, we might as well call off the season because coach Mason will kill us,’” Mason laughed and said. “So they know how important it is to me, but I try to tell them how important it is for a small school to get an opportunity to play in a state tournament, because a lot of times an All ‘A’ school doesn’t make it to the Sweet Sixteen.

“And who knows if we’ll even have a Sweet Sixteen by that time (this year)? So we need to treat this like this is our state tournament.”

Danville will open the tournament against 4th Region representative Metcalfe County at 1:30 p.m. Wednesday at Eastern Kentucky University’s McBrayer Arena. The Lady Hornets (7-2) have won six straight games but are currently in quarantine due to COVID-19. They last played Jan. 29 but were scheduled to return to action Thursday.

Other tough opponents will lie ahead if Danville advances. A second-round game would follow at 8:30 a.m. Thursday against Bishop Brossart or Murray, and Bethlehem could once again await in the semifinals.

However, Mason wants her players to focus less on their opponents and more on doing what they do well.

That includes being in the best possible condition to play its fast-paced game on back-to-back days on a collegiate court that is 10 feet longer than high school courts. Most first-round games will be played Monday, but Danville’s game and one other will be Wednesday, meaning the Lady Admirals would have to play four games in four days if they should reach the finals.

“So we’re taking the last two weeks of really just trying to get ourselves in shape to run the ball on that big floor,” Mason said. “I’m trying to play a lot of people, because we know in order for us to win it all, we’ll have to play eight or nine people on that big floor.”

Akers said there is some pressure to perform well next week, given this is the last time around for her and her classmates.

But she also said their experience should be an advantage.

“It also helps whenever we have six people that know what they’re doing and can help the others along,” she said.

Mason said there also is an advantage for teams that have played in the All “A” and that hope to win their regions in March.

“I’ve always said the All ‘A’ gives you an advantage at the end because you’re used to playing on a big floor, used to the atmosphere, playing in a state championship,” she said.

And pressure or no pressure, the players said this is always the best week of the regular season for the team.

“The energy’s there (from) the fans, the coaches,” Burnett said. “Coach Mason might be our biggest energizer

Cruising past Casey: Danville scored 25 of the first 29 points Tuesday to defeat Casey at home.

The Lady Admirals led 16-1 before the Lady Rebels got their first field goal with 2:38 remaining in the first quarter.

Five of the eight baskets during that run came on offensive rebounds, and they got 16 offensive boards in all and outrebounded Casey 37-28. As a result of that and the 23 Casey turnovers they helped create, they got up 27 more shots from the field, where they shot 52 percent and the Lady Rebels shot 38 percent.

“I thought we could crash the boards with our height — that’s hard for me to say that I’ve got height — and I wanted them to make sure that we shot until we made it,” Mason said.

All 11 players who dressed scored for the Lady Admirals, led by Tyliah Bradshaw and Desiree Tandy with 15 points each. Love Mays added 13 points.

With the area under an ice storm warning, Danville’s game Wednesday against Garrard County was postponed. No makeup date was announced. The Lady Admirals are scheduled to host Boyle County on Friday and play at Danville Christian on Saturday in their final games before the All “A.”

All “A” appearances: Danville will be making its eighth consecutive appearance in the All “A” Classic last week, an active streak that is longer than any other 2021 participant except Murray, which is making its 10th straight trip to the tourney.

The Lady Admirals will represent the 12th Region for a record 13th time. Somerset has made 10 appearances, and the only other 12th Region schools that have played in the event are now-closed Monticello (five) and Garrard County (two).