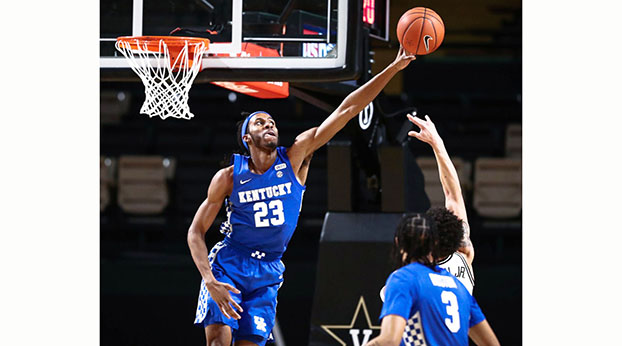 Isaiah Jackson goes up for a block in the first half of Kentucky's 82-78 win over Vanderbilt Wednesday night in Nashville. - SEC Photo

Vanderbilt made a run at Kentucky but the Wildcats never flinched and held on for an 82-78 victory over the Commodores Wednesday night in Nashville.

“That’s a happy locker room,” Kentucky coach John Calipari said after the Wildcats notched their second straight victory. “This team has been through the gauntlet. … They make a run and we don’t fold. We just (kept) fighting and we push (the lead) back to seven. That is big for this team — big.”

Kentucky (7-13, 6-7 Southeastern Conference), completed a regular-season sweep of Vanderbilt. The Wildcats defeated the Commodores 77-74 on Jan. 5 in Lexington as part of a four-game winning streak to open league play.

The Wildcats made eight free throws in the final 33 seconds, including four by Jacob Toppin, to fend off the Commodores, who rallied from 17 points down in the first half to make the game interesting down the stretch.

“Those free throws (we) made, they were daggers,” Calipari said.

Toppin was a difference-maker for Kentucky and finished with a career-high 16 points, scoring 12 of those in the second half. Calipari said Toppin “found money” and took it to the bank.

“I was so happy,” Calipari said. “A real team really doesn’t know who’s going to have that big game and whoever it is, everybody is ecstatic for him in that locker room. We’re becoming a team. For Jacob, this is money that he found, money in the couch. It was a nice bit of change he picked up.”

Toppin made all five of his attempts from the free-throw line and grabbed four rebounds and dished out a pair of assists. When the game was on the line late, Toppin wasn’t intimidated by the charity stripe.

“It’s just a mentality, that you’re going to make the shot and no doubting yourself,” Toppin said. “I just had all of the confidence in the world that I was going to make those free throws when they mattered.”

Calipari wasn’t surprised by Vanderbilt’s comeback attempt but praised his team’s ability to hold off the hosts in the second half.

“Everybody is going to make runs,” he said. “What I told them, they will make a run and then you need to make a run back at them. That’s the game of basketball. You try to make the last run at the end of the game and at least hold on, which is what we did.”

In addition to Kentucky’s late free throws, Davion Mintz provided a cushion for the Wildcats with a clutch 3-pointer after the Commodores pulled to within 71-68 with 1:41 remaining. Mintz led the Wildcats with 18 points and made four of the team’s eight 3-pointers.

Isaiah Jackson followed Mintz and Toppin with 15 points and nine rebounds, followed by BJ Boston with 12 and Olivier Sarr with 10. Boston drained a pair of shots from long range early and scored eight of Kentucky’s first 15 points.

Sparked by Boston, the Wildcats, who raced out to a 10-0 lead, built a 17-point lead at 25-8 before the Commodores begin chipping away at the lead unsuccessfully in the second half.