Football coach supporters taking a closer look at the district 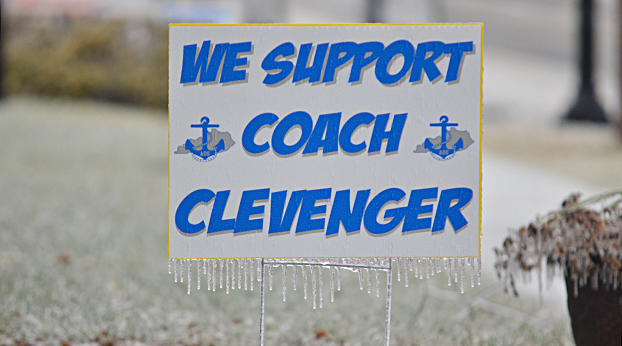 BY ROBIN HART AND MARTY WARREN

The supporters of Danville High School head football coach Clay Clevenger, whose contract was unexpectedly not renewed for the next school year, are not sitting by quietly.

Since Jan. 29, when Clevenger announced that Danville Schools Superintendent Dr. Tammy McDonald had not renewed his coaching contract for the next football season, there have been dozens of social media posts, a petition is being circulated, a rally was held in front of the school, individuals voiced their opinions at school board meetings, and several letters in support of coach Clay Clevenger have filled the pages of The Advocate-Messenger. And the support seems to be intensifying.

Clay Albright, president of the Champions Club which is the booster club for DHS football said, “In my role as the president, it is important that I support the coach and the players beyond just fund raising. So that’s why I’m fighting for our coach.” 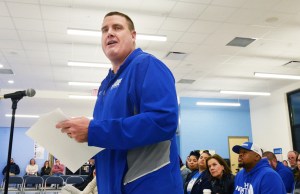 Danville High School Head Football Coach Clay Clevenger talks to the Danville Board of Education in defense of not cutting stipends for the football program last year. (File photo by Robin Hart)

In an earlier story, Clevenger said, “I had no idea this was coming. … Superintendent McDonald is the one that presented me with the paper and I asked her, ‘Is there a reason?’ She said ‘Not really, other than that we feel we should go in another direction.’”

He added, “If you make a coaching change there should be a contingency plan in place. They should have gone to any assistant coach and asked them to continue our weight training with the kids and your new interim head coach until we find one. That’s what good leadership does. They have no back-up plan and quite frankly, didn’t put any thought into what they were going to do.

We’re two weeks out and there is still no communication. I have a feeling it’s not even going to be into next week. That angers me that they can’t take the time to show these kids the respect they deserve.”

Albright said, “I think the thing that has bothered me more than anything is the whole public relations disaster that we have had. … They haven’t taken 5 minutes to send an email. It literally doesn’t take any time at all to draft an email and send it to them.”

Albright mentioned that locks on the door of the weight room were also changed unexpectedly. “They (the administration) claimed that when the locks were changed it was part of a process that had been going on for a while, and that’s fine if you want to believe that. However, I know for a fact – I have proof – that they changed every lock in Danville High School in October of 2018. Why are they changing them again two years later, and it happened on the same day of the rally? In the middle of a coaching change and a community uproar?”

Albright said, “I’m hoping that our board can right the ship. They are the only ones that can effect the outcome and try to change our public perception. We are taking a beating in our district because of one personal decision to control the people that works for them with underhanded techniques by being retalitory and not promoting a positive working environment.

“This story of an unjust firing has really gone statewide and beyond. But also it needs to be noted that though the firing of Coach Clevenger sparked such an uproar, it has now gone much further than just his firing. It has shown systemic issues within our current district administration that includes everything from inappropriate behavior and a lack of compassion and borderline unethical behavior, to racial and diversity issues, to many documented cases of retaliation against school and district staff that speak out. It’s become a toxic work environment filled with fear. That’s not how it should be. We just need someone that can give us direction and we are lacking that right now.”

Local attorney, football sponsor, and parent of two sons in the Danville School District, Patrick McClure said, “I get that they can’t discuss the firing because it’s a personnel matter, but they certainly can talk to them about the process now, who is going to handle spring drills, how we get back in the weight room, and maybe just maybe what the ‘new direction’ is.”

McClure said the superintendent’s firing of Clevenger, “has caused us to look much deeper into where our money is going.” McClure said Danville School District taxes are higher than 97% of the state.

He added, “Let me give you something far more concerning than a football coaching decision. … in a school with 16.4% African American population, we somehow have gone to basically 2% who are minority teachers under Dr. McDonald’s leadership. There are exactly zero African American teachers at Danville High School.”

He added, “Since the current administration was established, we have lost far too many teachers, teacher aides, coaches, or instructional assistants; almost all of whom are also graduates of DISD, and who very well could or would have stayed in these roles until they retired. Those are issues which not only can be, but must be, discussed.”

McClure stated that Clevenger had been “directly involved in the hiring of many of those African American male role models who have now lost their jobs or been forced into other positions in other schools, and every single one of them was an alumnus of Danville High School. Losing his presence in our communities would negate everything the state board of education appears to be promoting. That is absolutely something that this board must address, not only because the state requires it, but because the ‘direction’ this administration has taken us is morally unconscionable.”