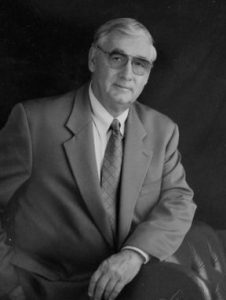 Larry passed away Feb. 15th in Danville, Ky from complications of age and Covid. “Big L”, as we called him was born in Bottineau, North Dakota on March 15th of 1930. He was just short of 91 years.

Big L’s odyssey began when he went from North Dakota to Portland, Oregon as a Young Man, graduating from Jefferson High School and attending Lewis and Clark College. He was athletic, participating in Football, Track and competitive Ski Jumping while in school. Skiing always remained a passion over the years, and he introduced his three sons to the sport. Golf followed later on and he enjoyed many years as a member of the Danville Country Club.

Larry married Janet Pease in the early 50’s and Farming took them to Malin, Oregon where his children were born. Malin was a great place to raise a young family. Career choices in the Agricultural Industry prompted a move to Idaho; first to Caldwell and then Twin Falls. Larry enjoyed success and was subsequently promoted to Product Manager with Hesston Corp. in Newton Kansas, where he was involved in the design and manufacturing of Large Hay Bailers, among other implements.

Career changes again took him to Ohio and then on the Danville Ky. When asked once about his choice to remain in Ky., he broke out into song verse with “My Old Kentucky Home”. We knew he was there to stay!

He is survived by son Jerry and wife Jill of Eagle, Idaho. Son Brady and his wife Diana of Meridian, Idaho along with Granddaughter Maria Marshall, Husband Mike and Great Grandkids Hayden and McKall of Caldwell, Idaho; Granddaughter Tiffany Barbour, Husband Jody Gorton and Great Grandson Max Gorton of Boise; Granddaughter Amanda and Husband Jeremy Harmon with Great Grandkids Lilly and Emma in Utah; and Daugher-in-Law Lorraine Barbour and Grandson Corey of Boise, Idaho. A special thanks goes out to Barbara Boyd, who was a great companion and patient friend for the last years of his life, and to the Family of Shirley Clark, who provided him with a wonderful second Marriage and family in Danville.

Due to Covid there will be no services at this time in Danville. Big L’s ashes will be Interred at Lincoln Memorial Park in Portland, Oregon later in the year. The online guestbook and Hugs from Home are available at www.stithcares.com