State to get a 29% boost in vaccine supply next week 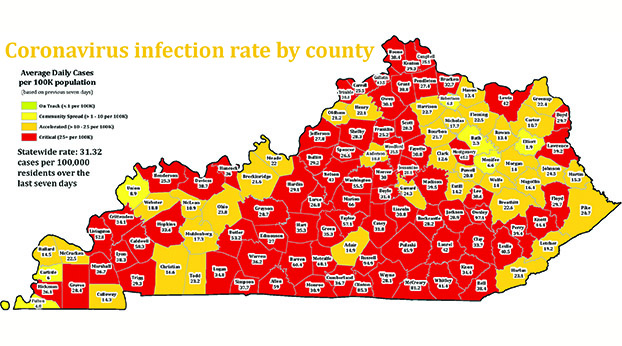 Kentucky’s coronavirus vaccine supply will increase by 29 percent next week, and the amount being sent through the federal pharmacy program will double, Gov. Andy Beshear announced Tuesday.

The latest increase means the weekly vaccine supply will be about 87,860 doses, up from 53,800 when vaccine rollouts first began the week before President Joe Biden took office . Since the Biden administration took office, supply has increased 57%, Beshear said: “That is moving in the right direction.” The overall increase since the start of the rollouts has been 63%.

Also, the federal pharmacy program, which serves 78 Walgreens branches and 47 independent pharmacies that are part of the Good Neighbor Pharmacy brand, is doubling its weekly doses from 13,000 to 26,000, Beshear said.

The state vaccination report shows 542,394 Kentuckians have received their first “shot of hope,” including more than 70,000 in the week beginning Feb. 9, Beshear said, “so this vaccination machine is working.”

Beshear said the Kroger regional vaccination sites are reopening, after closing because of the bad weather. He said the regional site in Frankfort is set to open Wednesday and those in Lexington, Covington and Bowling Green are to reopen on Thursday, despite a bad weather forecast.

“We’re gonna do everything in our power to keep our regional sites open these next days,” he said. “We’ve already had to reschedule too many appointments.”

Monday, Beshear announced that child-care workers would be moved to Phase 1B of vaccination, along with people 70 and older, first responders and K-12 personnel, who are being prioritized now.

Beshear again called for patience from those who aren’t yet able to get a vaccine, but did say Phase “1C is coming, and it’s coming soon.” This group includes all essential workers, anyone 60 and older and anyone 16 or older with certain health conditions.

Beshear said five cases of more contagious variants of the virus have been reported in the state: one in Jefferson County and four in Northern Kentucky. He said he thinks the state can ward off a surge in cases from such variants because Kentuckians “are wearing masks better than ever” and because of the “urgency” the state has placed on vaccination.

Asked by Kentucky Health News if the state is doing anything to help the hottest counties bring their rate down, Beshear said those counties are still asked to follow the red-zone recommendations, but at this time the state has not targeted any guidance on them.

He added that the state is willing to work with any local government that asks for help, and with fewer red counties on the list, some form of direct intervention might be something the state could consider.

How to protect your heart when shoveling snow