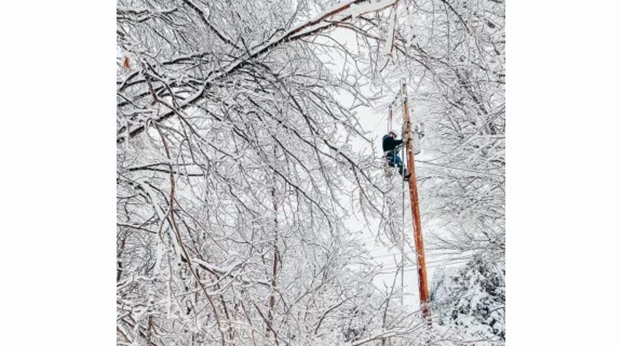 With some power outages in Eastern Kentucky in their tenth day, electric cooperative crews on Friday continued to address major damage to the system, including snapped poles. Efforts have been complicated by debris, blocked roads and relentless falling trees, branches and ice.

With a rebuild of significant parts of electric systems necessary, co-ops in Eastern and Southeastern Kentucky continue to gradually but urgently restore power. Co-ops began Friday with about 36,000 consumer-members without power. As of 4pm Friday, that figure had dropped to 27,601. At the height of the outages, more than 100,000 consumer-members were without power on Tuesday morning.

Despite the many challenges restoring power after successive winter storms, one factor that has not been a problem is access to the material and equipment to replace damaged and destroyed infrastructure. Kentucky’s electric cooperatives are cooperative owners of United Utility Supply Cooperative, which has been able to deliver all of the critical materials, such as transformers, conductor (electric wires), hardware, grounding equipment, utility poles, tools, and safety supplies.

Though crews welcome the forecast for temperatures in the 40s and 50s this weekend, thawing ice and snow can also cause trees and branches to “rebound” or “snap” back from the decreased weight, breaking and coming down on power lines and causing new outages.

Local co-op crews are getting assistance from about 800 additional personnel, including 331 mutual aid workers from electric cooperatives in Kentucky, Georgia, Alabama and Indiana. Co-ops have also brought in hundreds more contractors to assist as the eastern half of the state continues to recover from the succession of three winter storms in eight days.

“Because electric cooperatives serve the ‘last mile’ in some of the most remote and rural areas of Kentucky, including the forests and mountains of Eastern Kentucky, the recovery from natural disasters such as these ice storms can be a long and arduous process,” said Chris Perry, president and CEO of Kentucky Electric Cooperatives, the statewide association which supports local co-ops. “That’s why we have been urging Kentuckians to prepare for prolonged outages, since the first forecasts predicted significant ice accumulation. Know we are working as quickly as we safely can.”

With Kentucky in a State of Emergency, the National Guard is assisting with getting members to warming centers, food, water, medicine and oxygen.  Co-ops continue to encourage members in need of assistance or supplies to contact their local County Judge Executive’s Office (Fiscal Court) or the County Emergency Director for guidance and assistance.

While indoors, those without power will turn their focus to staying warm. If homes are not using a generator, keep warm air in and cool air out by not opening doors to unused rooms. Do not open doors to the outdoors unless necessary.

Food safety is also important when there is a prolonged outage. Keep refrigerator and freezer doors closed as much as possible, and eat perishable food first. Keep food items in coolers and packed with ice to keep them from going bad if an outage lasts longer than a day. Once the refrigerator reaches temperatures higher than 40 degrees Fahrenheit, foods can become unsafe to eat.

To protect homes’ electrical equipment during an outage, turn off and unplug all unnecessary electronics or appliances. This will keep equipment from being damaged by surges or spikes when the power returns.

Once an outage is over, there are still safety precautions to take. Electrical power lines could still be down. If you see downed power lines, do not touch them. Call your local co-op or 911.