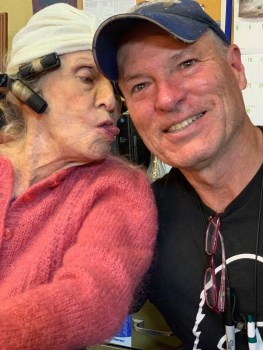 Robby Henson posted this photo to his Facebook page in memory of actress Cloris Leachman, who died on Jan. 27. - Photo submitted 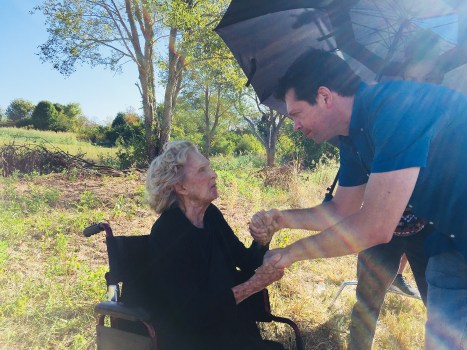 Leachman is pictured with director of “Not to Forget,” Valerio Zanoli. - Photo submitted 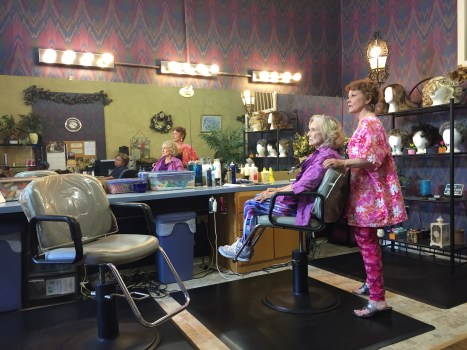 Leachman sits in a hair salon by Burke’s Bakery during the filming of “Not to Forget,” which was filmed in Boyle and surrounding counties. - Photo submitted

Legendary actress Cloris Leachman, who died at the age of 94 on Jan. 27, was no stranger to Boyle County.

Robby Henson, artistic director of Pioneer Playhouse, worked on the set of an independent film with Leachman, who won an Academy Award for best supporting actress, as well as several other awards for her work in film.

It was on the set of “Not to Forget,” which was being filmed around fall 2019 in and around Boyle County and hasn’t been released yet, Henson said. It included a chase scene with help from the Danville Police Department in a city garage behind The Hub, scenes in Junction City and downtown Perryville, and scenes at Ephraim McDowell Regional Medical Center.

Henson said it’s a story of a juvenile delinquent making peace with his family on a Kentucky farm. Henson was working as a production designer for the movie, and Leachman originally was cast as a gossipy hair salon owner, but since Leachman had issues with her mobility, her role changed to a woman getting a perm at the salon, her lines were reduced to “a few quips,” and someone else was cast as the salon owner, Henson said. She was in Danville for less than a week and stayed at The Farm Inn, a bed and breakfast in town, and shot scenes at a hair salon next to Burke’s Bakery.

“I think all of us were kind of surprised at how immobile she was when she got here,” he said.

Henson said part of him was concerned about how Leachman’s agent was still selling her for roles despite the condition she was in.

“And then the other part of me said, ‘Well, heck, if you’re a person passionate about your career, what better thing to do at the end of your career than keep working at it?’” he said. “Maybe that’s what a great actress really wants to do, is to keep working.”

Since one of Henson’s roles was to make sure production got done as quickly as possible, he became the person to help lift Leachman in and out of her wheelchair and into her car, wheel her onto set and help her into the chair on set.

“And so we kind of had this unique little relationship that can develop in a quick time, where I was a person kind of in charge of her on the set, and she was still spicy and had a real humorous streak that came through,” he said.

When Henson took pictures with Leachman, for example, she’d try to stick her tongue in his ear, and when the director, Valerio Zanoli, asked her to touch an actress, she’d “inappropriately” touch the actress “just to get a rise out of everyone,” Henson said. And once, when he brought her a water bottle and she needed help lifting it to her mouth, he lifted it a bit too high and fast, and she lowered his hand.

Henson said in biographies about her he read after she died, they always mentioned her sense of humor being “profound and pronounced.”

Since Henson describes himself as a film fan and film historian, he can remember Leachman’s accomplishments. Her role on “Not to Forget” was her final film role before she died.

“So it was just a thrill to work with her in her final days,” Henson said.