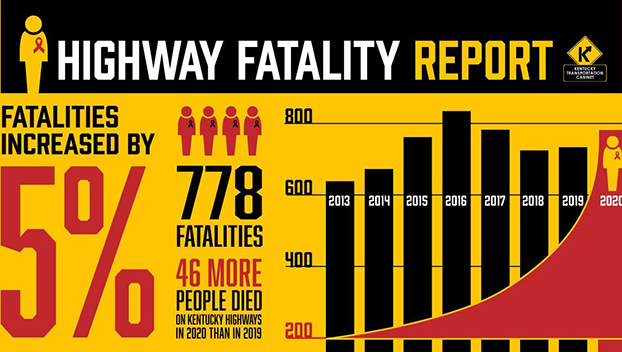 Despite travel restrictions and closures in Kentucky due to the COVID-19 pandemic, which led to less travel, the number of highway deaths rose in 2020.

Initial data from the Kentucky Transportation Cabinet’s Office of Highway Safety, indicates there were 778 fatalities in 2020, compared to 732 in 2019, a 5% increase.

“2020 was a year of devastating loss for Kentuckians, but what makes deaths even harder to accept is when they could have been prevented,” said Gov. Andy Beshear.  “These figures are unacceptable to us and they should be unacceptable to every driver, every person, in our state.  We all have to be more vigilant about personal safety and responsibility behind the wheel if we are going to reverse this trend.”

“While numbers are important to identify potential issues and areas of concern, highway safety is not all about numbers, it’s about people,” Gray said.  “These are fathers, mothers, sisters and brothers who left loved ones behind.  These lives could have possibly been saved with the simple snap of a seat belt.”

According to the National Highway Traffic Safety Administration, wearing a seat belt gives motorists the best chance of preventing injury or death if involved in a crash.  Properly fastened seat belts hold the strongest parts of the body, such as the chest, hips and shoulders.  A seat belt spreads the force of a crash over a wide area of the body, putting less stress on any one part, and allows the body to slow down with the crash, extending the time when the crash forces are felt by the occupant.

“We face a great challenge, and we pledge to continue working with our local, state and federal partners until we reach our goal of zero deaths on Kentucky roadways,” Gray said.  “However, we need the public’s help.  We’re asking motorists to commit to save driving behaviors when behind the wheel, and for everyone, both drivers and passengers, pledge to always buckle up.”

The fatality figures will remain preliminary until all highway crash data is collected, and a final report is expected to be released in April.

So far in 2021, preliminary numbers indicate there have been 79 highway deaths, which is down five compared to the same time last year.