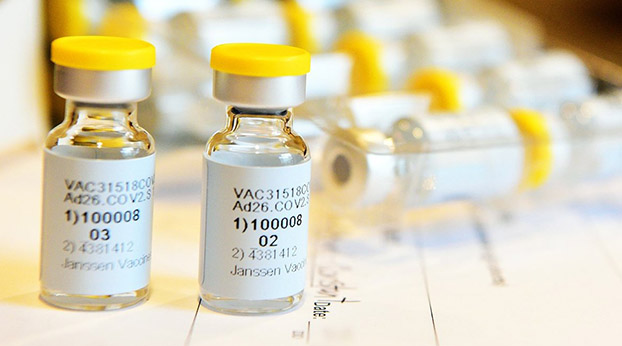 Johnson & Johnson is expected to get emergency approval for its vaccine this weekend.

Kentucky’s COVID-19 positivity rate continued to fall on Friday, Gov. Andy Beshear announced that he is extending the state’s mask mandate, and a new vaccine could be approved this weekend.

Other positive news included a drop in new cases of the coronavirus reported to state public health officials.  There were 1,180 new cases, which is down 267 from Thursday, but brings Kentucky’s pandemic total to 402,926.

The positivity rate on Friday, based on a seven-day rolling average, was 5.52%, continuing a week-long decline.

The number of deaths reported was 30, which was down 13 from Thursday, and raises to 4,600 the number of Kentuckians lost to COVIID-19.

The latest victims ranged in age from 53 to 87.  Jefferson County had 11 deaths for the second day in a row; four were from Daviess County; Mercer three; Clark and Pulaski each had two; and there was one apiece in Carlisle, Floyd, Garrard, Lincoln, McCreary, Perry, Rockcastle, and Rowan counties.

A total of 818 Kentuckians were hospitalized due to the coronavirus on Friday.  Of them, 218 were in the ICU and 105 on a ventilator.  All three numbers were lower than on Thursday.

“I hope all of our Kentucky families have a great, safe weekend,” said Gov. Beshear. “We’re still not out of the woods with this horrible virus, but every week, we’re taking another step forward in our fight against it.”

The governor’s mask mandate will remain the same.  The executive order issued Friday becomes effective Sunday for another 30 days.

More relief could be on the way shortly in the form of a new vaccine to fight the coronavirus.  The Food and Drug Administration announced on Friday that they held a meeting of the Vaccines and Related Biological Products Advisory Committee.  Members discussed the Emergency Use Authorization request for the Johnson & Johnson COVID-19 vaccine, which is designed for those 18 years of age and older.

Final FDA action could come as soon as Saturday, according to the New York Times.

The FDA also said that they have notified their federal partners involved in vaccine allocation and distribution, so they can execute their plans for timely vaccine distribution.

The Johnson & Johnson vaccine only requires one injection, while both Pfizer and Moderna vaccines need two, administered 30 days apart.

Beshear’s next scheduled live press briefing on COVID-19 is expected to place Monday afternoon at 4. His office will issue daily reports throughout the weekend.