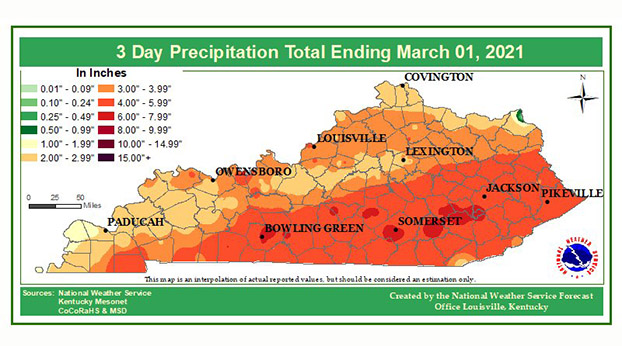 Gov. Andy Beshear has declared a state of emergency due to the extremely heavy rainfall across most of Kentucky throughout the weekend, prompting numerous flood watches and warnings.

The Kentucky Division of Emergency Management has activated the State Emergency Operations Center in Frankfort and is monitoring reports from county emergency services agencies across the state.

“By declaring a state of emergency, we can mobilize the state resources needed to support the cities and counties affected by this heavy rainfall,” said Gov. Beshear. “We are acting swiftly to ensure the safety and security of Kentucky families and to get the needed help to our communities.”

As of Monday morning, 13 counties and cities have declared states of emergency, including Breathitt, Calloway, Casey, Elliott, Estill, Johnson, Knott, Magoffin, Owsley, Perry, and Pike counties; as well as the cities of Paintsville and Salyersville.

The Kentucky National Guard has been activated and is responding to assist with high water emergencies.

“The impact of extremely heavy rainfall and flash flooding across the Commonwealth led to numerous emergency rescues and evacuations in counties from west to east,” said Michael Dossett, director of Kentucky Emergency Management. “The Governor’s state of emergency activated the National Guard, and we have been coordinating requests for assistance from counties across the state.”

Dossett added: “We’ve experienced flooding in numerous regions. Please be aware of the presence of emergency responders and use caution near the many closed local and state roadways due to high water.”

–Avoid walking or driving through floodwaters – TURN AROUND. DON’T DROWN!

–Do not drive over bridges that are above fast-moving floodwaters. Floodwaters can scour foundation material from around the footings and make the bridge unstable.

–If there is a chance of flash flooding, move immediately to higher ground.

–Avoid camping or parking along streams, rivers, and creeks during heavy rainfall. These areas can flood quickly and with little warning.

Some of the larger rivers are not expected to see their crest for several more days.

Ironically, this is Severe Weather Awareness Week in Kentucky.