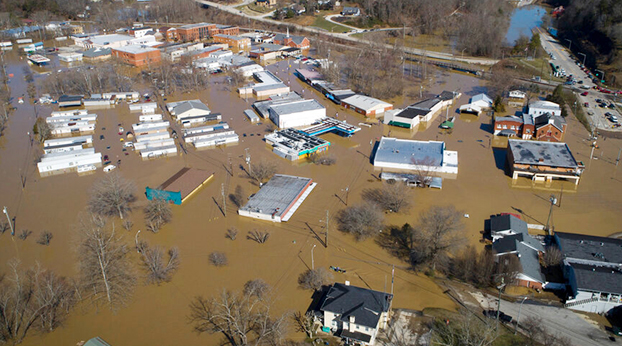 State and local officials across Kentucky are continuing their efforts to help recover not only from three ice and snowstorms in February, but also severe flooding that began over the weekend, due to heavy rain.

During his COVID-19 briefing on Tuesday, Gov. Beshear brought in officials to talk about dealing with the ongoing situation statewide.

“What we have seen is some of the worst rain in western Kentucky in parts of Calloway County, to parts of cities underwater in eastern Kentucky. So many of our people are struggling right now,” said Gov. Beshear. “We have the National Guard out in force working with numerous local officials who are providing great leadership.”

“We have reached out to the Federal Emergency Management Agency and asked FEMA Region 4 to send their lead investigator to the state of Kentucky to look at the homes that were damaged and those that have been inundated,” Dossett said. “This is truly a record-breaking event. The water is still high, and this is not over.”

The governor announced several state agencies, including the Kentucky National Guard, are responding to a levee breach in Jackson, Kentucky, providing emergency transport for around 1,000 Kentuckians to high ground using high-axle vehicles.

Local emergency management personnel issued evacuation orders for residents in the affected areas, Lakeside Estates and Brewers Trailer Court, out of an abundance of caution, after officials noticed reports of water running through a roughly 25-foot-long “pop-out” slip beneath the embankment.

Recent heavy rains have elevated the North Fork of the Kentucky River, creating pressure that is pushing water through the dam that sits below Kentucky-15 in Jackson, and connects to Panbowl Lake.

The lake was impounded in the early 1960s when the current alignment of KY 15 was built.

The Energy and Environment Cabinet has two inspectors and a dam safety supervisor on site. Sandbags will be placed along the areas that have eroded in an attempt to stop the flow of water under the highway.

“Transportation officials and representatives from partner agencies have been on the scene monitoring the situation to ensure every appropriate action is taken to keep Kentuckians safe,” said Chief District Engineer Corbett Caudill. “Transportation Cabinet geotechnical and engineering experts are en route from Frankfort to survey conditions and advise on next steps.”

“The corrective action that is being taken as we speak is to place sandbags in the area that has been eroded,” said Transportation Cabinet Secretary Jim Gray.