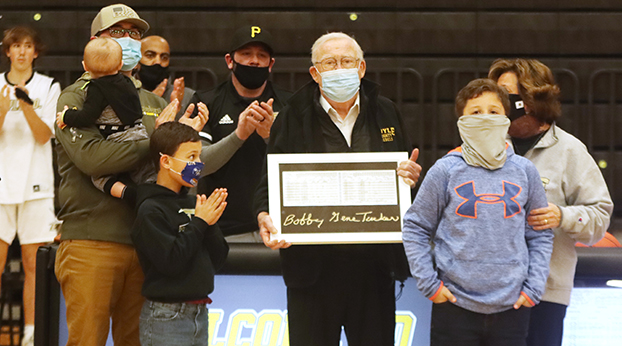 Bobby Tucker is applauded by members of his family after Tucker was presented with a plaque during a ceremony Monday honoring him for his 53 years of service as the boys basketball team’s scorekeeper. - Photo by Mike Marsee

Bobby Tucker will always have a place at the Boyle County scorer’s table.

Tucker, the longtime Boyle County boys basketball scorekeeper, was recognized Monday night for his 53 years of service to the program.

He was joined by four Boyle coaches and about 10 family members for the ceremony held prior to the Rebels’ game against Lincoln County in the gym where he documented so many games.

Tucker kept the book for the Rebels at home and away games for 53 seasons before giving up his seat at the table after the 2018-19 season.

He scored nearly 1,500 Boyle games – including all four of the program’s 12th Region championship victories and all 14 of its 45th District championships – under eight head coaches.

“Bobby Tucker epitomizes what I think it means to be a Boyle County Rebel, when you show that kind of commitment and dedication to a program,” said Webb said, who has been part of the program for most of two decades. “It blows my mind that he did it for 53 years. I’ve been here almost 20 (years), and I don’t remember him missing more than maybe two games.”

Tucker, 87, said he was pleased by the honor but saddened that his late wife Emma could not be part of the event. Emma Tucker died Feb. 5 at age 87.

“She loved this school and she loved the teams,” Bobby Tucker said.

The Tuckers, who were married for 66 years, volunteered their time at Boyle athletic and band events for decades. They were inducted jointly into the school’s athletic hall of fame.

Tucker said he was helping the basketball program in various ways before becoming the scorekeeper.

“I did a lot of stuff before that, and it just turned out one night somebody said, ‘You need to take it. There’s nobody here to take it,’” he said.

“We decided that didn’t look too good, so I quit taking JV games,” he said.

An image of a Boyle game scored by Tucker and an image of his signature were displayed as part of the signage on the scorer’s table and on a plaque presented to Tucker. The game was the Rebels’ first-round victory in the 2015 Boys Sweet Sixteen, a 60-59 victory over Lexington Catholic that started their run to the final four.

“That was really a great game,” Tucker said. “They thought they had it won, and their crowd had all run out to buy tickets (for the next round) … and we came back and beat them.”

Webb said the team had hoped to honor Tucker at its basketball banquet after last season, but that banquet was never held once the COVID-19 pandemic erupted.

“A guy like that needs to be honored over and over. What little we did for him tonight was nowhere near what he deserves,” Webb said. “He’s one of my heroes as far as Boyle County goes, and I think the world of him and what he’s done.”