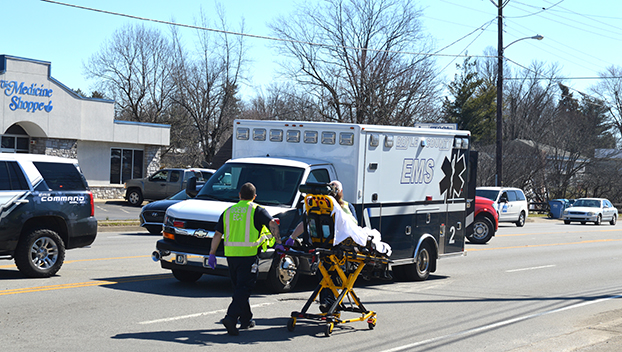 After an automobile accident occurred on Hustonville Road, one person was injured and was wheeled off in a stretcher by Boyle County Emergency Medical Services. - Photo by Olivia Mohr

Boyle County Emergency Medical Services, the Danville Fire Department and Danville Police Department were dispatched to Hustonville Road and S. Second Street Wednesday afternoon after a two-vehicle accident that resulted in one complaint of injury.

Fire battalion chief Mike McCurdy said other than the person who was injured, “Everybody else was fine.”

There were no other interventions other than the EMS transporting the individual who was injured to receive medical attention. Police regulated traffic flow to keep the scene of the accident safe as fire trucks and police cars gathered.

Bustle and McCurdy did not know the severity of the injury of the individual who had complaint of injury.