Cal throws egos out the window as Cats prep for postseason 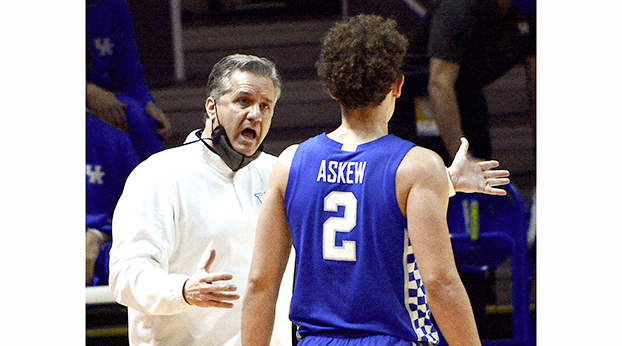 In a season filled with inconsistency, the Wildcats (8-15, 7-9 Southeastern Conference) take a two-game losing streak into the rescheduled contest against the Gamecocks.

In preparation for the SEC Tournament next week in Nashville, Calipari said the Wildcats are “playing to win the game.”

“Forget about next game or forget about egos,” Calipari said. “Those are out the window now. If we start a game and we’ve got some guys who won’t battle and fight then we know we have Lance (Ware). Lance looked good in practice (Thursday).”

In addition to Ware, Calipari said Dontaie Allen, who has played sparingly recently, will likely be relied on to help give the struggling Wildcats a boost.

“He’s not been shooting it particularly well in practice and stuff, but you know what? Every time he misses, we stop and everybody on the team does to him what? ‘Keep shooting.’” Calipari said. “We’ve got to get him into a different mindset right now so he can go in the game and let loose and let shots go.”

Although Calipari has traditionally remained consistent with his starting lineup and substitution patterns, he admitted Friday he’s more concerned with winning as opposed to past coaching habits.

“If you’re not doing anything to help us win, then someone else has got to play,” Calipari said. “It’s just how it is. The inconsistency has kind of let us to just like, ‘OK let’s try something different.’ I’m not just going to let a game go. It’s not how I do this.’”

Calipari said Thursday’s practice session was productive and said the Wildcats are attempting to “stay in the moment.”

“(Thursday’s) practice was pretty good,” Calipari said. “It was rough. We had a couple of busted-up lips. It was interesting. We had a little thing, a little freak thing that I don’t think will affect anything but, you know, we had a guy come down on an ankle funny. It didn’t really step on anybody; it just came down funny. Nothing crazy, but he’ll be fine, I believe. But it was a good practice.”

“We did a lot of one-on-one rebounding, lot of five-on-five full court, lot of rebounding and snatches, a lot of running and stuff. So, I feel like everybody got their lips busted yesterday. We needed it. Everybody, I think, took it well.”

Although the team has endured an up-and-down campaign, Jackson said the Wildcats are taking it “one game at a time” down the stretch.

“We got a game this Saturday (against South Carolina) and we’re looking forward to that,” he said. “I think it’s just confidence right now. Everybody has been working in the gym this last week.

“After a loss, everybody is down but we always find a way to pick each other up. Every day in practice we’re working, after practice, before practice, stuff like that. Everybody’s confidence is high right now and we’re looking forward to this Saturday and next week too.”

Calipari, Brooks confident Cats can finish the season on…