Channing Ford of Danville beats Boyle County’s Jagger Gillis to the basket for a layup during the second overtime Saturday. - Photo by Mike Marsee 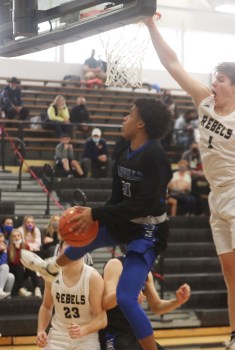 Jalen Dunn of Danville goes up for a shot as Boyle County’s Luke Sheperson defends during the fourth quarter Saturday. - Photo by Mike Marsee 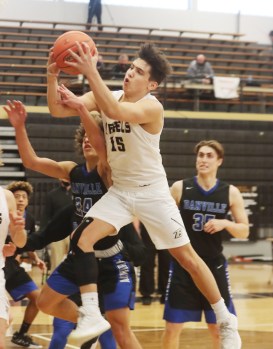 Owen Barnes of Boyle County grabs a rebound before Danville’s Jarius Bryant can get to it during the third quarter Saturday. - Photo by Mike Marsee 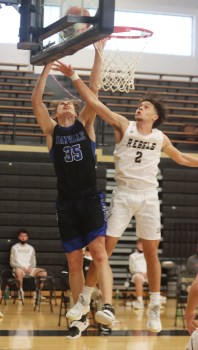 Ethan Wood of Danville is fouled by Boyle County’s Luke Imfeld as he attempts a shot during the second quarter Saturday. - Photo by Mike Marsee 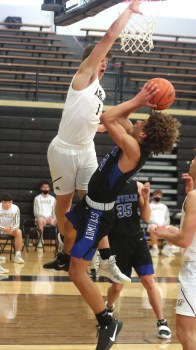 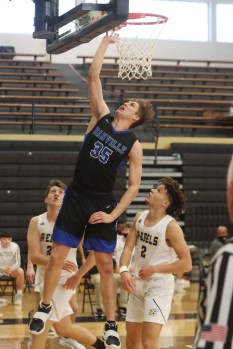 Ethan Wood of Danville goes up for a putback as Boyle County’s Luke Imfeld, right, and Jagger Gillis look on during the second quarter Saturday. - Photo by Mike Marsee 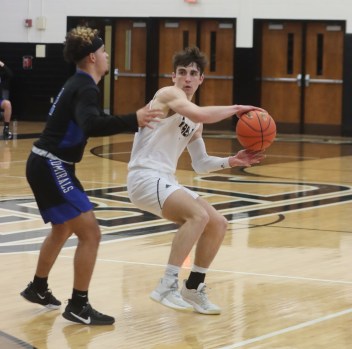 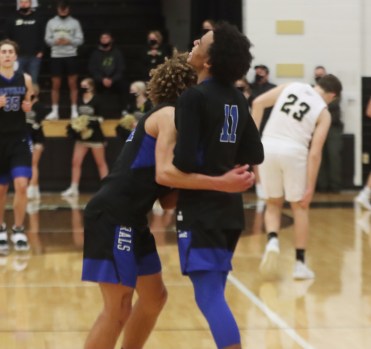 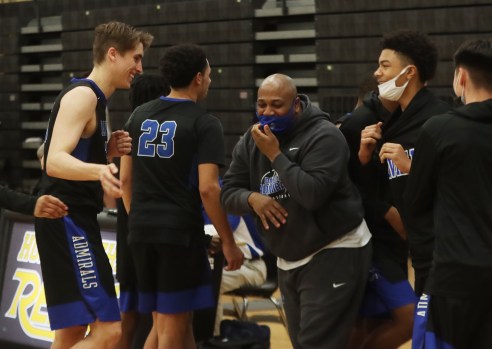 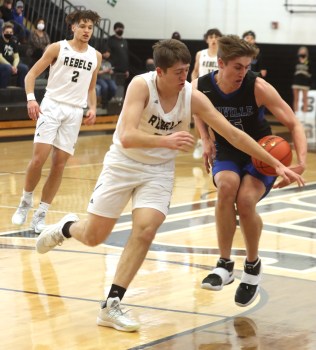 Ethan Wood, right, of Danville knocks the ball away from Boyle County’s Jagger Gillis for a steal during the first quarter Saturday. - Photo by Mike Marsee 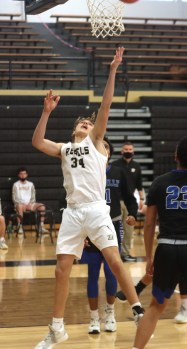 Jakei Tarter of Boyle County puts up a shot in the lane during the third quarter Saturday. - Photo by Mike Marsee 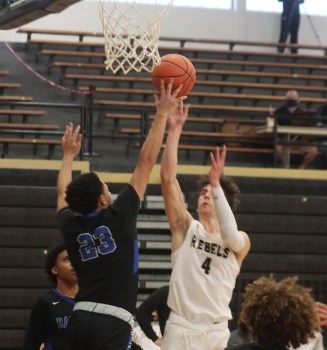 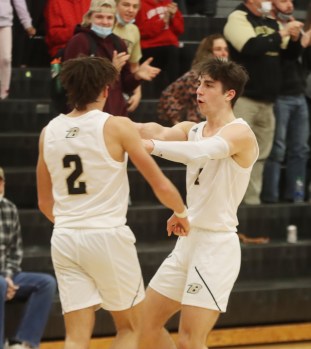 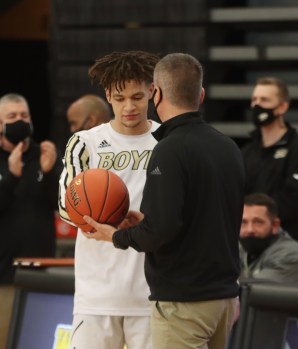 Luke Imfeld, left, of Boyle County is presented with a basketball by Boyle coach Dennie Webb prior to the Rebels’ game Saturday against Danville in recognition of Imfeld having scored his 1,000th career point earlier in the week. - Photo by Mike Marsee

They weren’t going to get pushed around again.

Boxed out, battered and beaten up by their biggest rival less than two weeks earlier, the Danville boys played a decidedly different game Saturday to get some payback against Boyle County.

The Admirals were the aggressors in an 82-77 double-overtime victory over the Rebels, the top-rated team in the 12th Region.

“This was really a big game for us. They beat us by 24 on our home floor, outplayed us, outworked us. They showed more heart that we had in that game. Roughed us up, really,” Danville guard Dante Hayden said. “So coming into this game we just wanted to match their energy, match their aggressiveness.”

In so doing, a Danville team that had gone 5-6 after a 7-2 start sent a message that, like Boyle, it will have to be reckoned with in the coming postseason.

“We wanted to come out and show that we can play with the best team in the region,” Hayden said. “We’re here, too. There’s another team in this county to be aware of.”

Players on both sides hit big shots in the first overtime game between the crosstown rivals in nine seasons, and both teams had stretches of torrid shooting. However, the deciding factor might have been the missed shots, or more specifically who grabbed more of them off the boards.

The rebounding margin swung dramatically from the teams’ Feb. 23 meeting, when Boyle outrebounded Danville 52-27 in an 80-56 victory, to Saturday, when the Admirals outrebounded the Rebels 44-31.

“That’s the game. That’s it,” Danville coach Ed McKinney said. “If you outrebound, you’re going to win, because they get a lot of their stuff on the offensive glass.”

Boyle had 23 offensive rebounds in the first meeting but only 11 in the rematch.

“We came in more physical,” said Danville center Ethan Wood, who had 12 rebounds. “You’ve got to be ready to go at it.”

Boyle coach Dennie Webb said the Rebels weren’t as ready as they should have been, and he took responsibility for that.

“Danville was a step quicker to things today. They were getting every 50-50 ball, they were getting those rebounds. They just deserved to win, we got outplayed and outcoached,” Webb said. “I think we just thought we were going to roll in here and beat them like we did the first time. And we tried to tell them that doesn’t happen in Danville-Boyle games. It’s always a scrap.”

Luke Sheperson had 12 points and a team-high 12 rebounds.

There were eight ties and four lead changes — all of them after the start of the fourth quarter — before Danville (13-8, 6-2 45th District) scored the final five points of the day.

Jarius Bryant’s layup with 43 seconds left in the second overtime put the Admirals on top for good at 79-77.

Imfeld, who went 6 for 13 from 3-point range and forced overtime by burying a 3 with two seconds left in the fourth quarter, missed a 3 after Bryant’s basket. Danville then closed out the game at the free throw line.

Danville used only five players for most of the game. The Admirals’ starters played all but six of the 200 individual minutes, and four of those minutes came after Jalen Dunn fouled out in the final second of the first overtime. Hayden and Bryant played all 40 minutes, while Ford played all but 10 seconds.

The Admirals’ bench is young and not very deep, and McKinney said he kept rolling with experienced players for whom things were going well for much of the first half.

“I thought all five guys were playing well, so when you get up 20-10, you don’t want to break the momentum,” he said.

Danville also played a zone defense for much of the day.

“It’s just a little less taxing, not getting through all their physicality and screening, and we weren’t up the floor pressing,” McKinney said. “And we rebounded out of the zone pretty well.”

Dunn had nine rebounds, Hayden had eight — along with six assists — and Bryant had five for Danville.

“A big focus was getting stops,” Hayden said. “They obviously have the best team in the region so far, so we wanted to come out and get stops on them. We know they like to just beat people up inside and get easy buckets, and we wanted to … get stops.”

Hayden scored the Admirals’ first eight points as they raced to an 8-2 lead. They were up 15-5 later in the first quarter and 32-17 late in the second before the Rebels pulled to within 34-24 at halftime.

Boyle continued to whittle the margin in the third quarter, then took its first lead at 44-43 at the start of the fourth on consecutive buckets by Gillis that were part of a 12-0 run. The Rebels’ largest lead was three points, and their last lead was at 61-59 early in the first overtime.

Gillis hit two free throws with .5 seconds left to force a second overtime. Ford got back-to-back layups for Danville at the start of the final period, after which Imfeld hit two 3s for Boyle to tie the game at 76-all.
Danville was 7 for 9 from the field in overtime and shot 52 percent overall from the field and 46 percent (6 for 13) from 3-point range. Boyle shot just 29 percent in the first half but 57 percent in the second and finished at 41 percent overall and 42 percent (10 for 24) from 3-point range.

This was the first Danville-Boyle game to go to overtime since the Admirals beat the Rebels 50-42 on Jan. 6, 2012.

Boyle still has the region’s best record, but Webb said this game shows that the Rebels still have work to do.

“Hopefully we’ll bounce back and learn from it. We’ll see what they did to us … and try to get better,” he said.

“We’ve still got a lot in front of us, we’ve got a lot we want to accomplish, but this is definitely a setback for us.”

The teams could meet again in the 45th District Tournament — Boyle had a chance to clinch the No. 1 seed with a win — but Wood said if this is the last time he and his fellow Danville seniors face the Rebels, it’s a good way to go out.

Out of action
The Boyle County girls were forced to suspend activity due to COVID-19 protocols, likely as a result of a positive test within the program.

The Lady Rebels canceled games against Garrard County, Danville, Danville Christian and Casey County that were scheduled between Thursday and Tuesday.

The only remaining game on their regular-season schedule is Friday at Sayre.