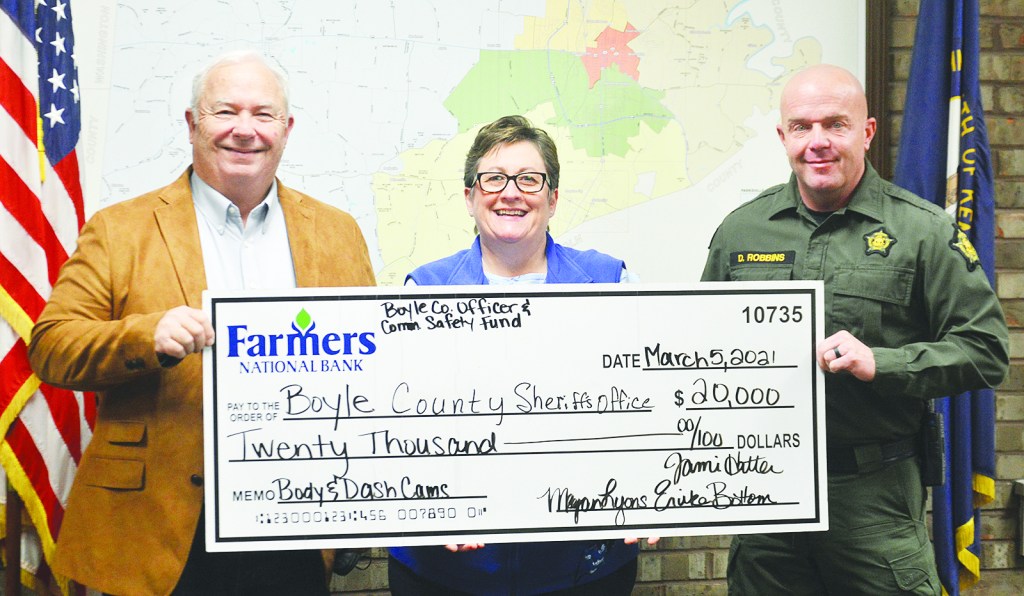 Boyle County Judge Executive Howard Hunt, left and Sheriff Derek Robbins stand with Lisa Bottom who was presenting a check for $20,000 to the county from the Boyle County Officer & Community Safety Fund to help purchas body and dash cameras. Photo by Robin Hart

The Boyle County Sheriff’s Office received a $20,000 donation on Friday from a group formed by three officers’ wives to help purchase body and dash cameras for local law enforcement officers. 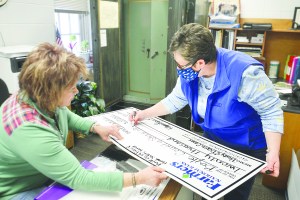 Boyle County Sheriff’s Office manager Janice Spears, left, holds the giant check while Lisa Bottom fills it out for a special presentation to the Sheriff’s Office and fiscal court on Friday. Photo by Robin Hart

Last June the Boyle County Officer and Community Safety Fund was set up at Farmers National Bank by Erika Bottom and Kyle Lyons, whose husbands are officers with the BCSO, and Jamie Hatter, whose husband is the Perryville Police Chief. Their goal was to raise $30,000 through public donations.

Friday’s donation to the BCSO finished up their goal.

Sheriff Derek Robbins said had it not been for the COVID-19 pandemic and the federal CARES money (Coronavirus Aid, Relief and Economic Security) his office received, it could have been a least a couple more years before they could have afforded the purchase of 17 dashboard and body cameras for his officers. 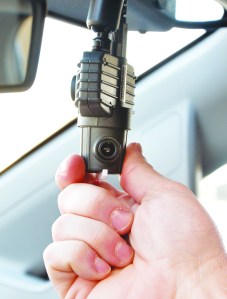 The total price tag for the cameras is about $232,000 for equipment. The $20,000 donation will be spent on the infrastructure of servers and computers that will keep track of and store the videos that each officer records, Robbins said.

The dash and body cameras are being installed now and the project should be concluded in about two months, he added.

The sheriff’s office dash and body cameras are the same ones that the Danville Police Department is using, Robbins said.

Lisa Bottom, who represented Farmers National Bank, presented the over-sized check to Boyle Judge Executive Howard Hunt and Robbins, said many individuals and business from across the county, state and even the country donated to the fund. The largest donation came from a business, that wants to remain anonymous, for $10,000, she said.

“They want to see everybody safe and keep everybody on the up and up.”

Hunt said, “This is the best opportunity to tell the truth. The dash and body cams are an unbiased observer. Video doesn’t lie. What ever it is, it is.”

Beshear says 25% of state’s adults have been vaccinated