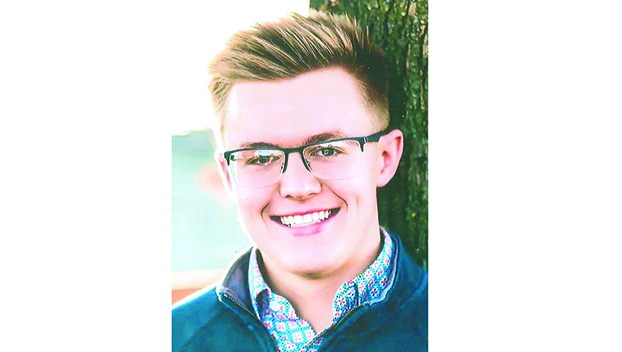 Campbell Blaine Coyle, a senior at Boyle County High School, has been awarded the 2020 National Society of the Daughters of the American Revolution (DAR), St. Asaph Chapter, local scholarship.

In spite of the pandemic, Campbell turned in a resumé of activities which showed his outstanding contribution to his school and community.

Much of Campbell’s time is spent breeding, caring for, and showing his lambs and sheep. Over the years he has shown his sheep at several county, state, and national shows.

This, he says, involves selecting the lambs to be shown, breaking them to lead, and working with them on a daily basis. He is also involved in birthing, vaccinations, newborn care, record keeping, and individual exercise and feeding programs. His efforts have provided several grand champions.

His work with rabbits has led him to mentoring children, who in turn, exhibit their rabbits. He sells his rabbits to other breeders on his Facebook page, Quirks Run Rabbitry.

At Boyle County High School, he is involved with FFA (Future Farmers of America), working not only with sheep and rabbits but with the annual plant sale and landscaping at a local retirement home.

Campbell is also a swimmer at Boyle County and the Commonwealth USA Swim Team, a YMCA team.

He is an active member of Indian Hills Christian Church, where he works with the children’s church. Campbell’s parents are Douglas and Elizabeth Coyle of Quirks Run Road.

Campbell’s application has been sent to the Kentucky Society Daughters of the American Revolution to compete with applications from all over the state. St. Asaph’s DAR Chapter has given him a monetary award to help with his college expenses.

Because of the pandemic, Judy Sieweke, Chapter Regent, says that the annual February Awards Luncheon was not be held this year.