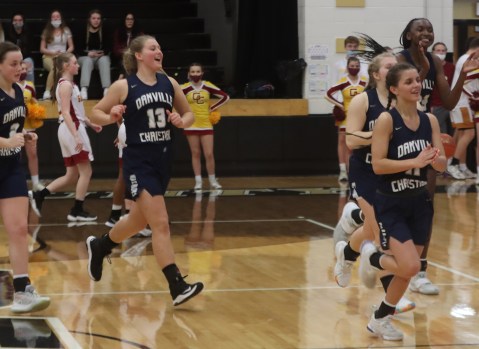 Danville Christian players celebrate as time expires in their win over Garrard County on Saturday in the first round of the 45th District Tournament. - Photo by Mike Marsee 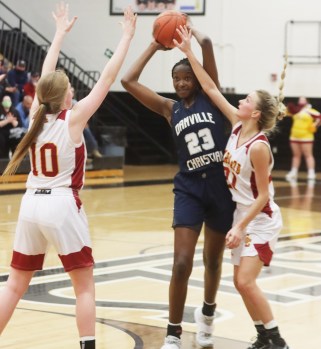 Grace Mbugua of Danville Christian tries to pass the ball while being double-teamed by Garrard County’s Hallie Martin (10) and Morgan Day during the third quarter Saturday. - Photo by Mike Marsee 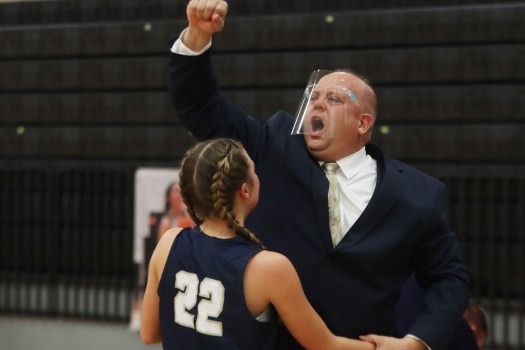 Danville Christian coach Billy Inmon gestures toward the Lady Warriors’ fans as he hugs Victoria Inmon during their celebration following DCA’s win over Garrard County on Saturday in the first round of the 45th District Tournament. - Photo by Mike Marsee 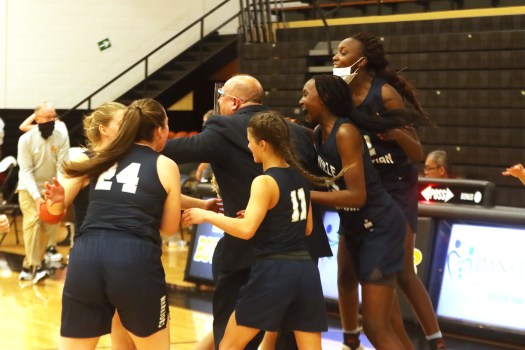 Danville Christian players celebrate with coach Billy Inmon following DCA’s win over Garrard County on Saturday in the first round of the 45th District Tournament. - Photo by Mike Marsee 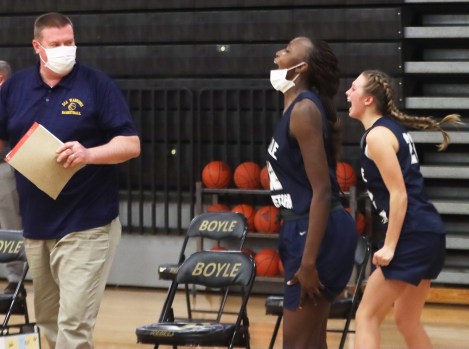 Ruth Mbugua, Victoria Inmon and Rheagan McKnight, left to right, begin to celebrate on the Danville Christian bench as assistant coach Jonathan Meyer during the closing moments of DCA’s win over Garrard County on Saturday in the first round of the 45th District Tournament. - Photo by Mike Marsee 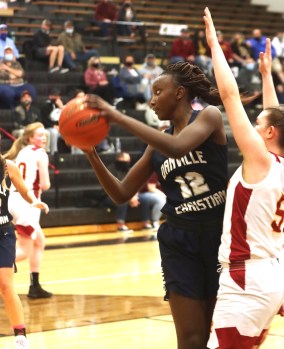 Ruth Mbugua of Danville Christian looks for a teammate after securing a rebound as Garrard County’s Jade Pevley guards her during the second quarter Saturday. - Photo by Mike Marsee 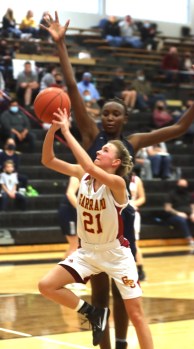 Ruth Mbugua of Danville Christian moves in to block a shot by Garrard County’s Morgan Day during the second quarter Saturday. - Photo by Mike Marsee

Danville Christian players celebrate with coach Billy Inmon following DCA’s win over Garrard County on Saturday in the first round of the 45th District Tournament. - Photo by Mike Marsee 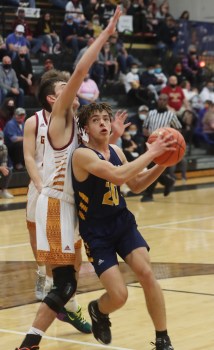 Luke Imfeld of Danville Christian goes up for a shot against Garrard County defender Chase Burkhart during the third quarter Saturday. - Photo by Mike Marsee 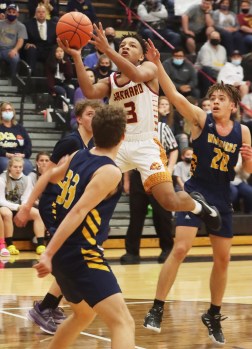 Montavian Quisenberry of Garrard County goes up for a shot in the lane during the second quarter Saturday. - Photo by Mike Marsee 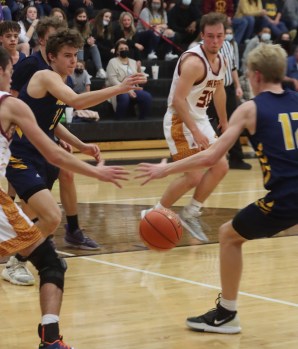 It was coming sooner or later, the day when DCA would make its mark in the 45th District. And Saturday was the day.

The Lady Warriors achieved what was arguably their biggest victory and certainly their most visible victory to date, a 57-46 win over Garrard County in the first round of the 45th District Tournament.

It was the first victory in a KHSAA postseason tournament not only for their program, but for any DCA team sport, and it was a significant accomplishment for DCA players past, present and future.

“This is much bigger than just for the girls,” DCA coach Billy Inmon said. “I told them this was a huge step for the mission of DCA tonight. We got down on our knees and thanked God for the victory — and we would be thanking him even if we lost — but we were very thankful that they got to experience that and they were able to be that team that did make history for the school.”

The Lady Warriors outscored Garrard 31-12 over about 13 minutes of the second half to turn a 28-19 halftime deficit into a 50-40 lead with 2:52 remaining to win the first game of a doubleheader at Boyle County between the fourth- and fifth-seeded teams in the five-team boys and girls tournaments.

The Garrard boys defeated DCA 60-52 in the nightcap.

Regional tournament berths will be on the line when play resumes Monday night with the boys semifinals: Boyle County vs. Garrard and Danville vs. Lincoln County. The girls semifinals will follow Tuesday: Danville vs. DCA and Boyle vs. Lincoln.
DCA, which first enrolled high school students in 2006 and joined the KHSAA in 2017, is the smallest school in the KHSAA with a girls basketball team. It played in the district basketball tournament for the first time a year ago and played a round-robin district schedule for the first time this season.

No. 5 seed DCA (7-9) got one district win during the regular-season, beating Boyle County in late February. That win was cause for celebration, but this one was even bigger.

“First, I want to give God the glory and praise God, and we’re happy to be able to start that path for DCA,” forward Maggie Bentley said. “Hopefully we can push forward and keep going, and other teams that come behind us won’t have as much pressure to get that first district win.”

They were also happy to share their success with those who came before them. Inmon said he got three calls from former players while the team was celebrating in its locker room in the moments after the game.

Rebounding was critical to DCA’s success. It outrebounded Garrard 44-31 and got 19 offensive rebounds.

At 6-4, the Mbuguas were both six inches taller than anyone else on the floor and got their share of rebounds. However, Inmon said those who weren’t as tall came up big on the glass as well.

“Our guards had not been rebounding most of the season, and I felt like our guards did a better job of blocking out tonight and battling for balls,” he said. “We relied too much (previously) on our two bigs, and tonight I don’t feel like we did that as much. I think they still got a lot of rebounds, but we prevented (Garrard’s) guards from getting more rebounds than they normally would have gotten.”

Grace Mbugua scored 14 points to lead DCA, followed by Ruth Mbugua with 12 points and Bentley with 11.

Tristen Himes scored six points and Victoria Inmon had five as DCA outscored Garrard 20-6 over the first nine minutes of the second half to take a 39-34 lead. Bentley and Grace Mbugua then scored four points each in an 11-2 run that stretched the margin from five points to 10.

“Our first objective was to glorify God with our efforts and our attitudes, and we just put it all out there,” Ruth Mbugua said. “I’m so proud of the girls. It took all of us to dig in and push through.”

The Lady Lions sank three straight 3s — two by Abney and one by Morgan Day — fueled a 12-0 run that gave them a 21-13 lead in the second quarter.

“It says something (about our defense), and it says something about the character of our girls,” Billy Inmon said. “We don’t have a lot of subs, and they really gutted it out, and all of them took personal responsibility … in making sure that we didn’t get beat with 3s.”

Inmon noted that DCA had played two close games against Garrard, losing the most recent meeting by six points after being up by five with 90 seconds left, but he wasn’t sure how the magnitude of Saturday’s game would affect his players.

“I knew we could play with them, but honestly, it was a pretty big moment for our school, so you just don’t know how kids are going to step up — or not. So I was just so proud of them,” he said.

Bentley said the Lady Warriors carried confidence into the game.

“You can’t come into a game expecting to lose,” she said. “You have to come in together. We just knew … if we left it all out there that’s all we could do, and we came out with a win.”

Boys
Garrard County 60, Danville Christian 52
Garrard had to work for its win even after building a big lead in the early going, but the Golden Lions got the job done after rebuilding a double-digit lead early in the fourth quarter.

“It’s district tournament time. You’re going to have this,” Garrard coach Brandon Cooper said. “Everything’s going to be a grind game. They’ve got a good team, their kids played hard, they hit shots. … For our kids to get a win, I’m happy at this point.”

Ethan Cooper hit three 3-point shots and scored 13 points in the first quarter, and he went on to lead Garrard with 23. Montavian Quisenberry scored eight points in the fourth quarter to finish with 12.

Quisenberry scored five points and Chase Burkhart scored four in the decisive 9-0 run, both of them driving to the basket to score and/or draw fouls.

“If (DCA is) hitting shots they’re going to be competitive, and luckily we were able to drive it at them a lot more and get some easy buckets there at the end,” Brandon Cooper said.
Titus Boyd led DCA with 16 points, followed by Noah Imfeld and Brenden Wright with 12 each. Boyd scored all of the Warriors’ points in the 8-0 run that pulled them within three early in the final period.