Teresa Shannon is a Goodwill SCSEP program participant who helps with recruitment of people and agencies for the program. - Photo by Olivia Mohr

After Teresa Shannon experienced several losses, including that of her mother, her home, and one of her legs, within a six-month time frame, she said she was “pretty well done.”

But, after she got an artificial leg, she joined the Goodwill Senior Community Service Employment Program, which has a Kentucky location and serves counties including Boyle. She heard about the program through a receptionist at a past job she held.

The SCSEP program is a training and employment program for people aged 55 or older to update their job skills and build work experience. It is for people who are not employed, have low to no income and who want to work in their communities and get paid to learn through on-the job training, according to Goodwill’s website.

Shannon’s first role through the program was at Community Action, where she worked for about a year doing receptionist work.

“My very first day, I went home and cried,” she said. “I finally felt like a person.”

Later, she said, “This program — it gave me a purpose.”

Now, Shannon is a program participant and also does recruiting for people and agencies and tries to get word out about the program, and she also is a Court Appointed Special Advocate in Hardin County.

The Goodwill program gets people working, building their resumes and job skills, at nonprofit organizations and government jobs, Shannon said. The program keeps people in roles typically about six months at a time, switching up where they are working so they practice diverse skills to build their resume. The program also consists of tutorials on resume writing, has a computer program and teaches other skills as well. The ultimate goal is to find a more permanent place for paid employment.

“The thing is with this program — we’re able to curtail what a person is doing around their abilities,” Shannon said, speaking from personal experience, as she is an amputee and can’t walk for very long, and she found roles where she could work based around her abilities.

She also said if someone is in low-income housing or on food assistance like food stamps, they can keep them even as they are earning money through the SCSEP program, as she was able to.

She said through her role with Community Action, she felt like she was helping people, and when later career coach Kimberly Culliton asked her to help with recruiting and said she was her first choice, Shannon said, “I was really honored when she asked me because like I said, I feel human again.”

There are currently five people in Boyle County working through the program, she said. But not a lot of people know about the program, so Shannon is helping get the word out.

“People my age — they just want to know they still belong,” she said.

Billie Wise was a Boyle County participant who now has found her place to work at Haven Care Center, a pregnancy resource center. 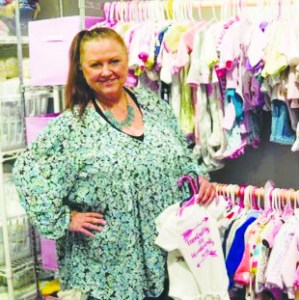 Wise had worked throughout her life but in 2003, she was no longer able to work after becoming disabled after getting injured on the job, facing depression and suffering the death of her daughter.

She watched a friend of hers, also in her ‘50s, get turned down for jobs, until she started the SCSEP program and made money through work training. Wise became involved with the program herself. When the pandemic hit, Wise said the program adapted by shifting some services online through resources like Zoom meetings and “homework” on professionalism on the job and interviewing.

Now, she works at Haven as a baby boutique coordinator.

“I love it here, and I’m so happy to be here,” she said. “And it never would have happened if I had not made that first call to Goodwill.”