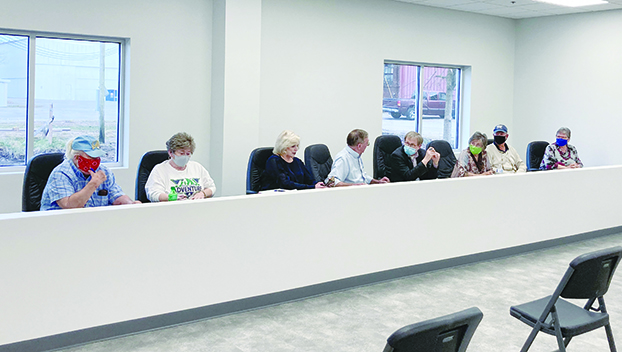 The Junction City council held its first meeting in the new city hall building Thursday evening. The Junction City Community Center, where the council had met for several years will be torn down soon. Photo by Robin Hart

The trend of converting storage sheds into “tiny homes” is becoming popular in Junction City, but they’re illegal.

At Junction City’s regular meeting Thursday night, Boyle County Planning and Zoning Director Steve Hunter said Mayor Jim Douglas contacted him about people bringing storage buildings to town and “are trying to use them as residences. You can’t turn these buildings that you’re buying at Lowe’s or wherever, into a dwelling,” without the proper building permits and inspections, Hunter said. And they must be located on property that’s zoned for single family dwellings.

“We have strict rules.”

Junction City’s new city hall, which will also house its fire and police departments, is near completion. Even though furniture hasn’t been moved in, the city council held its first meeting in the new building last Thursday evening. Photo by Robin Hart

Manufactured homes are single-wides, double-wides and triple-wide trailers and are HUD approved for dwellings, Hunter said. Storage sheds are not manufactured houses, he added, and have to be properly inspected before someone can move into one.

Under the older ordinance, “When you read it, it feels like it’s encouraging manufactured homes” just about anywhere, he said. “It talks about orienting it to the street, and skirting, but technically, none of those things are allowed under the new zoning ordinance in the city. … The new ordinance is stricter, which will protect the town. … Under the new ordinance, a manufactured home can only go in a mobile home park or one specific zoning district. The old ordinance was broad and they could go in multiple districts. People are truly confused.”

Even if the storage building is located in the right district and converted to a home, the owner would still need the proper building permits, meet building codes and be inspected by Rusty Cox, the county’s building inspector, Hunter said.

“What’s happening is they’re not going through either one of us (P&Z and building inspector).” People are also tapping into the sewer lines. So if the storage sheds being converted to housing and are not in the proper zoning district, like the ones on South Lucas Street, they’re in violation of both. “We’ve got to get on these a little more aggressively,” Hunter said.

“It’s a violation the minute they pull it on the property without a permit,” he said. Only storage sheds or buildings that are 200 square feet or smaller are exempt from a building permit. “Bringing in the storage unit and trying to make it a dwelling, you’re violating the zoning ordinance because it’s not a habitable dwelling.”

Douglas said the city’s first step will be to approve an ordinance repealing the old manufactured home ordinance. The first and second readings will take place tonight (Monday) and Tuesday night.

“We need to stop this now, because it’s already out of hand. It’s every week now, that we’re getting more and more. They’re up to seven or eight now,” Douglas said.

Hunter told the city council members that if they see more sheds or storage buildings being converted to tiny houses, report them to his office.

The second step will be for the city to create a five-member board to hear appeals from property owners who get cited for building code and zoning violations.

Douglas asked the members to submit names of people who would be interested in being on the board. “I’ve got six or seven that I know would be fair and they won’t be afraid to make their neighbors mad.” For example if Joe and John want to convert a storage building into a tiny home Douglas said he doesn’t want the board to say “it’s OK for Joe but not John. I don’t want that.”

In other news, Hunter said his office has received a lot of calls from residents of Shelby Green who are concerned about a building project at the entrance of their neighborhood on U.S. 127.

“There’s some dirt work happening, and we knew this was happening. A permit has been issued for 12 townhomes there. It is zoned multi-family, so they’re 100% legal,” Hunter said.

“Shelby Green is zoned single family, but the front corner is zoned multi-family and always has been.” He added that if the development is successful, more townhomes could be built on the other side of the street, too.