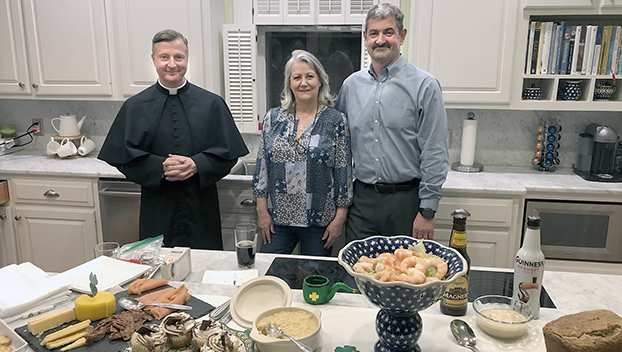 Father Anthony McLaughlin, left, with Karen and Andy Ryan in their kitchen where they prepared typical Irish foods like Irish Brown Bread, potted shrimp, smoked salmon, prawn cocktail with Marie Rose sauce and sharp Irish cheeses. The feast will be featured on Danville Sister Cities “Wee Bit of Ireland” video that will be featured on Wednesday to celebrate St. Patrick’s Day. Photo by Milton Reigleman

St. Patrick’s Day will be celebrated here and in other Kentucky Sister Cities, with the premiere of a special 30-minute video created by the Danville Sister Cities Commission. It features not only local Ireland fans, but Ireland natives as well.

“Each year on or around St. Patrick’s Day, Danvillians can get a small taste of Ireland at the Sister Cities’ station at the annual Rotary International Dinner. With that dinner being impossible to have this year, we thought we should give our supporters ‘a wee bit of Ireland in Danville,’ if only virtually,” explained Commission Chair Milton Reigleman.

“The idea for this video came up by some of the creative members of the Sister Cities Commission during a recent Zoom meeting. It was great fun filming it.”

The video, “A Wee Bit of Ireland,” features Danville’s Ss. Peter and Paul Catholic Church’s Father Anthony McLaughlin visiting three homes where the residents have unique ties to Ireland. Father McLaughlin grew up in Belfast in Northern Ireland, which is just a few miles from Carrickfergus, which has been Danville’s Sister City since 2008. 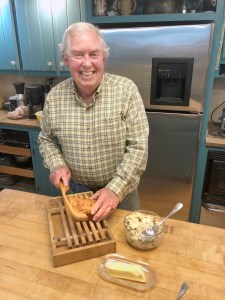 “We moved to Danville in June 2017, when my husband retired from the U.S. Air Force after serving 32 years. We actually had jobs lined up in Colorado after his retirement, but as we were passing through Kentucky we were amazed at how so much like Ireland it was so we decided to look for positions here instead.” Karen Ryan said. She is the assistant director for Centre College’s study abroad program and Andy Ryan is the CIO and ITS director for the college.

Karen Ryan said, “As we are an island we have a large bounty of seafood accessible to us in Ireland so I made some Irish Brown Bread (made with Odlum’s flour mix from Ireland) served with potted shrimp, along with some smoked salmon and prawn cocktail with Marie Rose sauce.

“We love to serve our seafood in Ireland with this sauce instead of cocktail sauce. I also had  some Irish cheeses (the sharper the better)! and Kerrygold Irish Butter. For us no other butter comes closer. For desert we made Baileys Irish Cream mini cheesecakes. For drinks we offered Guinness and Magners Irish Cider and of course some Irish Whiskeys.”

Next on the video Father McLaughlin visits with Dr. Russ Goodwin who shares Irish soda bread he makes, along with colcannon, which is an Irish staple, he said.

He and his wife and family have traveled to Ireland several times, and always enjoyed the traditional soda bread that was served. On one occasion, the soda bread was exceptionally good at the bed and breakfast where they were staying.

He recalled that he asked if they ever shared their recipe and the lady just started telling it to him as he scrambled to write it on a napkin. “It was two handfuls of this and one handful of that,” Goodwin said.

For the past four or five years, Goodwin has made and served this bread at the annual Rotary International dinner. He also makes colcannon, which is mashed potatoes with cabbage or kale and seasoned with salt and pepper.

The final stop on the video features Dr. Ray Hammond who discusses Irish whiskeys and how they’re vastly different than Kentucky bourbon and U.S. whiskeys. 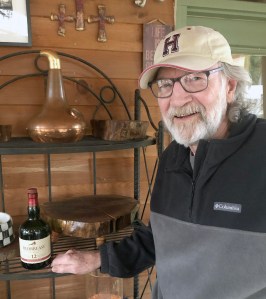 Ray Hammond, professor emeritus of biology and biochemistry, is also an expert in Irish wiskys and discusses the differences between them and Kentucky whiskeys in the upcoming “Wee Bit of Ireland” video. Photo by Milton Reigleman

On a trip to Scotland several years ago, Hammond discovered he liked Irish and Scottish whiskeys. He normally drank beer and wine, and even though he lived in Kentucky, which is known for its bourbon, he didn’t know much about the drink. He became more interested in Irish whiskey and studied the process of single malt whiskey for a year while on sabatical from Centre College, where he was a professor of biology and biochemistry.

“It’s light, not harsh. It’s the least harsh of all the whiskeys and it’s triple distilled. It’s also not smoky like Scottish whiskeys,” Hammond said.

Also, bourbon and whiskey are aged in new oak barrels.  After they’re used, the distilleries either cut them in half and sell them as planters, or they’re shipped to Ireland and Scottland and are used to age their whiskeys. “All Irish and Scottish whiskeys are aged with just a touch of bourbon,” he said.

In the video, Hammond discusses other aspects that make Irish whiskey different from Kentucky bourbon. He also discusses the history, culture and economics of the industry in Ireland.

Reigleman noted that the Irish spell the word “whiskey” without the letter e.

“A Wee Bit of Ireland” isn’t scripted. It’s just casual conversations and discussions about Ireland and the foods that the hosts served, Reigleman said.

Todd Sheene, who happens to be the event and video production coordinator for Centre, filmed and produced the video for the Danville Sister Cities Commission. “He’s a long-time Sister Cities supporter,” Reigleman said.

The “Wee Bit of Ireland” can be watched on the Kentucky Sister Cities Facebook page beginning on Wednesday.

The Commission has sponsored many exchanges of musicians, artists, and “citizen ambassadors” between Danville and Carrickfergus. By partnering with Pioneer Playhouse, the Norton Center, local restaurants, the Art Center of the Bluegrass, the Danville/Boyle County Public Library, and West T. Hill Community Theater the Commission has held a week-long Irish festival and many evenings of Irish music and dance, organized three trips to Ireland, and created summer programs reaching hundreds of students.

Since 2007, the major source of funding for the Danville Sister Cities Commission has been the City of Danville. However, this year with the unparalleled pandemic needs, Danville could grant only the Commission $300.

In a letter recently sent to potential supports, it reads, “But the generous support from our Sponsors ($50) and Benefactors ($100) has grown steadily, and with your support we will be able to continue and expand our programs during 2021.

To support the Commission and its work you may send a check made out to Danville Sister Cities, to Sister Cities, 60 Mapletree Place, Danville KY 40422. Unless you prefer to remain anonymous, your name will be listed on all 2021 Sister Cities programs.

He added, “Our group has invited William and Kate, Baron and Baroness of Carrickfergus, to visit their sister realm. Their secretary wrote back that the royal couple would seriously consider visiting on their first extended trip to the States.”