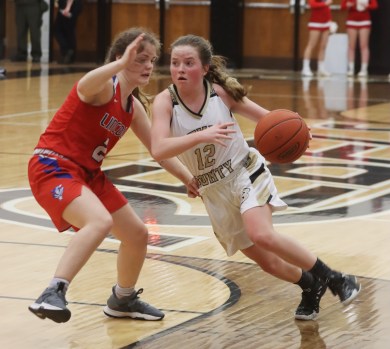 Zoey Robbins of Boyle County moves toward the lane as Lincoln County’s Katie Carmicle-Shields defends her during the third quarter Tuesday. - Photo by Mike Marsee 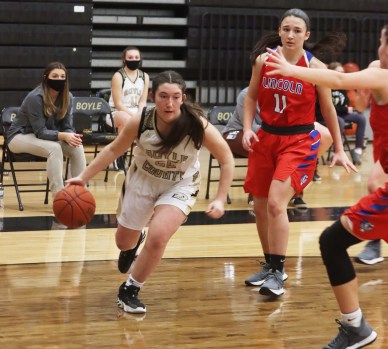 Andy Glasscock of Boyle County drives along the baseline after getting past Lincoln County’s Hallie Mullins (11) during the third quarter Tuesday. - Photo by Mike Marsee 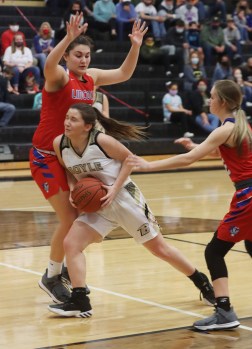 Emily Glasscock of Boyle County tries to get to the basket as Lincoln County’s Emily Estes, left, blocks her path during the second quarter Tuesday. - Photo by Mike Marsee 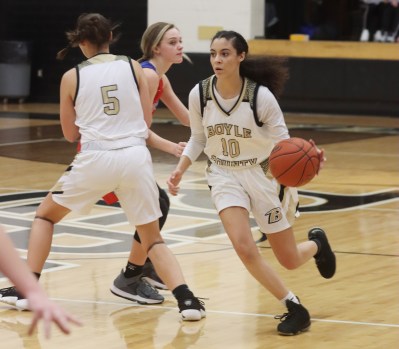 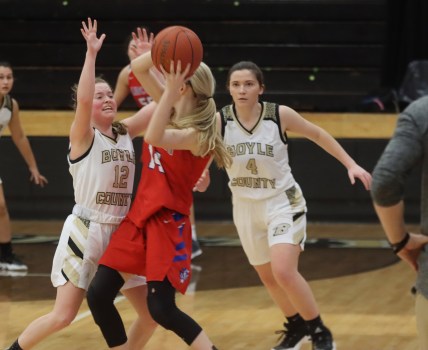 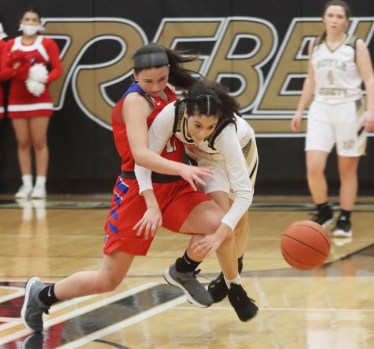 Hallie Mullins, left, of Lincoln County and Payton Bugg of Boyle County collide as they pursue a loose ball during the third quarter Tuesday. - Photo by Mike Marsee 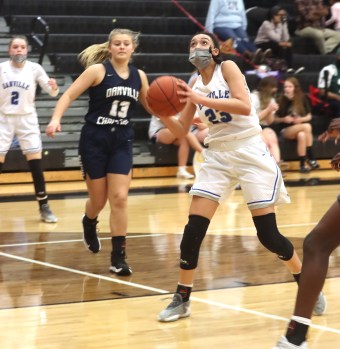 Desiree Tandy of Danville goes up for a shot in the lane during the second quarter Tuesday. - Photo by Mike Marsee 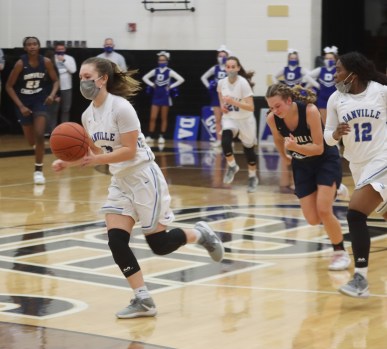 Samantha Bottom of Danville leads a fast break as she heads for the basket during the second quarter Tuesday. - Photo by Mike Marsee 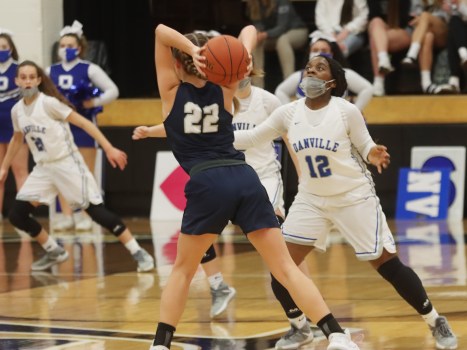 Lara Akers of Danville drives for a layup during the second quarter Tuesday. Akers scored 17 points of her 20 points in the first half. - Photo by Mike Marsee

It’s impossible to say that Boyle County “wanted it more” than Lincoln County, but it’s also impossible to overstate just how much the Lady Rebels wanted this win.

It was evident in overtime Tuesday night, when the Boyle girls dug in to defeat Lincoln County in the semifinals of the 45th District Tournament.

They made a multitude of mistakes along the way, but when push came to shove they made the plays that made the difference in a 44-42 victory.

“That’s tournament basketball: You do anything it takes to win,” Boyle coach Ryan Wiersma said. “Our girls showed a ton of grit.”

The Lady Rebels earned a berth in the 12th Region Tournament for the first time in three seasons and advanced to Thursday’s championship game.

Their opponent Thursday will be Danville, which defeated Danville Christian 62-31 in Tuesday’s first semifinal.

No. 2 seed Boyle (11-5) had not played since March 2 after a COVID-19 quarantine prompted the cancellation of four late-season games, though it had returned to practice almost a week ago.

The Lady Rebels won even after squandering a 12-point lead in the first half and even after third-seeded Lincoln (9-15) scored four points in the final 10 seconds of regulation to tie the game.

In overtime, Boyle made hustle plays to prevail in a clash between two of the youngest teams in the 12th Region — they have only three upperclassmen between them — outrebounding Lincoln 8-3, forcing three held-ball calls and disrupting the Lady Patriots’ outside shooters.

“We did a great job contesting their 3s,” Wiersma said. “When they drove, we gave a little bit more strong-side help and then closed out on some shooters, and then we went and got the rebound.”

Lincoln was just 2 for 7 and Boyle was 1 for 6 from the field in the extra period, but Emily Glasscock made four of six free throws in the final 2:18 for the Lady Rebels after they had gone 8 for 20 at the line to that point.

Eighth-grader Kennedy Bugg scored on a layup after a Lincoln player attempted to save a rebound, giving Boyle a 41-39 lead with 1:15 remaining.

Freshman Annabelle Tarter then forced two held-ball calls, and Glasscock, the team’s only senior, hit one of two free throws at :19 and two more at :08 to make it 44-40.

Chloe Ralston scored for Lincoln with one second left, but the Lady Patriots could not stop the clock or the Lady Rebels’ celebration.

Boyle, which had beaten Lincoln 30-18 in the teams’ only regular-season meeting, led 36-30 with 1:05 left in regulation. But the Lady Rebels missed four of six free throws in the final 36 seconds to leave the door open for the Lady Patriots.

Eighth-grader Alexia Baldock sliced through the lane for a layup that pulled Lincoln within 38-36. After Elly Sims rebounded a missed free throw on the other end at :07, Baldock did it again to tie the game with two seconds left.

“(She’s) a very, very good guard, very quick, so we had to give a little bit when she drove the paint,” Wiersma said.

While the Lady Rebels were losing their lead, they also lost their leading scorer, Payton Bugg, to fouls in the closing seconds of regulation. But Wiersma said they didn’t lose their cool.

“Payton did a great job throughout the game of controlling the tempo, and when we didn’t have her in overtime, we didn’t lose our temperament,” the Boyle coach said. “That was huge for us. We stayed calm. We lost the lead, but we never lost who we were in this game.”

Tarter scored five points and Coffey and Payton Bugg had four each to stake Boyle to a 17-5 lead early in the second quarter.

Lincoln roared to life with 12 straight points, including five by Katie Carmicle-Shields, tying the game at 17-all with 2:51 left in the first half. While Boyle went 1 for 8 from the field in the third quarter, the Lady Patriots scored six of the final nine points in the period, taking a 30-26 lead on a steal and layup by Baldock at :31.

Wiersma said despite their youth, the Lady Rebels were not shaken when things weren’t going their way.

“We’re a young team, but they played for each other,” he said. “They’re a tight-knit group; they don’t want to let each other down. … So they don’t worry about the bad things that happened. They focus on the positive things, and they did a great job of that.”

Ralston led Lincoln with 16 points, and Baldock finished with 10.

Danville 61, Danville Christian 32
The Lady Admirals left nothing to chance.

With one-third of its roster missing and with its opponent coming off a milestone victory three days earlier, coach Judie Mason wanted Danville to remove any risk of an upset.

“I told them, ‘We’ve got to bury them early because it’s district tournament time,’” Mason said. “You get it close, and you never know. I told them I didn’t want it to be close. I wanted them to come out ready to play, and they did.”

Pressure defense led to steals and steals led to transition baskets as the Lady Admirals’ lead ballooned. Nine of the 11 baskets in their 24-0 run were layups, and six of those came off turnovers or otherwise in transition.

Mason said that was the result of the work they had done in the 11 days since their last game.

Lara Akers scored 12 of her game-high 20 points during the opening run, and she had four 3-point goals and 17 points in the first half.

On the other end, DCA missed its first 13 shots from the field and had 11 turnovers before Ruth Mbugua knocked down a 3 for the Lady Warriors’ first points with 6:09 left in the first half.

Camryn Preston had 11 points and Desiree Tandy had 10 for Danville, which had only eight of its 12 players in uniform — the same number as DCA.