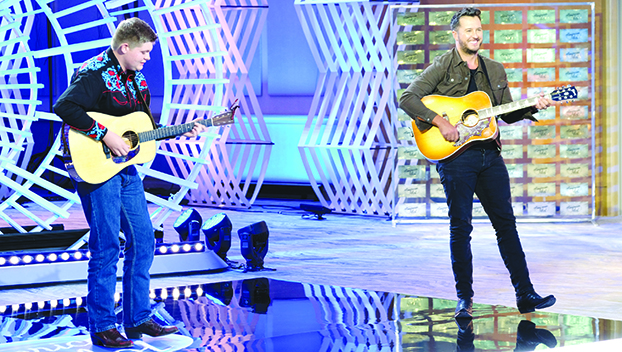 After Alex Miller, a 17-year old from Lancaster, sang an original country song about his ex-girlfriend with a smooth twang on the American Idol audition stage, he said he didn’t expect celebrity judge Luke Bryan to ask to sing a song with him.

So Bryan hopped on the stage with Miller after his audition to sing with him, both strumming their guitars, and he told Miller he could probably “make a call” to the Grand Ole Opry.

“Your personality is just infectious, man,” celebrity judge Lionel Richie told Miller, and he got his golden ticket to Hollywood.

Miller will be on American Idol’s kickoff episode of Hollywood Week, which airs March 21 at 8 p.m. on ABC. 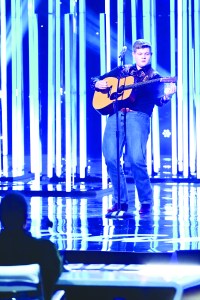 Alex Miller is pictured during the genre challenge of Americna Idol’s Hollywood Week. The episode he is featured in airs March 21. – ABC/Eric McCandless

He said when he first performed for the judges, he kept in mind “at the end of the day, they’re all people just like you and me, and I went into the audition with that mindset and treated them like I’d treat anybody else back home, with the honesty, and I was myself, too.”

Miller began singing at church at the age of 3. One of the earliest songs he remembers singing is Josh Turner’s “Long Black Train.” At 6, he began taking guitar lessons, and at around 7 or 8 he remembers playing at shows. Writing his own songs came later, between around fourth to sixth grade. He’s always been particularly attracted to traditional country music, but he said he likes all kinds of music.

When it comes to songwriting, for him inspiration can strike at any time, and, “When that song comes, you’ve got to be ready for it.” He types notes with lyrics on his phone and creates video clips when he has ideas out of the blue. He’s even resorted to writing songs on paper napkins and plates.

“I like writing it out on paper because I can see it and visualize it and get an idea for it better on there for some reason,” he said about his preferred method.

He draws inspiration from lots of things, but most of his songs tend to be “about bad relationships.”

He also doesn’t just play the guitar, but also the ukulele, steel guitar, banjo, and a bit of bass.

And he also farms on his grandfather’s cattle farm. His agricultural background began around the same time as his musical background, he said.

“My first word was ‘tractor,’” he said with a laugh. “It wasn’t ‘mom’ or ‘dad.’ They took a backseat to the old Massey Ferguson.”

Miller is part of FFA and is a Bluegrass regional sentinel for Lancaster and other areas in the region including Boyle County. His FFA chapter president is close friends with another Kentucky American Idol hopeful, Perryville’s Alyssa Wray. He said he had also met Wray in the past when she played basketball, not knowing yet that she sang.

“And when I heard her sing I thought ‘Oh my goodness, this is some real talent right here,’” he said.

He and Wray recently recorded a video of them singing “My Old Kentucky Home” together in Millennium Park while he played the guitar, and they posted it on social media.

“I would have dropped everything and done that,” he said. “She is such a nice person, and being able to be around other people who are also on the show and local is very nice, too. You have people you can relate to and get to go eat lunch with or something.”

Miller also knows Mount Vernon, Kentucky, American Idol hopeful Courtney Arnold, who he’s performed with before. He has also performed at the Perryville Jamboree, as well as several other venues.

“I loved the people in Perryville,”  he said. “They’re really nice people, and I’m very thankful for them letting me perform there, and I’m thankful for them letting me get up and sing, as always. Anywhere I play, I’m very thankful that they let me get up and do it. That’s what brings joy to me, and I hope it brings joy to the audience.”

“It’s a very toe-tapping tune, and I think people will really enjoy it,” he said.