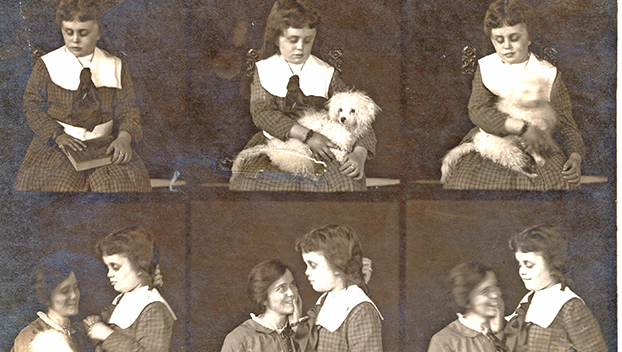 When Sophia Kindrick Alcorn was a teacher at Kentucky School for the Deaf from 1909-1920, she worked with a Deafblind child named Oma Simpson after she entered the school Nov. 7, 1910 at the age of 9. In working with her, Alcorn developed what was later called the Tadoma method along with her sister, named after Simpson and another of Alcorn’s later students.

This is a means of communication used by Deafblind people to comprehend a speaker’s words and learn to talk by feeling vibrations on the speaker’s throat and touching their lips and jawline. This method went on to be used internationally and is still in use by some people.

“It’s not just to talk but to understand,” said JoAnn Hamm, a Jacobs Hall Museum staff member at KSD. 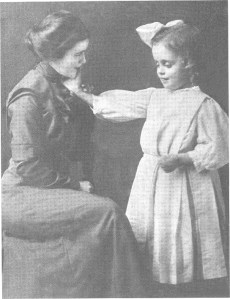 According to Simpson’s student information provided by KSD, Alcorn, who was from Stanford but had an apartment at KSD, “had wonderful success” with Simpson, teaching her a variety of subjects. Simpson learned to speak “so well as to be easily understood” and read lips by touching them with her fingers and holding a cylinder of paper in her hand into which words were spoken. She also was an “expert operator” on a typewriter, could weave rugs on a machine and perform many other skills.

Simpson was born July 9, 1901 in Ohio County, according to her student information. She became Deaf from scarlet fever at 2 years old, though was “not totally Deaf,” and she became blind at 6. The cause of her blindness was not given. Her parents were farmers who were not Deaf, but she had several siblings who were Deaf.

According to a volume of American Annals of the Deaf from September 1920, published by Gallaudet University Press, Simpson demonstrated lip-reading using the tactile sense with Alcorn at a “recent” (around the time the piece was published) Convention of American Instructors of the Deaf in Pennsylvania.

According to the piece, Simpson lip-read using six different methods, adjusting where she placed her hand for different methods or using a paper tube. The piece reads, “Her extraordinary sensitiveness to vibration, and her complete mastery of movement, as shown by her ability to understand whispered conversation, place the achievement of both Oma and her teacher as among the most remarkable in our profession.”

During Simpson’s short life — she died in New York in 1927 — she had quite a journey.

After the Kentucky legislature had appropriated funds for her education in 1910 and Alcorn was selected as her teacher, Simpson refused to stay at KSD. When she returned to school a few weeks later, Alcorn was again assigned as her teacher. Alcorn used finger spelling to teach her words like “doll.” She also began use of speech and speech reading early in Simpson’s education. Simpson’s first spoken word, “arm,” came after she had been in school three months.

According to the piece, “Oma’s voice in the beginning was so very poor that it was the opinion of experienced teachers of the Deaf that she could never be taught to talk.” But Simpon’s vocabulary grew and grew, and her speech became clearer.

The piece reads that Simpson had started out disinclined to learn and cried during “articulation period,” “But with infinite patience Miss Alcorn persevered,” and Simpson’s voice and speech became “as excellent as her lip-reading.”

By her tenth year in school, she was doing seventh or eighth grade work and had knowledge in various fields: geography, American history, a bit of arithmetic and a vocabulary of about 2,500 words, according to the piece. She also sewed, knitted, weaved and read Braille and New York Point, and had “a lively interest in current events.” The piece also noted Simpson’s sense of humor and appreciation for “all the good things of life.”

The piece called Simpson’s success a “joint accomplishment in the school-room” between Simpson and Alcorn.

Hamm said the Tadoma method is similar to Anne Sullivan’s method with Helen Keller but in a public Deaf school setting, not a private tutorial setting.

“She was doing what she was expected to do — be a teacher,” Hamm said about Alcorn.

Hamm said the pair traveled a lot together, demonstrating the method.

She said Simpson also went home with Alcorn on the weekends, as she was a ward of the school and her parents didn’t have the transportation to get to KSD.

According to KSD’s information provided by Hamm, Simpson left KSD in 1920 when her mother moved to New York. She was at a Deaf school there for a few months, but not much is known about her life after that. After she died in 1927, she was buried adjacent to Susquehanna County in Pennsylvania.

After Simpson left KSD, Alcorn went to work at South Dakota School for the Deaf in Sioux Falls, where she worked with a student named Tad Chapman, the Tadoma method’s other namesake, Hamm said. According to teacher information on Alcorn provided by KSD, Alcorn died on Nov. 28, 1967, in her home after having a stroke.