Danville’s Barbee House was constructed for Samuel Barbee in 1852 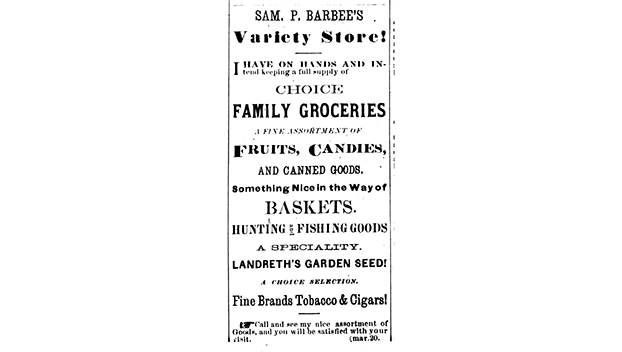 Samuel Porter Barbee of Danville was the 17th postmaster in the Danville post office and worked as an agent for the Louisville & Nashville Railroad. He was appointed as postmaster in April 1869.

He also was a local agent for 25 years of the Adams Express Company and owned and operated Sam P. Barbee Variety Store.

He and his family lived in the Barbee House which he had constructed in 1852, at 304 S. Fourth Street. The house is considered as one of the best examples of Greek Revival domestic structures built by early architect Robert Russell Jr. of Danville.

Known as Captain Samuel, he was well-known in the Grand Army circles. He enlisted and served in the Mexican War and

“When the Mexican War broke out he was one of the first to enlist from Kentucky and stayed in until the end of the war.” He was a sergeant in the Second Kentucky Regiment.

“Samuel fought in the Battle of Buena Vista, and took over as commander when his company captain was shot, finishing

gloriously,” according to an article in The Advocate-Messenger.

harness and leather ware. He also was a member and officer of the Lincoln Post. The family is recorded in the 1860 and 1870 Boyle County Census.

A native of Bourbon County, Samuel and his wife Mary 0. Harris, were married in October 1847 in Danville, according to

marriage bonds in Boyle County. The 1880 Census shows they were living in Denver, Colorado.

James W. and his wife, the former Mary Elizabeth Sandifer, had a daughter Helen Hallowell, Feb. 11,1888, according to the Denver Daily Republican. James was an express agent in Denver He also was a real estate broke and mining stocks.

William was listed as a clerk in the Danville post office in 1870.

Captain Lewis was a son of Joseph (1750-1790) and his second wife, Leannah Barbee of Fauquier, Virginia, and was

married three times before he died at the age of 50. He had three other sons and two daughters.

Lewis served in the First Regiment of the Kentucky volunteers in the War of 1812.

Samuel was born in 1825 and died in May 1896 in Denver, according to The Kentucky Advocate. He and his wife and son William are buried in Bellevue Cemetery.