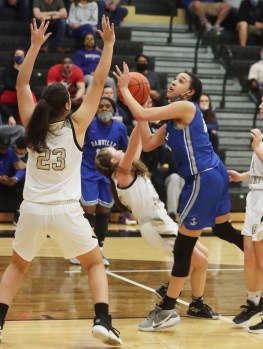 Desiree Tandy of Danville goes up for a shot in the lane as Boyle County’s Zoey Robbins draws contact during the third quarter Thursday. - Photo by Mike Marsee 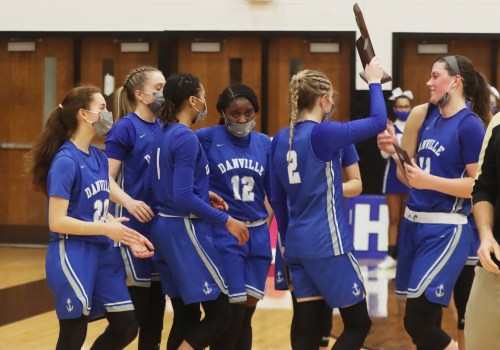 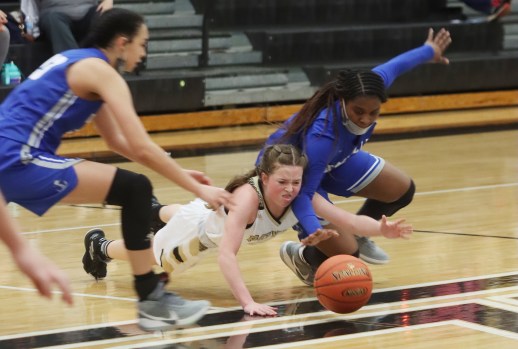 Zoey Robbins, center, of Boyle County and Tyliah Bradshaw, right, of Danville dive for a loose ball as Danville’s Desiree Tandy moves in during the third quarter Thursday. - Photo by Mike Marsee 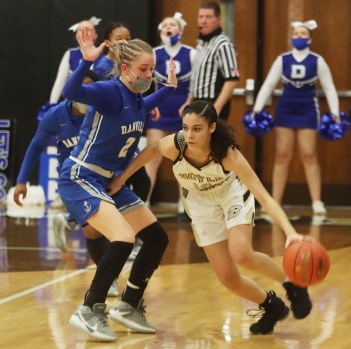 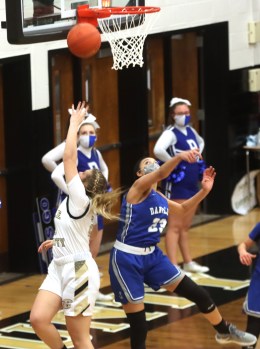 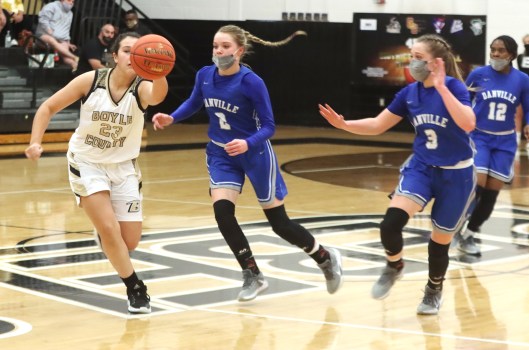 Braylee Leffew of Boyle County tries to secure a loose ball as Danville’s Lara Akers (2) and Jenna Akers (3) close in during the first quarter Thursday. - Photo by Mike Marsee 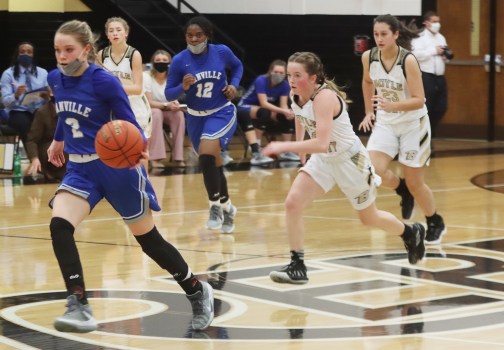 Lara Akers of Danville leads a fast break after getting a steal during the third quarter Tuesday. - Photo by Mike Marsee 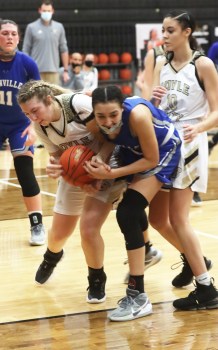 Ella Coffey, left, of Boyle County and Desiree Tandy of Danville fight for control of a rebound during the third quarter Tuesday. - Photo by Mike Marsee 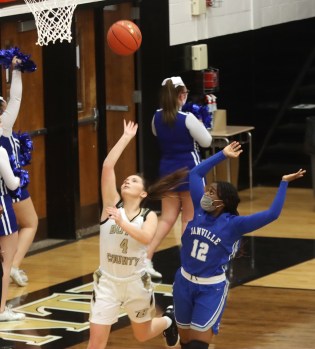 Emily Glasscock (4) of Boyle County gets past Danville’s Tyliah Bradshaw for a layup during the first quarter Thursday. - Photo by Mike Marsee 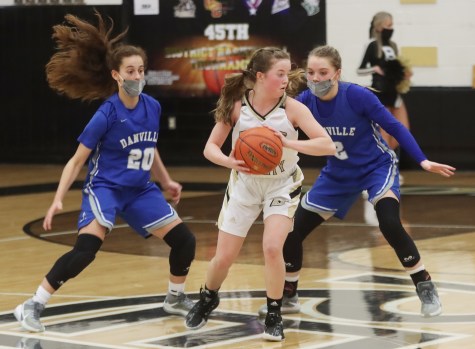 Zoey Robbins of Boyle County looks to pass as Danville’s Ahyana Burnett (20) and Lara Akers move in to trap her during the third quarter Thursday. - Photo by Mike Marsee

They got in, got their net, and got out.

With a short bench and an eye on the long game, the Danville girls didn’t want anything to trip them up during a district tournament in which they were heavily favored.

Things went pretty much according to plan, as the Lady Admirals defeated Boyle County 59-37 Thursday night to complete a trouble-free trip to their second consecutive 45th District championship.

There was no drama in either of the two 45th District Tournament games Danville won by a combined 53 points, but the Lady Admirals still took the time to savor their victory and to cut down one of the nets at Boyle for two reasons.

First, they were celebrating that they made it this far in a season threatened by the COVID-19 pandemic.

“In this crazy year, getting here, being safe, getting the opportunity to play and cutting the nets is really an awesome achievement for us,” Danville coach Judie Mason said.

Second, Mason reminded her players that championships shouldn’t be taken for granted in a program that has only three district titles and one regional title to its name.

“I said, ‘You all act like Danville girls basketball has always been good.’ What is this, our third district championship in a hundred years?” she said.

“They asked me if I wanted to cut the net, and I said, ‘Have you lost your minds? Of course I want to cut the nets?’ To me, cutting that net was important to my kids.”

Danville hasn’t always dominated this district, but it has over the past two seasons. This year the Lady Admirals won seven regular-season district games by an average of 39 points, so Mason thought motivation might be an issue this week.

Getting through was particularly important for a team that had only eight of its 12 players available for the second straight game.

“It’s very important,” Danville forward Camryn Preston said. “With eight people, you can’t foul. But if anything, we’re getting a lot closer, and we can push through those things. Those are barriers we can get through, just like COVID.”

Just as it had in its first-round win over Danville Christian, Danville (15-5) removed all doubt about the outcome of its game against Boyle (11-6) as quickly as possible.

The Lady Admirals scored the first 10 points of the game thanks in part to six Boyle turnovers, and virtually all of the 10 field goals they got while building a 25-10 lead over the first 13:07 came in transition.

Desiree Tandy, who scored 11 points in the first half for Danville, said the Lady Admirals have improved in the three weeks since a disappointing defeat in the All “A” Classic. They have won four of five games since their first-round loss to Bethlehem.

“We just put that behind us and have a new goal in mind,” Tandy said. “I think that our team has built a way stronger bond after All ‘A,’ and we’ve just all gotten on the same wavelength.”

Danville was sloppy at times against Boyle, but Mason said the Lady Admirals have gotten better in those three weeks.

“Tonight didn’t look like it, but … we’ve had our best practices, we’ve had our best games. It was like … after that we just said, ‘We’ve just got to quit feeling sorry for ourselves and play,’” she said. “Losing in the All ‘A,’ as bad as I hate to say it, probably helped motivate them for the last couple weeks.”

Tandy scored 17 points and Preston had 16 for Danville, which didn’t significantly extend its second-quarter lead until the fourth period but didn’t let Boyle get closer than 12 points.

“I think we moved the ball and shared the ball really well,” Preston said.

Boyle committed 16 turnovers in the first half and 23 in all, and coach Ryan Wiersma said the Lady Rebels were a tired team after being sidelined during a COVID-19 quarantine.

“Everybody’s tired in a district championship game, but that’s our second game coming off a week layoff, so it was a little bit different for us,” Wiersma said. “We’re still adjusting and trying to get our legs back, so some of those shots that we had, hopefully we get them to fall next week after we get a little more recovery and get back in the swing of the game.”

However, Wiersma said there was much to like about the way Boyle played,

“We executed the scouting report very well. We made a few little errors, and we can learn from those things. Our team was gritty, they didn’t get down. We got down early … and we fought back,” he said. “None of our girls have played in this game before, so once they figured it out and settled in we got comfortable.

“We figured it out as we went along and just got a little bit tired, a little bit gassed. And they did what they do, they take advantage of those few minutes that you play a little off.”

Danville led 35-18 after an 8-0 run that included consecutive layups by Preston, but Boyle played the Lady Admirals on even terms for the balance of the third quarter before hitting the wall in the fourth.
It’s definitely something to build on and something to be proud of,” Wiersma said. “I don’t think anybody would have picked us to be here (before the season).”

Kennedy Bugg led Boyle with 10 points off the bench, followed by Emily Glasscock with seven and Zoey Robbins with six.
Danville got eight points each from Lara Akers and Tyliah Bradshaw.