Hatching an idea: Middle school students get up close and personal with baby chicks 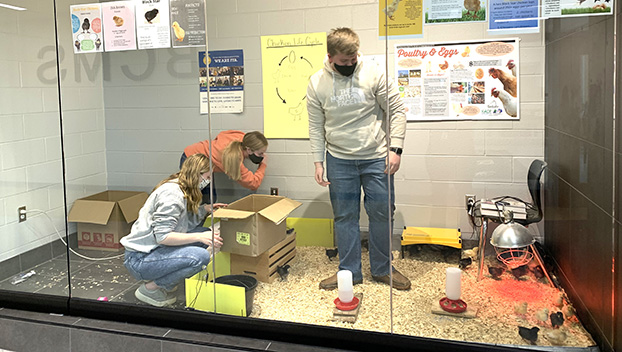 Baby chicks chirped and zoomed around on their little feet inside an enclosed space, a warm glow from a light source basking over their fluffy bodies.

These chicks were hatched and kept inside an “idea box” in Boyle County Middle School, a space inside the building with doors and glass walls, so students can get in and out, and so other students can peer inside at whatever may be in them — from projects to posters to, in this case, baby chicks.

Agriculture teacher MacKenzie Jones organized the chick project with her students. She bought the eggs from a hatchery in Pennsylvania with her own money, and as of Friday the school had 35 chicks. They got sex-linked chicks, so the students could tell what sex the chicks were from the color they were when they hatched.

Jones said the school chose to put the chicks in the idea boxes since due to the COVID-19 pandemic, teachers are rotating around classrooms with rolling carts, and students aren’t really able to see what’s going on in every classroom, so having a space for an incubator where everyone would be able to view it wasn’t quite possible. That’s where the idea boxes came into play, so every student in the school had the ability to see the chicks from the hallway.

The eggs hatched about two weeks ago. They were expected to hatch on a Monday, but they ended up hatching on a Sunday. Luckily, students were able to livestream the hatching on the Sunday prior. Jones said the eggs arrived during the ice storm, so they stayed at her house until everyone could return to school. Leading up to the hatching, the students monitored temperature and humidity, making adjustments as needed, and then they moved forward with incubation. 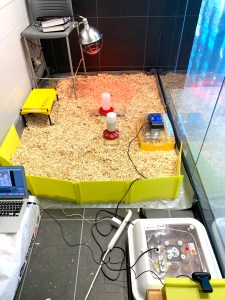 Eggs were stored in incubators inside the idea box before they hatched. – Photo submitted

Jones said one of the incubators is automatic and didn’t have to be turned, but with the other incubator, students had to hand-turn the eggs three to five times a day up until the days before they hatched. The students also were able to candle the eggs, meaning they placed a light source under the eggs to examine the development inside and determine the health of the eggs.

“For some of these students, it’s the first time that they’re able to see chicks hatch, or they had it in elementary school and they didn’t get to delve into all of it completely and remember some of it, so the big goal with this was kind of learning where your food comes from and actually getting to place their hands on an animal, actually have something hands-on here at school and experience something that they aren’t able to in some of their other classes,” Jones said.

Jones said one of the chicks was born with “almost a club foot,” so one of her classes made a splint for him to flatten out his foot.

“His name is Little Peep, and he runs around freely with everyone else. So they were able to fix his foot so he doesn’t limp or anything, and they’re very proud of themselves for that, so they got to name him,” she said with a laugh.

Now that the chicks are about two weeks old, they of course need a constant source of food and water, which the students provide. Students also clean out the idea box as needed to keep the space a healthy and clean environment for the chicks, and the chicks at this point in their development need a constant warm light source. Jones said they need a 95 to 100 degree heat range in at least one spot, with space to roam within the range of heat depending on their comfort. 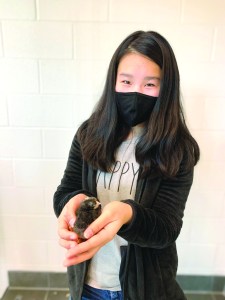 At this point, students are periodically pulling the chicks from their space to check on their development, watching as they go from donning their baby fluff to developing their adult feathers. Occasionally, a couple chicks have gotten loose, and students have had to chase them through the hallway, which Jones said has been amusing.

Jones said one exciting development is that this project has gotten some students interested in raising their own chickens.

“Several students are purchasing chickens from local places here around town and starting a backyard flock of their own, so that’s really exciting to see how they’ll move forward with their own little flock of chicks,” she said.

There has been a live ballot school-wide on names for the chicks. Students had a Google Form, where they were taking name suggestions. Jones said that there was also a photo shoot planned for the chicks to get a picture of every single one on which to attach names.

Jones said she planned to take the female chicks home with her to her family farm, and some of the males were planned to go home with staff members. She hopes the chicks will become a yearly or bi-annual project, and she said she’s looking at the possibility of the FFA having their own flock of chickens to lay eggs. She said the school is also hoping to get a therapy animal, pending liability and other paperwork.

For additional hands-on agricultural learning opportunities, she said the school plans to work with Boyle County High School in their greenhouse in the near future and will start some seedlings there to help with a high school greenhouse sale starting April 26.

The middle school also got a $2,000 grant to build a school raised-bed garden, where Jones said they plan to put the leftover plants from the greenhouse.

“And hopefully in future years we can have more small animals in our idea box display cases and more animals brought to school for students to be able to handle,” she said.