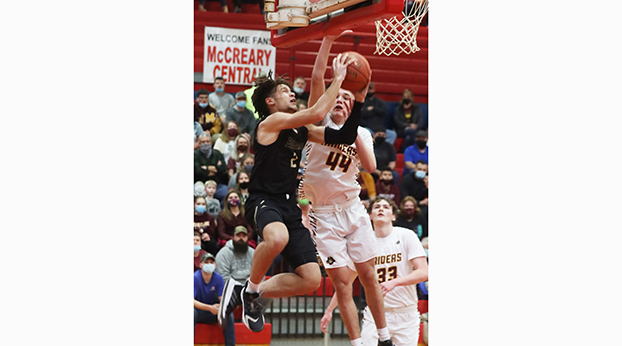 Noah Imfeld of Boyle County goes up for a shot against McCreary Central’s Kyle Stephens during the first quarter Saturday. - Photo by Mike Marsee 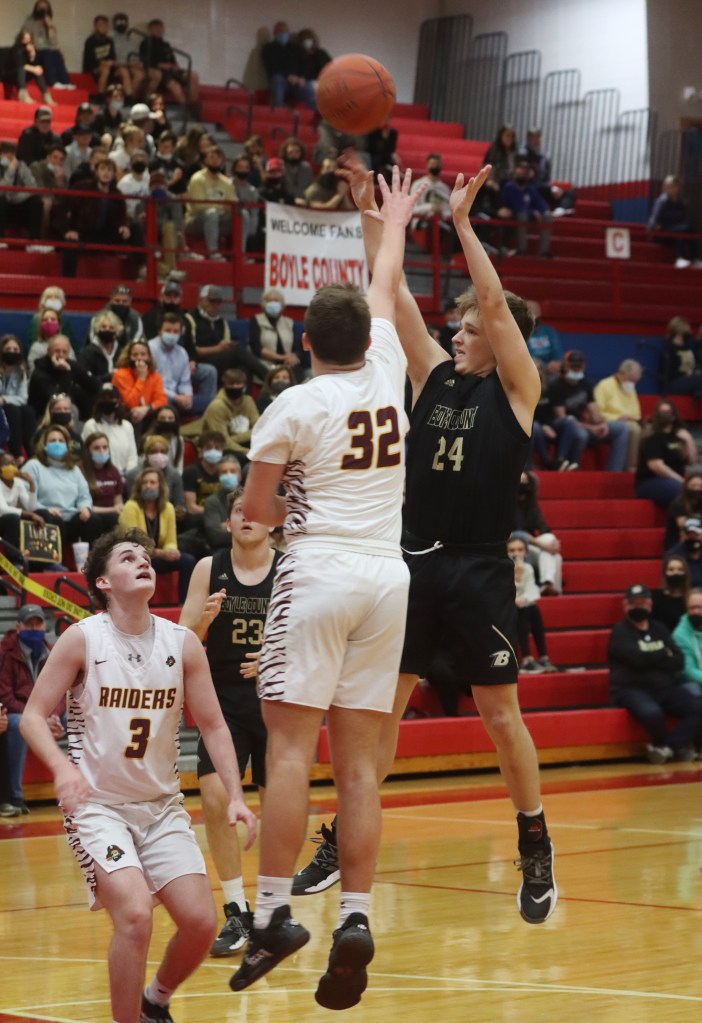 STANFORD — Boyle County might just make its mark on the regional tournament by leaving its mark on opponents.

The Rebels intend to be aggressive on defense, as they were when they were at their best Saturday night in their first-round victory in the boys’ 12th Region Tournament.

They distanced themselves from McCreary Central by getting all up in the Raiders’ faces in the first half Saturday night, using their defense to create chaos and pave the way for a 63-49 victory.

Boyle held McCreary to six points over the final 9:48 of the first half, opening a double-digit lead that would propel the Rebels into the semifinals for the first time in four years.

“We want people to know Boyle County basketball is a physical, mean team,” Boyle guard Jagger Gillis said. “We want to be aggressive, and we want every team to fear us.”

The Rebels advanced to a semifinal against East Jessamine at 7 p.m. Wednesday.

Boyle (19-4) brought the region’s best record to the tournament at Lincoln County, but the Rebels were smarting from a loss to Lincoln last week in the 45th District final.

“All week coach (Dennie) Webb’s been preaching about playing defense and playing it the right way, because last week we didn’t play our style of defense,” Boyle guard Jagger Gillis said. “We learned that we’ve just got to be more physical, we’ve got to want to win.”

The Rebels took about three minutes to settle in at the start of the game, after which they attacked just as Webb hoped they would.

“We tried to speed them up a little bit,” Webb said. “We got good play off the bench and kids came out and played hard and we flew around. That’s kind of what we missed in the games we’ve lost; we haven’t done that.”

McCreary (10-9) committed 10 turnovers and had 12 fewer field goal attempts in the first half. The Raiders’ last score of the first half came with 2:36 remaining.

“We started locking up and playing our game. That’s what we like to do,” Gillis said.

Noah Imfeld closed the first-quarter scoring with a 3-point goal that gave Boyle the lead for good at 15-13 and that was part of a 10-0 run. The Rebels closed the half with eight straight points, including five by Luke Sheperson, and got a buzzer-beating 3 from Imfeld to take a 31-19 lead into halftime.

McCreary cut the margin to eight points early in the second half, but that was as close as the Raiders got. Boyle scored seven in a row to take its largest lead at 51-32 in the opening seconds of the fourth quarter.

The Rebels won with balance on offense, with four players scoring in double figures. Gillis led the way with 17 points, followed by Imfeld and Sheperson with 12 each and Hagan Webb with 11.

“That’s the strength we have, if we can play that way and play together and get four or five guys in double figures,” Dennie Webb said.

And while aggression served the Rebels well on defense, Webb said they were better on offense because they weren’t as aggressive.

“In the Lincoln game, I think I probably got in their heads a little bit about wanting to be aggressive and attack the rim, and I think we passed up some shots,” he said. “Going into this one it was more take what the game gives you. If they give you that open jump shot, we’ll take it.”

Boyle shot 45 percent from the field and was 7 for 18 from 3-point range. Imfeld had five assists and Owen Barnes had three, and the Rebels had 13 assists in all on 21 field goals.

McCreary’s leading scorer, Kyle Stephens, got 10 of his 16 points in the final four minutes. He also blocked eight shots. 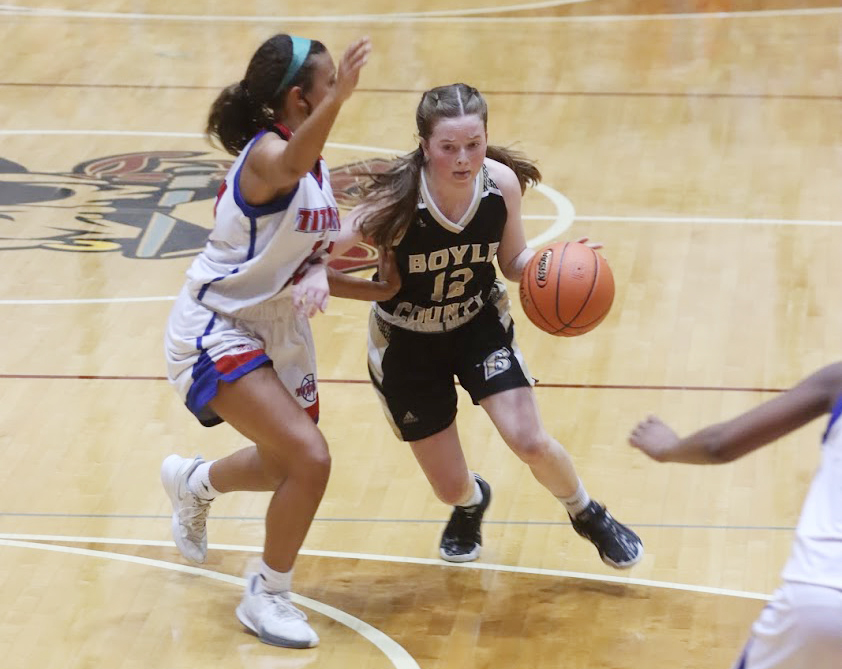 Lady Rebels fall to Mercer in regional action
SOMERSET — They were two young teams trying to survive the first round of the regional tournament, but one of them looked like they had been there before.

Mercer County had what Boyle County needed, and it showed in the way the two teams played Sunday in the first round of the girls’ 12th Region Tournament.

The Titans were more aggressive, more confident, more composed and more than the Lady Rebels could handle as they cruised to a 53-34 victory at Pulaski County.

While this wasn’t the day coach Ryan Wiersma hoped it would be, it was still an important day for the growth of a program that hopes to make a habit of playing in this tournament.

“If we learn and progress as a program, that’s the most important thing we can do,” Wiersma said. “At least that way when we’re back here next year we know how to handle that situation.”

The situation became unmanageable for Boyle (11-7) when Mercer (11-8) opened the third quarter in full attack mode.

Mercer led 17-5 early in the second quarter but just 27-21 at halftime. The Titans forced six turnovers before the Lady Rebels got up their first shot almost four minutes into the period. Boyle had nine turnovers and only one basket in a period in which it was outscored 12-4, and that basket came with five seconds left.

Boyle was led by Glasscock, the team’s only upperclassman, who had 11 points and nine rebounds in her final game. 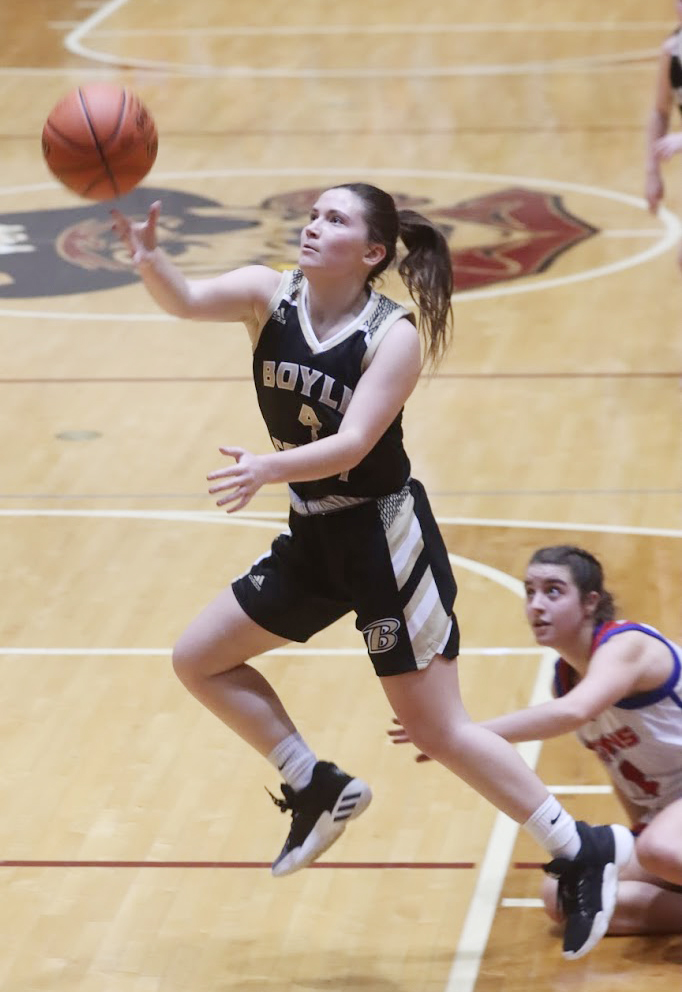 Emily Glasscock of Boyle County gets past Mercer County’s Anna Kate Drakeford for a layup attempt during the fourth quarter Sunday. – Photo by Mike Marsee

Glassock returned to the team last season after sitting out her sophomore year.

“Emily has come so far as a basketball player in the two years I’ve coached her,” Wiersma said. “And her growth is not just measured on the court, but (by) her leadership, her guidance for the young girls, her understanding of the game. … She’s done an amazing job helping us get to this point.”

Ella Coffey had eight points and Payton Bugg had seven for the Lady Rebels, who shot 24 percent from the field.

Wiersma said Boyle met two of its major goals for this season, winning more games than it did a year ago — the Rebels had three more wins in 12 fewer games — and making the regional.

“With a very competitive group it just feeds the fire. They know what it takes, and now they’ve worked hard to get here. But the goal’s not just to get here, it’s to move on from here, so they’re going to feed off that and get better every single day and learn from it.”