Abernathy shining on the diamond for UK 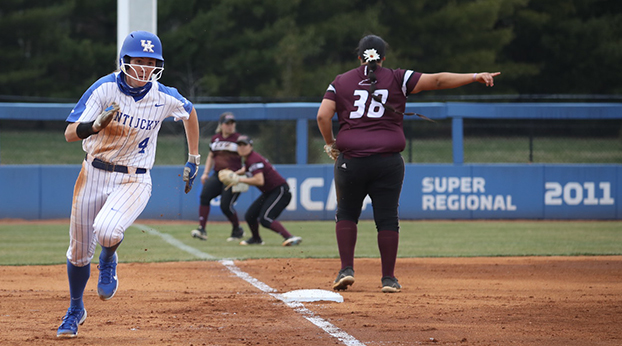 Kentucky won its first 20 games before losing to traditional Southeastern Conference power Florida and had a 23-2 record going into games this week, including the SEC opening home series against Alabama this weekend.

“I expected this kind of start. I really did,” said junior outfielder Renee Abernathy. “We were just so driven and worked really hard in the extended off-season. We were excited to finally get to play a game against other people.”

Abernathy had waited for her chance to play and has taken advantage of an opportunity to start this season. She hit .378 in the first 25 games, all starts for her. She has scored 15 runs and driven in 24 runs. She’s also managed to draw 10 walks and had been hit by a pitch five times.

Coach Rachel Lawson praised Abernathy before the season started and has not been surprised by what she’s done.

She admits she’s proud of her “hard work and determination” that has enabled her to take advantage of her opportunity this season.

“It was difficult to wait my time. I had to prioritize my development as a player and improve my skills,” Abernathy said. “I was never a starter (the previous two years) but I was doing stuff behind the scenes helping teammates. We always push each other.”

She credits former teammates Bailey Vicky and Alex Martens for showing her how to be a good teammate and make the transition to college softball.

Abernathy verbally committed to UK before her high school sophomore season. She liked the atmosphere and coaches at UK as well as the way Lawson prioritized career development.

“I am very much into my academics and career development was important to me,” said Abernathy, one of 24 UK student-athletes recently selected for induction into the Frank Ham Society of Character. “There were other schools I was considering but when coach Lawson started showing interest I knew where I was going.”

Lawson said it was easy to tell Abernathy was a player she wanted.

“Renee is a naturally-gifted athlete. She’s strong and she runs so well,” the UK coach said. “She’s also a very fun player to watch play the game. So she stood out with her versatility and the inner softball fan in me caught my eye.”

Abernathy, who plans to be a physician, knows the Alabama series this weekend quickly sold out and how exciting the atmosphere should be.

“The fans are just as anxious as we are, especially after the national quarantine,” Abernathy said. “People are wanting to get out and watch sports and just enjoy the atmosphere Kentucky brings. We hope we can put on a show.

“I am excited. We are excited to be back playing rivals and great competition every weekend. I think our coaches do a really good job preparing us for specific teams and pitchers we are going to face. A lot of hitting is based on preparation and trusting the preparation.”

Abernathy understands the value of preparation. She is a Human Health Services and has done extensive preparation for a career as a physician. No one else in her family is in the medical field but she enjoys learning “and in the medical field you have to learn and update your skills in medicine, techniques” all the time. She likes the challenge as much as the challenge of hitting a big-time SEC pitcher.

She acknowledges her academic workload can be very difficult and she will be taking her exam for medical school admission this summer.

“I have got a lot better at time management. That’s really a skill and I am very thankful I was required to get better,” Abernathy said.