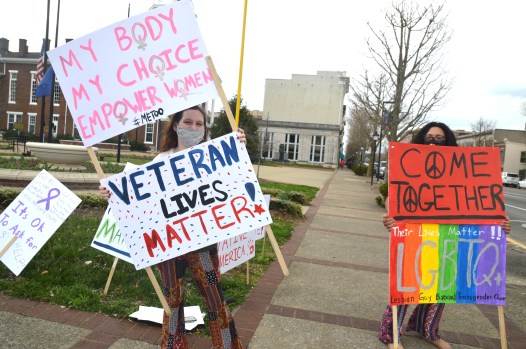 From left, Michaela Cole and Vera Benthall protest on the corner of Main and Walnut streets, near the Boyle County Courthouse. They protested for and against several issues, since they said a lot of things were on their minds. - Photo by Olivia Mohr 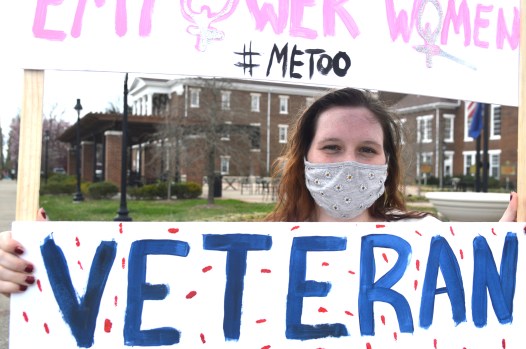 Michaela Cole is pictured holding signs advocating for women’s rights and that “veteran lives matter.” With the sign advocating for veterans, she said she wanted to make people aware of homeless veterans. - Photo by Olivia Mohr 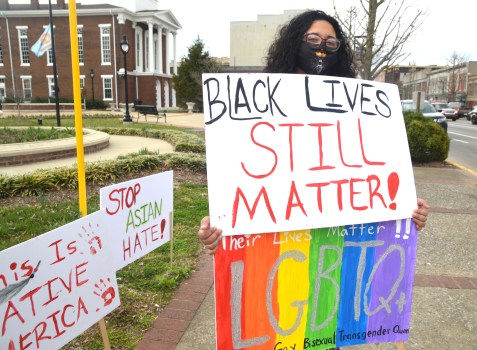 Vera Benthall is pictured holding a sign that reads, “Black lives still matter,” and a sign saying the lives of people in the LGBTQ+ community matter. - Photo by Olivia Mohr 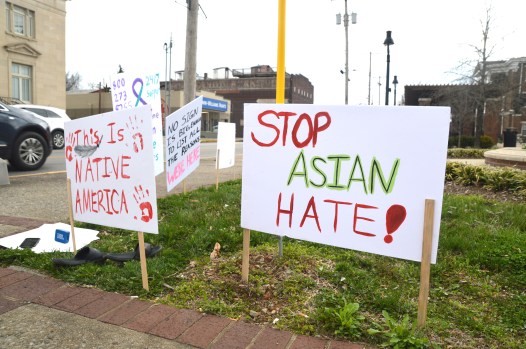 A couple of the signs protesters planted in the grass read, “Stop Asian hate” and “This is Native America.” - Photo by Olivia Mohr 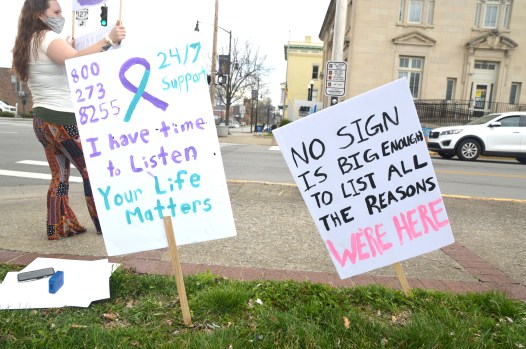 Next to a sign with a hotline number for suicide prevention on it is a sign that reads “No sign is big enough to list all the reasons we’re here.” - Photo by Olivia Mohr 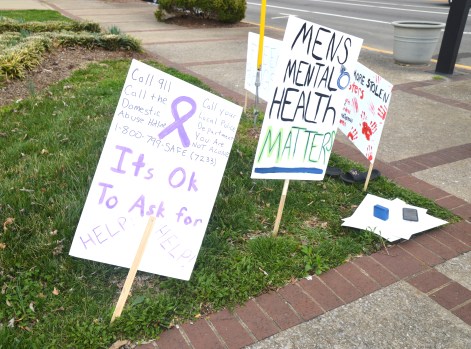 One sign pictured has a purple ribbon on it and says “It’s OK to ask for help” if someone is in a domestic abuse situation, with a hotline number on it, and another sign reads “Men’s mental health matters.” - Photo by Olivia Mohr 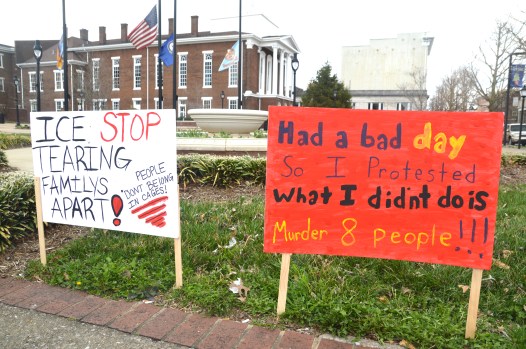 From left, a sign reads “ICE stop tearing families apart,” and “People don’t belong in cages,” and another sign reads, “Had a bad day so I protested — what I didn’t do is murder 8 people,” a reference to the shooter who killed eight people, six of whom were women of Asian descent, on March 16. - Photo by Olivia Mohr

Michaela Cole, 23, and Vera Benthall, 26, stood out on the corner of Main and Walnut streets, by the Boyle County Courthouse, for a protest on Wednesday from morning into the afternoon. They stuck signs in the grass, now a saturated green with the coming of spring, taking a stance on a variety of issues. It was important to them that they weren’t just communicating one idea, since a lot was on their minds.

These were just some of the messages painted on to the signs they brought with them. Also on the signs were suicide and domestic violence hotline numbers and a call to U.S. Immigration and Customs Enforcement that “people don’t belong in cages” and other messages.

For a while, it was just Cole and Benthall out on the corner, but throughout the day a couple more people joined them. The two women had reached out Tuesday morning on the Facebook group “United for Change” about the protest.

Cole said since protests in June for the Black Lives Matter movement, protests haven’t happened as often, and one of the things the women wanted to accomplish was to remind people of issues that still exist and encourage them to speak up themselves. Benthall said they had gotten some hate comments and harsh words from a few people in their cars driving by, and one thing people said was that “nobody cares about that stuff in a small town,” that the women were “creating chaos where it shouldn’t be,” and that everyone in town got along.

“Which we do not, because we’ve already got cussed out this morning,” Benthall said.

Cole and Benthall also got positive community responses — some people passing by in their cars honked and waved, or raised a fist or shouted from their cars in support.

Cole said, “We’re trying to show Danville that people still care because yeah, there’s people who hate, but there are also people in these communities that feel strongly about these things but don’t feel like they have a voice to be able to come out here and say it.”

And the women don’t feel like there should be a particular time and place to show up and speak up about an issue.

Cole said in some community responses to their protesting, they “got a lot of ‘all lives matter.’”

“We’re trying to get all lives to matter right now,” she said. “We’re trying to get people to understand that. But you can’t have all lives if women are still being degraded, when people of color are being murdered, when people in the LGBTQ+ community are being murdered because they are who they are and they love who they love.”

The point, she said, was not to turn people or issues into a hierarchy but to speak out against issues that disproportionately affect certain communities or demographics. Their protest was also in response to some recent events, like the shootings at three spas in the Atlanta area on March 16, during which a white man killed eight people. All but one of the people the man killed were women, and six were women of Asian descent, according to the New York Times, prompting a discussion about fetishization and misogyny toward Asian American women — according to the article, the suspect said he had a “sexual addiction,” and he carried out the shootings to “eliminate his ‘temptation.’” Other violent acts toward Asian Americans, particularly during the COVID-19 pandemic, also have prompted a discussion about hatred toward people of Asian descent.

Benthall said another thing on the her and Cole’s minds was that a close friend recently told them she’s had 17 miscarriages, and she’s asked her doctor for a hysterectomy, but the doctor won’t perform one.

“We’re not allowed to decide what happens to our own bodies, whether it’s abortion, whether it’s a hysterectomy, whether it’s tubes tied,” Cole said. “It doesn’t matter what we ask for — we’re always too young, and we don’t know what we’re talking about.”