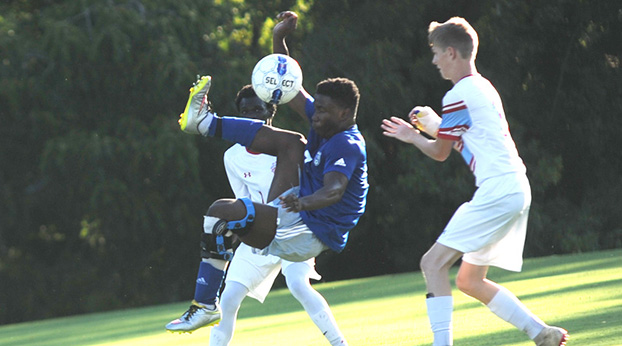 Remi Forlevil, a Danville High School student and soccer player who battled cancer until he died March 4, is one of the student athletes being honored April 29 for the annual BGO Night of Champions, at the Marriot Griffin-Gate in Lexington at 6:30 p.m.

Remi Forlevil
During a mission trip, the Morgan family met a young Haitian boy, Remilson “Remi” Forlevil. Remi had a tumor on his face the size of a softball that had been there for most of his young life. The Morgan’s church and community were able to bring the 12-year-old Remi to the United States for the surgeries needed to remove the tumor. Through that process, the Morgan family and Remi formed a strong bond that resulted in him joining their family to stay in the US.

Remi thrived in school and soccer. He was showing signs of greatness on the soccer pitch through club, middle school, and his freshman year at Franklin-Simpson.

Unfortunately, he missed his sophomore season due to an ACL injury. The summer before his junior year, he moved to Danville, where he joined a new team set to have a record-breaking year. Remi ended up being one of the top goal scorers while the team finished the 2019 season as both district and regional champions.

Remi was a physical beast who worked hard and made a name for himself, and in doing so, created many opportunities for his future.

One day in the spring of 2020, Remi began having headaches and trouble with his balance, resulting in a fall. After tests and scans, Remi was diagnosed with pediatric glioblastoma, a form of brain cancer. This was a devastating blow to Remi and the Morgan family. Unfortunately, Remi’s summer and fall months were filled with surgeries, tests, steroids, radiation, and chemotherapy. Miraculously, however,they were also filled with soccer practices and games. Not only did Remi go to almost every practice, but he also started every game of the 2020 season. His dedication was unparalleled. He loved playing and being with his teammates.

Even as cancer and his treatments started breaking down his body, his spirit and smile never stopped shining.

During his recovery, Remi had a Zoom meeting with Kaley Cuoco and Johnny Galecki from the cast of The Big Bang Theory. While wiping the tears from their eyes, Galecki and Cuoco told Remi that his determination and commitment were so inspirational that the world needed to hear his story. They also shared how they loved his contagious smile.

Regrettably, during this past spring, Remi’s health took a turn. During the time the Night of Champions committee was reading through nominations, Remi was bed-bound at home. Just days before this announcement, while surrounded by family, Remi passed away peacefully. According to his obituary on W.L. Pruitt Funeral Home’s website, he died on March 4, 2021.

Remi was a true Champion, overcoming much in his young life. His tragic story is an inspiration, and he and his family deserve his story to be remembered.

Unfortunately, during the summer going into her Freshman year, Shelby suffered a torn ACL and meniscus that would require surgery. Later that year, while progressing through her recovery, she required another surgery to improve her range of motion after scar tissue built up in her knee. Thankfully, her rehabilitation allowed her to run track her freshman year and ended the season winning a Region title in the 400m and earned 9th at the State Meet.

During her sophomore year basketball season, Shelby played well and earned an MVP award during the District Championship game, despite re-injuring her knee that week. After this minor setback, she was able to run track that spring, running well until another knee injury just before the State Meet. This time, while playing summer basketball, a fully torn ACL and LCL would mean an even longer recovery. First, a bone graft correction procedure in July, then a second ACL and LCL reconstruction in January the following year.

After the second procedure, and 10 long months of diligent rehabilitation, Shelby was released to participate in basketball in November of 2020. Over her high school career, Shelby has spent 25 months in rehab overcoming multiple injuries but has always returned and excelled both in sport and in the classroom.

Shelby’s basketball coach, Chris Adkins, had this to say about Shelby: “These events, coupled with the current COVID pandemic, have put constant obstacles in Shelby’s life, but she has worked and worked to overcome these adversities. I truly believe her story personifies the meaning of the word ‘perseverance’ and makes her an excellent candidate for this scholarship.”

We will be honoring these student-athletes on April 29 at 6:30 p.m. at the Marriot Griffin-Gate. Our emcee and host will be Brian Milam, WKYT’s Sports Director.

Our keynote speaker is Olympian Dallas Robinson. Robinson, a graduate of Oldham County High School, Eastern Kentucky University and Campbellsville University, is a hall of fame athlete and coach. During the entire time Robinson was a soldier and a Team USA athlete, he was also a high school and collegiate track coach and continues to coach today.