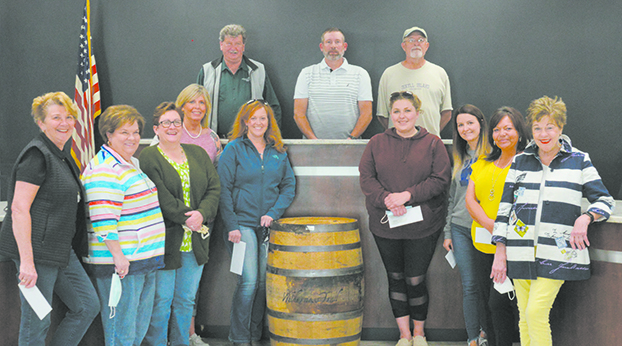 Ten Perryville businesses that suffered financial strain because they were forced to close during the height of the COVID-19 pandemic received some support from the city.

During an informal presentation at City Hall on Wednesday, Mayor Brian Caldwell told the group of mostly women business owners, that the city had $12,400 left over from its COVID relief funds.

“We had some left over, and through some digging that (City Clerk) Mary (Sleet) had done, found out that we could give it back to the brick and mortar businesses.

We know it’s tough on you guys that had to shut down during the pandemic.”

Caldwell added that each business received a check from the city for $1,240. “It’s not a lot, but it’s what we’ve got left. … We’re just glad that we could.”

“Mary has done a lot of work on this. It came down from the governor’s executive order and funneled through the Department of Local Government, where we initially got our COVID relief payments,” Caldwell said.

After receiving their checks, the group, along with the mayor and council members Tim Lanham and Steve Bailey, gathered for a group photo. Someone said,

“We’ve all struggled through it,” which was answered by others agreeing and saying how grateful they were for the help.

Stephanie Gilpin who owns Bargain Barn Consignment said she was very grateful as well, and has plans for the extra money. She said, “It’s going toward rent and utilities!”