Bonnet Day was a special event at Garrard County church 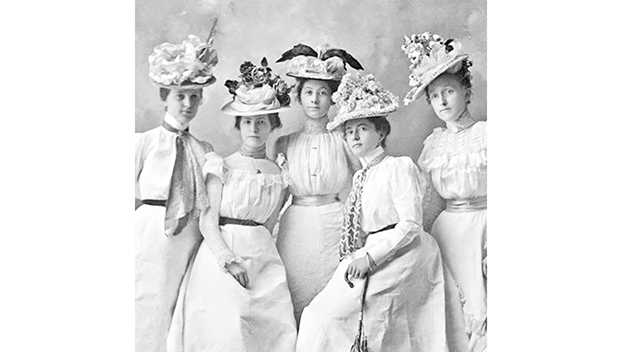 Picture taken from Wikipedia show the bonnets that were in fashion in the 1890s.

Women in Central Kentucky were busy in the spring in the late 1800s getting ready to show off their new spring bonnets in at local churches, according to articles in The Kentucky Advocate.

“Women at The ‘Fork’ Church in Garrard County have been scurrying around lately in preparation for the annal Bonnet Show Day at the Fork Church,” according to an article in the May 15, 1891, edition of The Kentucky Advocate.

Those unfamiliar with the event had been noticing milliners were unusually busy the week before the event and wondered why.

“Nearly every buggy and horse in the livery stables were engaged and Danville will be well represented.

“Bonnet Day at “the Fork” has attracted a large crowd, and the attendance this year promises to be greater than ever.

“The boys from three counties, from Sugar Creek to Mundy’s Landing, will be there to see the girls and the girls will be here to see the bonnets; and the poor creature who has on an aged or a “done-over” hat will, in the language of poet, be not in it.

“The good brother in the pulpit will preach about “Sounding Brass and Tinkling Cymbals” and the crowd next year will be larger than ever,” the preacher said.

“Bonnet Day always comes when strawberries and spring chickens begin to ripen and the good dames in the Fork neighborhood will see to it that all who pull the ever ready latch string will find the dinner in keeping with the excellency of the sermon, the beauty of the girls, and the handiwork of the milliners and the gallantry of the beaux.

“Sunday is Bonnet Show Day in May 1890 all over the country and if the day be crowned with bright, warm sunshine there will be a great display and large variety of styles of bonnets to be seen.

“No doubt the annal Bonnet Show in Garrard County will draw a large crowd of the curious from all of the adjacent counties, as it has not failed to do so for many years.

In May 1890, over 700 of the “fairest and most gallant” women through out Central Kentucky participated in the annal Bonnet Show at the Fork, and at Ironside Baptist Church about five miles north of Lancaster.

The lowest estimated places the amount of money invested in millinery shown at $1,500.

A similar bonnet show is held at Ironside Church in Bourbon County every spring.

Barring a little shower which fell about noon Sunday, the sisters had a glorious, sunny day with balmy breezes for the Bonnet Show Day in Garrard County.

“Many of the women are said to have been at the old Fork Church, and of that number we doubt not a single one was sorry she had worn the best head gear she had.

“To borrow a few words from Brother Falcon:

The sky was blue and the grass was green.

The great trees were full of foliage lights and shadows played hide and seek upon he soft sward, and presented as bright a picture as even the heart of the Bluegrass Kentuckian can desire. Sweet sisters were there in great shape, and immense numbers. Bless their little hearts, it would have been but a dull occasion but for them.

“Everyone of them belong to the church militant and was determined to make it a church triumph before the meeting closed.”

The livery stables of Danville were taxed to their accommodating limit to furnish vehicles to the young bloods from Danville, and still many were left behind for want of a conveyance.”

We have a chance to rethink time